The winner of the last Pro Bike & Sled Series presented by Wiseco Performance Products event will be back for the 2012 season.

"We’re going to give it a go," said Pro Bike rider Ted Glinny, who won the 2011 season closer at the Cayuga Dragway. "I’m in the process of building a good motor for the season."

Glinny, who has been drag racing motorcycles for over 30 years, rides a 2000 Kawasaki Ninja powered by a 1425-cc engine. The engine is fueled by a Lectron system, and employs a GPZ 1-2 automatic transmission which resides in the FBG chassis. The bike is capable of quarter-mile times in the mid eight-second range at speeds over 140 mph.

Glinny said he has only raced motorcycles during his racing career, and only in drag racing.

"Drag racing is fast," he explained, "but it’s a controlled environment. You don’t have to worry as much about the other guy as in road racing or motorcross."

Crew chief for the Glinnja Racing team is Harry Manovich. Glinny’s son Jay and daughter Nicole are also part of the crew, as well as brother-in-law Marty. 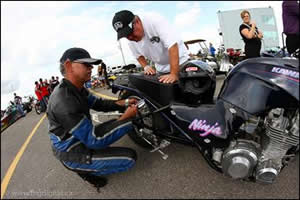 Glinny said he enjoys racing in the PBSS, and also appreciates the friendly helpful atmosphere of the racing, with racers helping each other between rounds. But, he added, the mood changes when the racing starts.

"We’re all friendly in the pits, he said. But when the helmet goes on it’s everyone for themselves."

The PBSS gets underway this year with the season-opening Victoria Day Weekend Challenge at the Cayuga Dragway of Toronto Motorsports Park May 18-20.

/ This email address is being protected from spambots. You need JavaScript enabled to view it.

When Brett McCormick agreed to travel to Bahrain to test the 2020 Ducati Panigale V4 S he left Canada with visions of desert heat, but Mother Nature can be fickle,…