The Moto Guzzi V7 Racer is inspired by the company's cafe racer heritage.

The latest motorcycles to come from the production line of the original Moto Guzzi factory in Mandello Del Lario, Italy are the 2013 V7 Racer, V7 Stone and V7 Special. These three models were inspired by Moto Guzzi’s café racer heritage and historic culture. The new V7 models skillfully reinterpret the iconic 1967 V7 Sport, with a jaw-dropping blend of vintage craftsmanship and modern technology.

The 2013 V7 Racer is an ode to café racer motorcycles from the ‘50s and ‘60s with the performance of a modern machine. The V7 Racer has a new 750cc, 90-degree V-Twin motor with increased torque, horsepower and throttle response.

The new V7 Racer features a myriad of unique style attributes — from a chrome fuel tank studded with red Moto Guzzi badges and finished with a handsome leather strap, to a suede leather seat with an aerodynamic seat cowl and ‘70s-style racer number plates. The V7 Racer is perfect for an adventurous rider with an eye for design and a wild streak. The 2013 V7 Racer is available in Chrome.

MSRP is $10,190 and is now available at Moto Guzzi dealerships across Canada.

The 2013 Moto Guzzi V7 Stone is the sibling to the V7 Racer, perfect for riders that want to make a more subdued and classic style statement. The V7 Stone features the same new and more powerful, 750cc, 90-degree V-Twin motor and new lightweight, six split spoke alloy wheels. The matte black tank and the chrome accents make the V7 Stone a showstopper at any café, restaurant or local hot spot. The 2013 V7 Stone is available in Matte Black and Pure White.

MSRP is $8,590 and will be available in January at Moto Guzzi dealerships across Canada.

Just like its predecessor, the V7 Special wrapped in a two-tone colour scheme and equipped with spoked wheels with aluminum wheels. The new engine, significantly more powerful, is perfectly suited for medium range touring and contributes to low fuel consumption and greater tank capacity. It proves a worthy touring machine with bags and windshield, accessories which go well with the overall design of the V7 Special. The 2013 V7 Special will be available White/Red Metallic and Yellow/Black Metallic.

MSRP is $9,490 and will be available in January at Moto Guzzi dealerships across Canada. 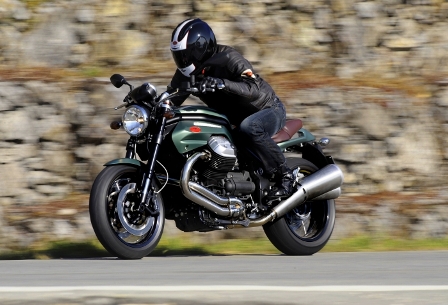 The Griso 8V SE (above) is one of the most unique and captivating motorcycles to come out of the Mandello del Lario factory. The bold character expressed in the nonconformist styling of the Griso is given further emphasis by the aggressive new model year 2013 black/silver color concept in a matte tone that flows elegantly with the numerous black painted metal elements such as the frame, wheels, steering plates, handlebar and instrument panel covers.

With 110 horsepower and 80 ft. lbs. of torque, the Griso 8V SE was made for canyon carving, surprising even the most seasoned sportbike rider with its power and handling. The Griso 8V SE is available in Black/Silver Devil.

MSRP is $13,590 and is now available at Moto Guzzi dealerships across Canada. 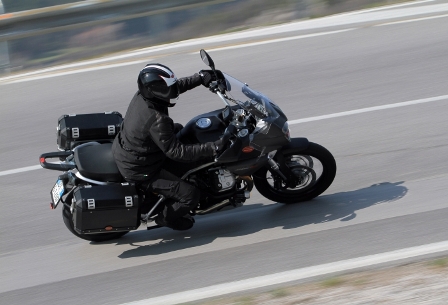 Moto Guzzi’s adventure-tourer has returned with a vengeance. The Stelvio (above) has reached a new level thanks to the technical and functional upgrades on the new Stelvio 1200 NTX. Named after the famous Stelvio Pass in the Italian Alps with 84 amazing hairpin corners, the Stelvio 1200 NTX brings together Guzzi character with state-of-the-art performance and design.

MSRP is $16,190 and will be available in the Winter of 2012 at Moto Guzzi dealerships across Canada. 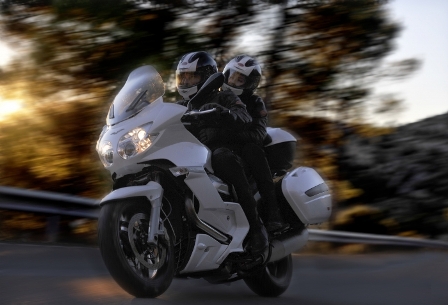 Named in celebration of Moto Guzzi’s 6,437km journey to the Arctic Circle in 1928, the Moto Guzzi Norge GT 8V (above) is born to satisfy riding pleasure without giving up comfort: fast and exciting to ride like a street bike, comfortable and safe just as a touring bike. The Norge GT 8V offers 102 hp and 1200cc of displacement with standard touring essentials such as heated grips, electrically adjustable windscreen, side bags and ABS. The Norge is available in Competition Black.

MSRP is $16,290 and will be available in the Winter of 2012 at Moto Guzzi dealerships across Canada.

For more information on any of the Moto Guzzi models please visit motoguzzi-canada.ca and the all-new Guzzi microsite, motoguzzioriginals.com, which provides users with insights on Guzzi’s history and heritage from the perspective of Moto Guzzi designers, owners and of course, the Guzzisti.