by Michel Mersereau
in Feature Stories
0

Bicycles, bicycles everywhere. If you spend any amount of time riding in or near an urban centre, chances are you’re familiar with the various forms of bicycling infrastructure being deployed in cities across Canada. Depending on where you live, you may encounter bicycle lanes delineated by simple pavement markings all the way up to physically separated lanes. Regardless of the different approaches your municipality may take, the basic idea is the same across the board; to provide cyclists with a “safe” space to operate on our roads.

One of the major problems in trying to manage our way around bicycling infrastructure is that there’s little consistency in the physical layouts, lane markings, or signage used from one street to the next, between different municipalities themselves, or in the messaging we receive from city officials and police, or from bicycling and driving advocates.

There are three basic types of bicycle lanes used by most major municipalities (Figure 1); the dedicated lane using only painted markings, the dedicated lane using a physical barrier, and the shared lane (where cars must yield 1 meter of space when cyclists are present). Add some conventional wisdom around road markings and most of us are able to figure out the basic rules around access to these lanes; solid line = no entry, dashed line = crossing path. 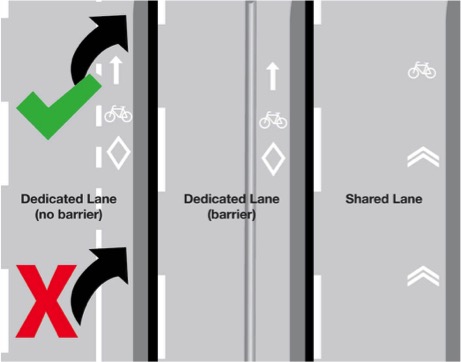 Seems simple enough, but the problem isn’t the types of lanes or the markings themselves, it’s that they are applied in different ways under different conditions, and often without any signage that would help other road users understand the reasoning behind those differences. The scenario below illustrates 4 different bicycle lane scenarios, each placing different restrictions on other road users, that are present on just one street in a major Canadian city (Figure 2). 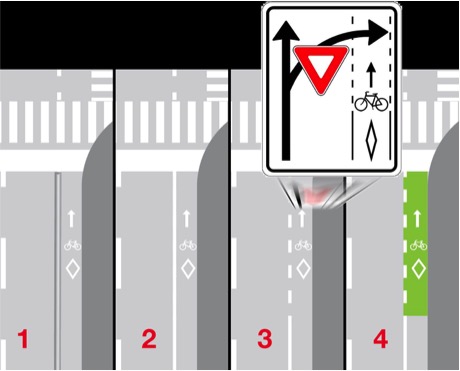 Scenario 1 is straightforward, illustrating a bicycle lane with a physical barrier. Move a little down the road and you’ll encounter scenario 2, where the physical barrier is replaced by a dedicated lane with pavement markings. Note the solid line leading right up to the intersection, which seems to prohibit drivers from entering the bicycle lane at any point while making a right-turn (though there’s no signage to indicate why). A little further down and you come to scenario 3. Here, there is a dashed line leading up to the intersection to indicate where right-turning drivers may cross the bicycle lane while executing their turn. Pay attention to the signage in this scenario, however, which instructs drivers to yield right-of-way to bicyclists proceeding through on a green. This sign also instructs drivers that the turn must be initiated from the driving lane, meaning they cannot otherwise stop in or impede the bicycle lane while waiting to turn. We next arrive at scenario 4, a real mind bender. As with the previous scenario we have a dashed line leading up to the intersection, but with no yield sign, and instead a green painted bicycle “priority” box painted on the ground. As the name implies, these boxes give provide dedicated space for bicyclists at the front of the traffic line. Because there’s no yield sign in this case, are drivers to assume that they are otherwise allowed to enter the bicycle lane while waiting to turn? If so, and considering the green box is meant to prioritize bicycles over cars, what happens if a bicyclist approaches from behind while they’re waiting in that lane? Depending who you ask, some stakeholders advise approaching bicyclists to manoeuvre around the left of a stopped vehicle (and potentially into the adjacent or oncoming lane… yikes!).

Luckily for motorcyclists, there are two simple and straightforward tactics we can employ to manage the myriad of bicycle lane scenarios we will encounter, and to help us maintain a friendly relationship on the road with bicyclists; strategic lane positioning and observation checks. As a general rule, you should attempt to occupy the left tire track of the rightmost lane as much as possible. This basic lane positioning tactic serves many functions, but for the purposes of our discussion it also means that you’ll be giving bicyclists the minimum 1 meter of space required regardless of the bicycle lane situation you’re faced with (Figure 3). When positioning yourself for right-turns you should attempt to angle your bike towards the right while stopped (Figure 4). This tactic will not only make it a bit easier to execute the turn itself and provide you with a more visible profile to cars approaching from behind, but it will also direct your peripheral vision down the inside right of the lane, and increase your odds of spotting any approaching bicyclists. When positioning for left-turns, however, it’s not advisable to angle your bike to the left. Instead, try to get into the habit of doing a blind spot check to your left prior to executing the left-turn. The left-turn blind spot check is, unfortunately, often overlooked by riders and drivers alike. This simple oversight has the potential to be catastrophic, especially in an urban setting where left-turning bicyclists will often undercut you when making their turns (Figure 5).

Our roads are becoming more congested, and cities and towns across the country are taking big steps towards deploying bicycling infrastructure as a road sharing measure. While it’s always advisable to familiarize yourself with the rules and protocols governing bicycle lanes in your area, the basic lane positioning and observation tactics covered here will help you manage the majority of scenarios you will encounter.

Michel Mersereau is a Senior Instructor with the Rider Training Institute based in Toronto.

BLAZUSIAK AND WALKER READY TO RACE 2020 SUPERENDURO SERIES ROUND ONE

BLAZUSIAK AND WALKER READY TO RACE 2020 SUPERENDURO SERIES ROUND ONE