Toronto, ON – April 2, 2019 – The newly-formed Classic Superbike Racing group will host their first-ever event at round two of the 2019 Mopar CSBK Superbike Nationals at Grand Bend Motorplex, June 7-9. The just-launched CSBR series, “dedicated to the preservation and racing of classic superbikes,” is focused on first-generation machinery from the late-1970s and early 1980s.

CSBR have races scheduled for on both Saturday and Sunday afternoon at Grand Bend’s CSBK National. The series will use the 11-turn, 2.2 km long “technical layout” of the popular multi-use venue on Ontario’s “west coast,” just minutes from the southern shores of Lake Huron.

Support for the inaugural CSBR event will come from local, sister auto dealers Goderich Toyota and Goderich Honda. Trophies and prize monies will be awarded to the top three finishers, and a special award will be offered for the “most accurately preserved and raced Classic Superbike.”

Overall, the CSBR rules structure is aimed at street-based machinery produced between 1978 and 1983, with categories for middleweight, 750cc and the featured open class: 900cc to 1100cc. Specific details are available on their web site, classicsuperbikeracing.com.

If the debut event at Grand Bend with Mopar CSBK is a success, the Classic Superbikes have a commitment to take part in the big National series finale weekend at Canadian Tire Motorsport Park, August 9-11.

“We believe that this is the right time for a specific series geared towards these classic superbikes,” explains Ruston. “There is lots of interest in these machines, as recent events in California at Sears Point and Philip Island in Australia illustrate.

“We have the 40th anniversary of Superbikes as the main National class in Canada coming up in 2020, so this is the right time to showcase the bikes that were the first step to our modern era of racing. Fans love these machines, and we have a group of dedicated competitors who love to race them.”

Long-time early-era Superbike supporter and ProStar Motorsports owner Gartner sees the CSBR series “as the right idea whose time has come. There are some great bikes out there, and more in development – we can find the parts, and support the class with expertise.”

The main National group for all Vintage competition in Canada, the Vintage Road Racing Association, are hosting a four round 2019 series for every class of classic machine, starting with May 31 to June 2 at Shannonville Motorsport Park, near Belleville, ON.

Tim McGill snapped hundreds of colourful shots for Inside Motorcycles at round 2 of the Mopar Canadian Superbike Championship in Grand Bend, ON, June 9-11. Here's another assortment of images from "The Bend" - enjoy!

A brief collection of front-runner images from CSBK round 2 at Grand Bend Motorplex, June 9-11.

Ben Young had a nasty highside while in lead contention during the Pro Superbike final at the Mopar Canadian Superbike Championship round at Grand Bend on June 11. Young originally laid motionless on the track but eventually walked away from the incident.

The former champion competed for Turner Racing in 2014 and took home three wins during the season. The Nitro Harley championship came down to the final race at Memphis International Raceway with four drivers competing for the number one spot. Scott was leading the standings and did not advance to the final round, a win by his teammate, Jay Turner, against Randal Andras sealed the deal.

Scott intended on running the entire Nitro Jam season in 2015 but work commitments did not allow his full-time return. He was able to schedule time off to race in both Canadian races this year and will compete in the Nitro Harley class with his former team, Turner Racing. The goal for Scott is to come back full force in 2016 and win championship number two.

This year's Mopar Nitro Jam Nationals marks the 15th consecutive year the IHRA has traveled to Grand Bend Motorplex to celebrate one of drag racing's biggest and most exciting events. The 2015 IHRA Mopar Nitro Jam Nationals will feature three full days of drag racing action in six professional categories and 10 sportsman categories with qualifying on Friday, June 26 and Saturday, June 22 and eliminations on Sunday, June 28.

Ticket fees and HST tax will be added to your order when you checkout. All tickets include a free pit pass. Order in advance at: www.nitrojam.com.

The CMDRA returned to Ontario’s Grand Bend Motorplex on June 21st and 22nd as the Screamin’ Eagle V-Rod Destroyer series entertained over 20,000 race fans as part of the IHRA Mopar Nationals.

Hope Returns to PBSS in healthy form for 2013 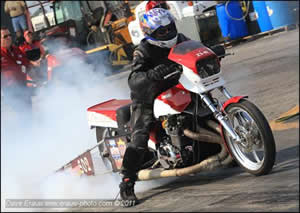 After a year’s absence, the 2011 Pro Bike & Sled Series champion is returning to the track in this exciting drag race series.

London’s Randy Hope will be back aboard his 1978 Kawasaki Z1R ready to race in the PBSS, which is presented by Wiseco Performance Products.

"We are getting the bike back together," said Hope, who rides in the Pro Bike class. "Other than some new wheel bearings, the bike is about the same."

Grand Bend Motorplex’s massive All-Bike Race Weekend is even bigger this year!  This weekend's event (June 16-17) will not only feature huge fields of motorcycles drag racing on the quarter-mile, but the SOAR road racing series will increase the scope of the event significantly, providing non-stop action for all types of racing fans.