The wakeup call came early at 4:30 am. The predicted rain was indeed falling. A sane man would have returned to bed after looking out the window, especially when faced with a two-wheel rally covering over 700 kilometres. Only a mad bastard would suit up, hop on a scooter and head over to the start line.

That’s right — 700 km on a scooter. That distance is tough enough in a car, and produces bragging rights when completed on a motorcycle. On a scooter, it’s epic.

2011 marked the fifth running of the Mad Bastard Scooter Rally, and almost 100 assorted mad men and women signed up for the privilege of abusing both their bodies (especially their buns) and their scooters. Beginning and finishing in Barrie, Ontario at the Holiday Inn, the rally’s course covered a back road loop through the Muskokas. Up for grabs was a first place prize from event co-sponsor KYMCO; a custom-finished People S 125 scooter.

Although you must finish within a certain time, finishing time does not decide the victor. Providing proof-of-passage gas receipts is essential, but points are what really count — mad points, that is. Costumes are worth points; so are artfully (or un-artf

ully, for that matter) decorated scoots. This edition saw Santa Claus, Super Mario Brothers, and some enthusiastic Quebecers reminding all that this was also St. Jean Baptiste Day in La Belle Province. 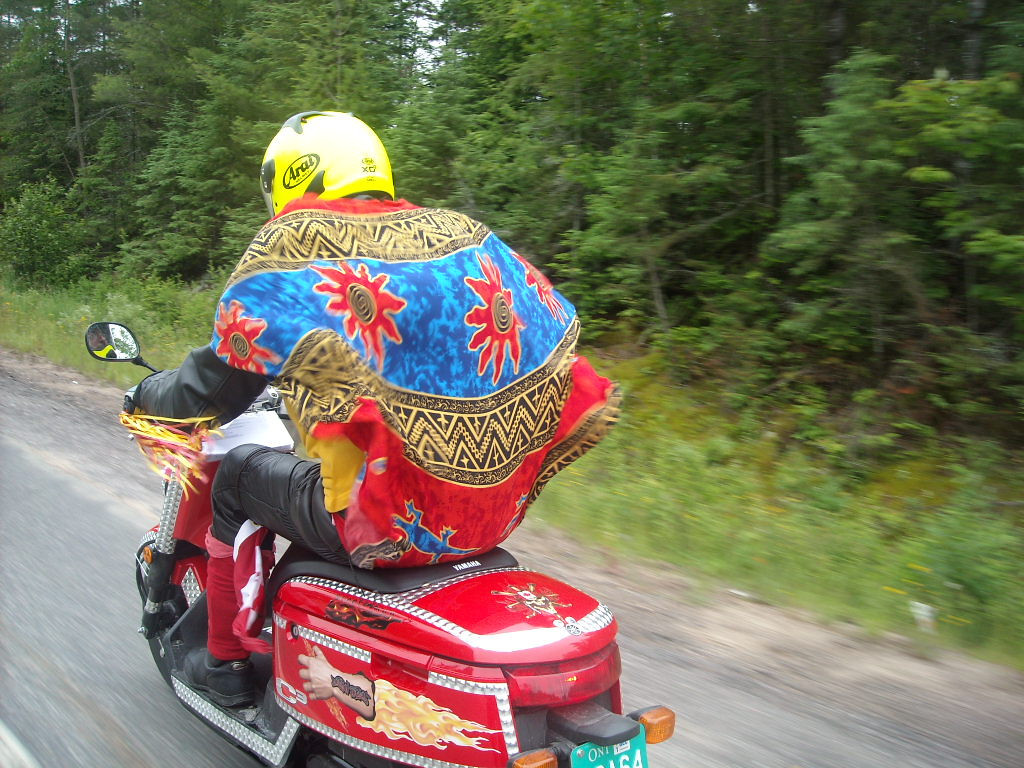 Dare to be different.

Acts of madness during the rally are rewarded as long as there is photographic evidence. Every competitor could submit two pictures recording said acts, usually involving some kind of near illegal behavior, for bonus points. This year there was only one bare bum pic but dozens of, let’s say, “suggestive” acts on record. Possibly the most impressive act was not mad but certainly applause worthy; one competitor pulled over at a promising roadside lake to cast a line and promptly managed to reel in a fish longer than his arm!

Not all scooters are created equally, so classes are divided by engine capacity:
Straitjacket Class — 50 cc and under
Heavily Medicated — 50 cc to 110 cc
Therapy Required — 110 cc to 200 cc
Day Release — greater than 200 cc

Of course, there are points for engine capacity, with tiddlers being rewarded with the most mad points and the larger classes receiving the least. Age counts too, the older scoots get bonus points as do the riders themselves. As mentioned by rally master Rob Harris, it’s rare when both old age and small size are rewarded.

Harris organized the first edition of the rally back in 2004 as a result of a scotch-fuelled evening of “I dare you to . . .” when presented with a scooter to test for an online publication. Five brave lunatics accepted the dare the first year, but word spread fast over successive runnings of the event resulting in this year’s record-breaking list of 92 entrants.

I had completed, just barely, the 2007 edition of the rally on a veteran Italian Postal Service Vespa prone to moments of petulant behaviour that left me cursing Piaggio engineering in several eastern Ontario gas station parking lots. Not this time. The kind folks at KYMCO remembered my previous struggles and offered the use of a brand new ride for my 2011 attempt.

The oddly named Frost 200i (odd in that its displacement is 175 cc) proved to be more than up to the task at hand. This is a sharp looking scooter with all the right bits and enough engine to comfortably cruise at 95 to 100 km/h on the Queen’s highways. Disc brakes front and back brought the fuel-injected 4-stroke Frost to a stop without fuss. The suspension, while not up-to-date, is dialed in for coping with the frost heaves of Ontario’s back roads. There was none of the usual harsh reaction to rough roads associated with scoot forks and shocks; if you don’t notice them, they’re working. 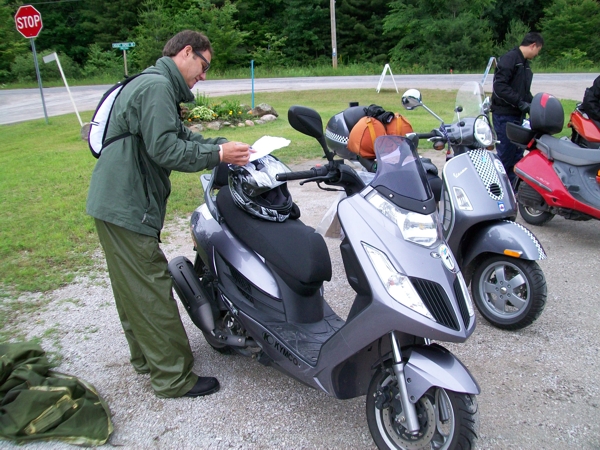 Both the 11-litre gas tank and cavernous under-seat storage are opened through ignition switch positions that are a bit tricky to find at first, but save the trouble of separate locks for each application. Fuel economy is absolutely excellent — two and a half tankfulls got me through the route — and a pair of full-face helmets can easily be stored under the slightly awkward step-up seat. While comfortable, the knees-higher-than-the-butt seating doesn’t agree with all pilots.

Quality is excellent throughout – there are no rattling bits, the bodywork is tight and aligned, and the digital dash (once mastered) would satisfy NASA’s requirements. This would make for a terrific commuter ride – comfortable at both highway and city speeds, and miserly on fuel.

The best feature was the deceptively small windscreen. I’m six-foot tall and suffered no wind buffeting at any speed. KYMCO’s designers get big points from this rider with that faring design. I never felt like I was hanging on and finished the route without the knot in the neck that I was anticipating.

The Taiwanese manufacturer is still not on the radar with Canadian riders despite a large dealer network. If you’re making a step-through purchase, KYMCO deserves equal consideration with the big Japanese and Italian brands; the quality is that good.

Back to the rally. Once again, Mr. Harris has provided the mad bastards with a wonderful route. While it’s tough to map a ride that avoids major highways, the upside is that secondary roads make for terrific riding. As well, it’s no wonder Muskoka cottages list in the millions of dollars; it’s beautiful country up there.

Too bad about the weather — never really sunny and never really dry. Most rally goers had to cover their costumes in rainsuits. For all those who ignored the conditions and displayed true madness, this competitor hangs his head in shame.

I struck out on my own in the drizzly dawn just after 5:31 am at the beginning of the Day Release departure window and soon caught up with the smaller-engined scoots that had started before my wake-up call. Start times are by displacement and in one-minute intervals: the smaller the scoot, the earlier the start. Straitjacket contenders hit the line at a brutal 4:00 am while the largest displacement riders are still sleeping. 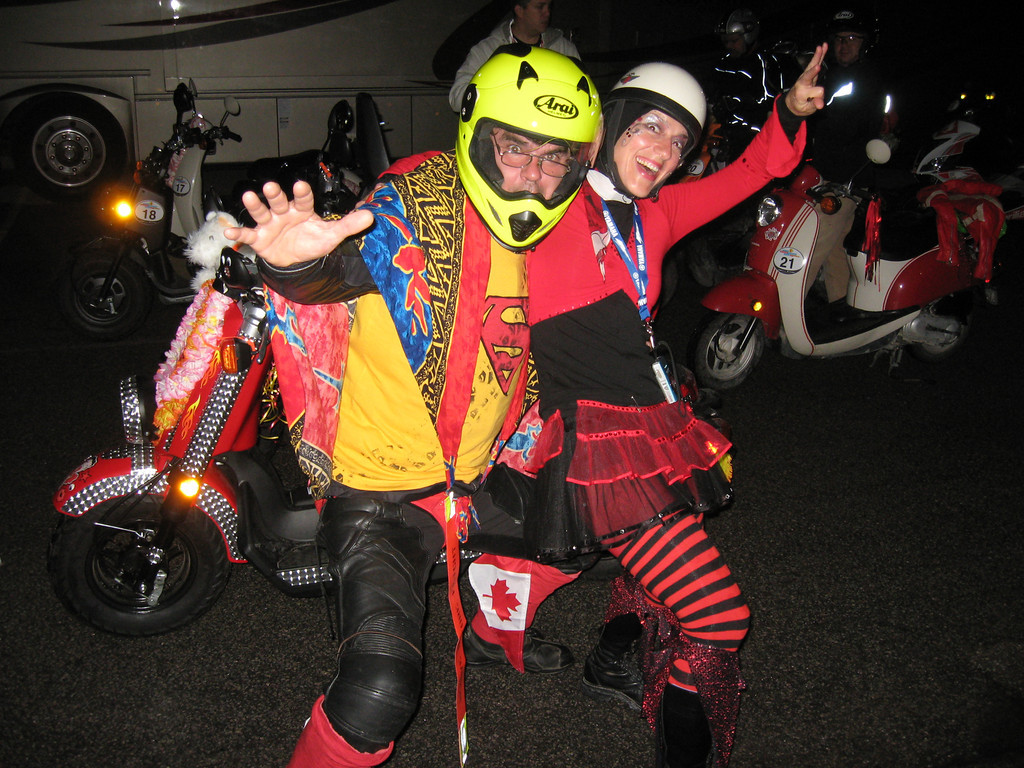 Coffee and delirium are the only explanations for this type of energy at 5 am.

There’s a scavenger hunt option to the rally that educates (lots of historical sites), humiliates (points for kissing a surprisingly patient waitress at a roadside diner) and sprains the road-weary brain (add up the total of the Summerland General Store pay phone number). These points are critical towards the victor’s total, but it’s the bonus loop that separates the mad from the truly mad. 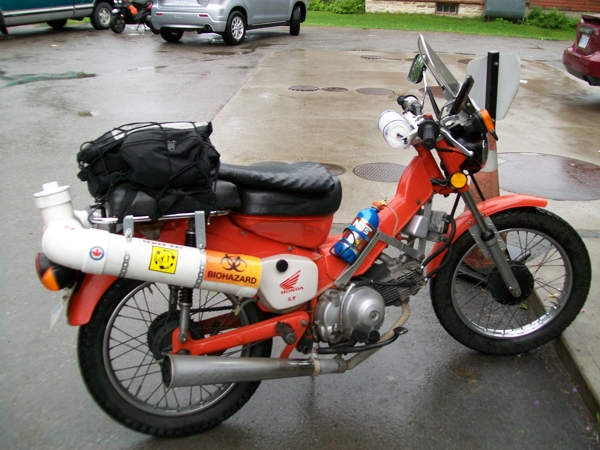 The main route is about 600 km. That’s nothing to be sneezed at, since most scooter manufacturers don’t mention horsepower specs for a good reason: there ain’t much. For those competing on a 50 cc scooter with a to-the-stops performance limit of about 60-70 km/h, attempting the bonus loop of 150 km required a serious degree of madness. Even on the 175 cc KYMCO, I didn’t feel I had the time or energy to put in what was needed to get the extra points. Those who did give it a go were further driven mad by a difficult-to-spot route marker that caused many to overshoot a critical turn by several kms before realizing what had transpired.

In the end, I managed to finish in 56th position at 7:52 pm with an odometer reading of 647.8 kilometers. I blame my lowly standing on both total lack of madness in costume and unwillingness to capture my nude self in digital form. 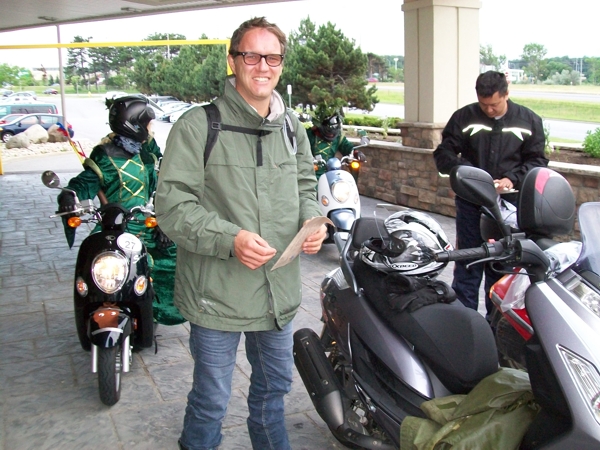 At the finish line some 14 hours later, your author looks no worse for the wear.  Straitjacket class next year Hobie?

In order to receive the coveted Certificate of Madness, you must reach the finish line. The key to my daylight return time was hooking up with Steve, a local and a navigational wizard, after I got lost twice somewhere around the Haliburton Sculpture Forest (a scavenger hunt stop). While I enjoyed the rally sights, Steve unerringly led us back to Barrie. An increasingly large group of opportunistic rallyists, noticing my good fortune in finding a human GPS, tagged along.

At the finish, odometers and receipts were checked by rally organizers to verify that competitors had indeed followed the route. Once confirmed, we were ushered up to rally headquarters for a welcoming Mill Street beer and an upload of mad photos before heading off to the hotel bar for some bench racing. Fourteen riders didn’t finish due to mechanical or time-out issues, but a shout-out must go to James Ringer who was the last entrant to make the cut at 23 hours, 30 minutes. Straitjacket class. Truly mad.

The morning-after celebratory lunch was rightly scheduled for a noon start allowing all a good night’s sleep. Rally master Harris entertained the bleary competitors with a narrated slide show of the best mad photos before presenting overall and class awards.

Madness has a heart. Rally winner Percy Adler donated his KYMCO scooter first place prize right back to the rally organization to raffle off in support of the Kids Help Phone, the official rally charity, to add to the $15,000 already raised by the competitors.

You’ve got to hand it to each of the competitors. A big sense of humor, tough as nails, and a generous spirit. Motorcyclists should take note and include scooter riders in the wave — especially if they happen to resemble the Super Mario Brothers. 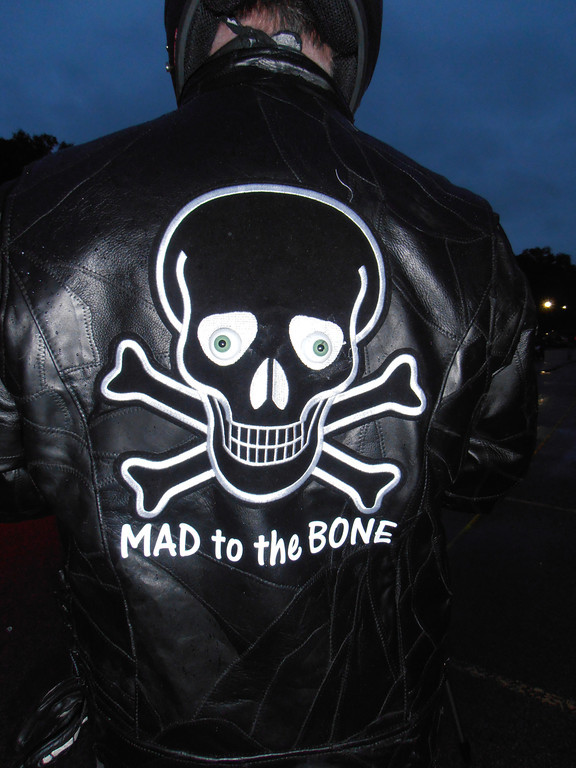