McCormick To Start 13th on Sunday!

Brett McCormick will start from 13th on the grid, the pole spot on row four, for tomorrow’s pair of races in round three of the eni Superbike World Championship at the TT Circuit Assen in the Netherlands. The Saskatoon-born rider was as high as eighth on the rankings early in SuperPole action, but a change in conditions caught the Effenbert Liberty Racing Team crew by surprise and they didn’t get McCormick out in time to benefit from a soft rear tire near the end of the opening session.

In damp and treacherous conditions early in the opening SuperPole period, McCormick was among the front runners, a strong effort given that Assen is just his second World Superbike event, and today was his first attempt at the top-16 only SuperPole.

As the track dried, some competitors went out on softer slick Pirelli rubber, and the change caught out McCormick and crew, dropping them down to 13th and out of the following session. Even so, 13th on the 23 bike strong grid in his debut at the famous TT venue is still a solid initial outing and promises much for tomorrow’s pair of 22 lap World series roods.

“We were solid early, but we thought conditions would get worse,” explained McCormick, somewhat beaten up after a crash in the wet early morning qualifying session. “We were waiting, and we know now that we should have gone back out, no matter what.

“We learned something from that, we could have been in the top eight, we were solidly there at one point,” che continued. An initial run in the top eight would have moved McCormick on to the final SuperPole session with the top series regulars.

“We were really good in those early, sketchy conditions,” continued McCormick. “When we first went out, it was wet in spots, there were some patches of water, it wasn’t too bad but you really had to be careful. I got going quick, and I thought the conditions would be best in the early going. Then everybody pitted, waited and went out on a qualifying tire. We had a qualifying tire ready,” confirmed McCormick. “We were waiting, I thought maybe we would get out, but that didn’t happen. I didn’t get a chance on the Q tire.

“I’m happy, this was a good effort, but it could have been better, for sure in the top ten. We should have gone back out, we made a rookie mistake together, and we’ll learn from that. We’re learning all the time. Now I’m close enough to the front, I’m getting up with the fast guys.” 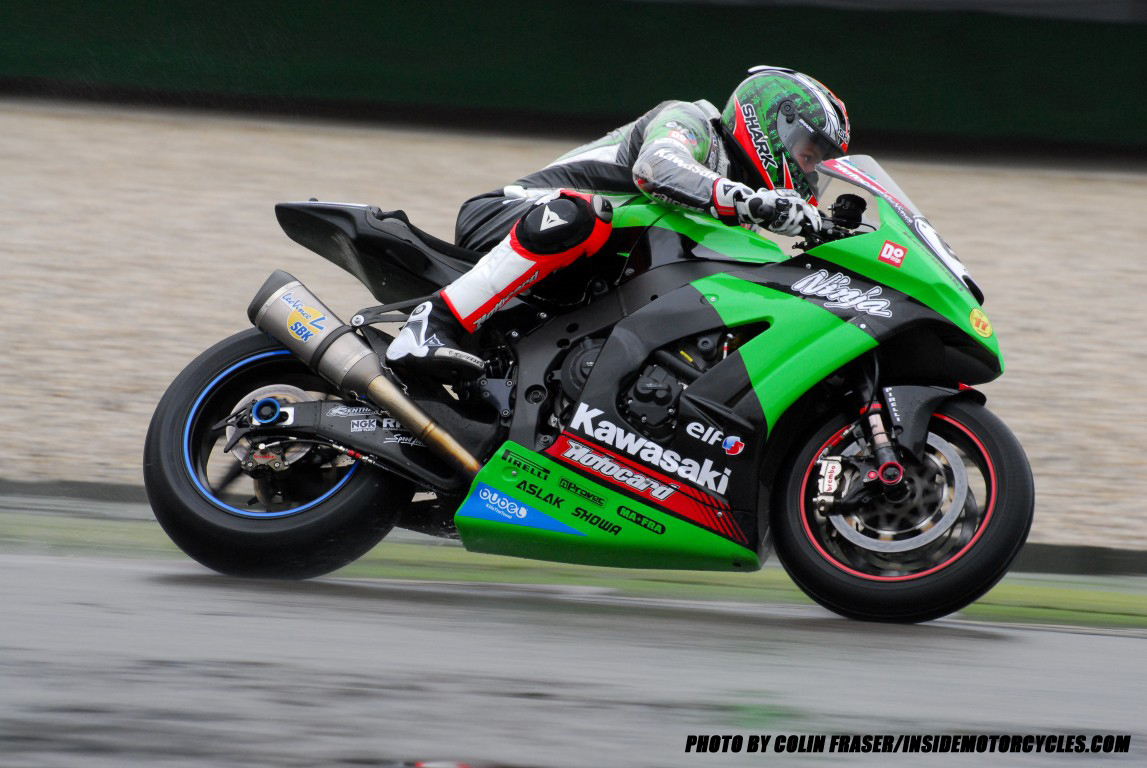 McCormick is open-minded about tomorrow’s races, saying that, “I only have twenty laps of running in the dry the way the weather has worked out, so I’m OK if it rains tomorrow. On the other hand, I’ like to race in the dry, because then there is less chance that I would crash and land on my side again!” After cracking that joke about his earlier tumble, McCormick confirmed that although he was sore, his injury did not affect his performance while on his Ducati 1098R.

“I think I can do OK in the dry,” he admitted. “I’m running with those mid-pack guys, and I’m close enough with my lap times that I can be right there. So wet or dry, I’ll be happy, and we are ready to battle.”

Following SuperPole, McCormick headed back to the racer’s clinic in the paddock for ice treatment for his hip and a leg massage. McCormick also thanked his personal sponsors: Parts Canada, Alpinestars, Shoei, Purolator and JET labels. 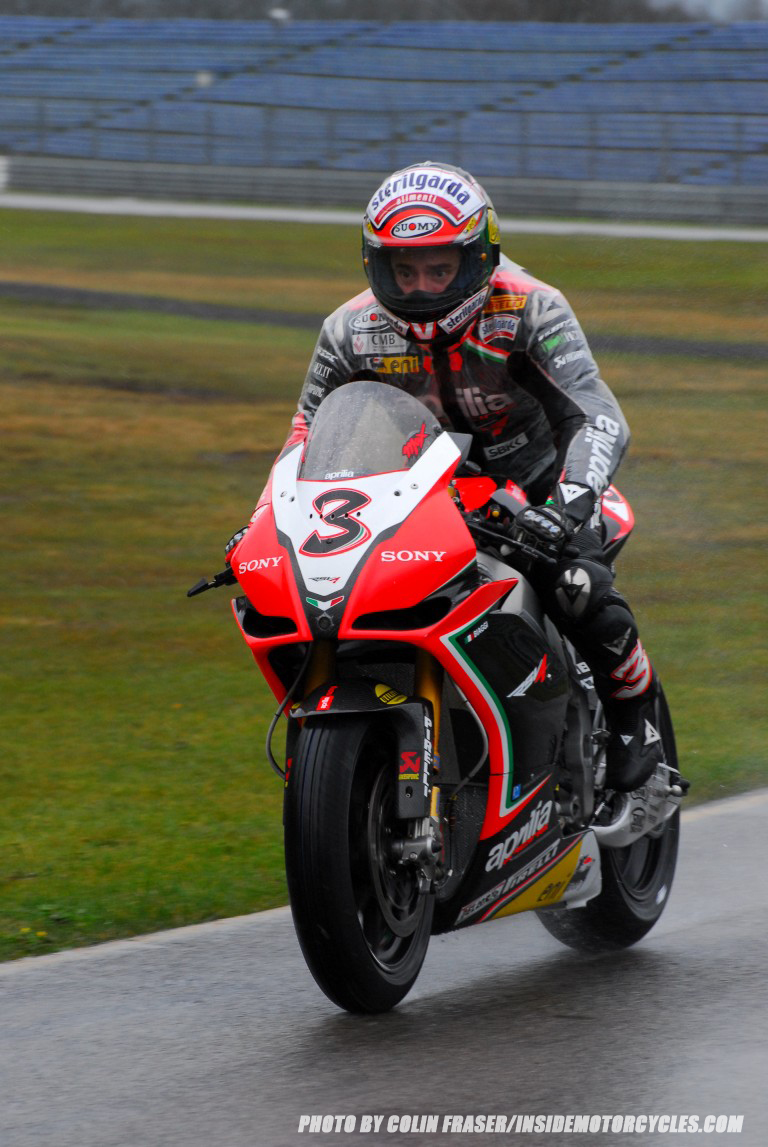 Fastest in the hairball Tissot SuperPole sessions was Kawasaki ZX-10R Ninja pilot Tom Sykes (pictured, above), who has typically set the practice and qualifying pace so far this season. Sykes will start from pole with a lap at 1:35.39, followed by hard charging Honda CBR1000RR Fireblade mounted Johnny Rea at 1:36.4. Jakub Smrz, McCormick’s Ducati team-mate, is third at 1:36.5 and yet another Liberty Racing Team Effenbert Ducati completes the front row, Sylvain Guintoli turning a best of 1:36.8. McCormick 13th best time was a lap at 1:41.9 on a drying track. Perennial frontrunner and former champ Max Biaggi (pictured, right) qualified 17th and did not make the Superpole qualifier.