by Greg MacPherson
in News
0

Canadian Brett MccCormick is Ready for his World Superbike Debut

Twenty year old Brett McCormick had a productive morning warm up session aboard the Effenbert Liberty Ducati in preparation for this afternoon’s pair of 21 lap feature races in round two of the 2012 Eni Superbike Championship at Imola, Italy.

During the short session in cool and still somewhat foggy conditions, McCormick was busy bedding in brake parts as well as trying out some adjustments to the Ohlins forks on his Ducati 1098R.  Other than a brief off-track trip through the paved run off area in front of the rabid fans at the famed Curva Acque Minerali, everything went according to plan.

At the end of the session, Saskatoon, Saskatchewan’s McCormick was ranked 22nd quickest out of the 25 riders who took part in the session.  This afternoon’s two races will take place under the threat of sporadic thunder showers, and McCormick will start his series debut race from row six in the international field. 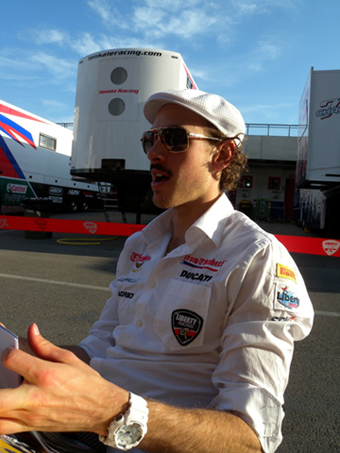 Over Saturday evening, McCormick’s crew performed extensive regularly scheduled service to the Desmo twin Ducati, as well as repairing slight crash damage suffered in the cool-off lap of the last run of the day.

“It was a minor thing, I slowed down but then picked up the pace to follow someone, and just had a little mental lapse, put a wheel off the edge on the cool-off,” smiled McCormick.  “I’m OK, my back is a bit sore, and the bike was just a bit rough cosmetically, and I bent a clip-on handle bar.”

While eating dinner in the team’s hospitality area mid-evening, McCormick was summoned back to the team’s pit box to confer on updates to his Ducati in preparation for today’s busy afternoon of racing.

“Yeah, we are still putting our heads together, but I’m really happy with the efforts, everyone is making me comfortable and we’re moving ahead with the set-up, understanding the bike,” continued the 2011 Canadian Superbike Championship title winner.

“I’m trying to get the bike to finish the turns better, and I’m working on my braking technique, the data shows I am not doing everything I could do on the brakes,” stated McCormick.  “I’m really happy with the way I’m riding overall, given that this is my first race weekend this season, and I’ve ridden maybe 200 kilometers so far this year!”

“The series is really competitive, I’m realistic about the challenges coming up,” confirms McCormick of his pending World Championship debut.  “I know what I’m getting myself in to, but it’s all good so far.”

Fastest in the morning warm-up was Kawasaki team leader Tom Sykes, the pole sitter continuing to set the pace aboard the works Ninja ZX-10R.  Sykes is known for his prowess in slippery conditions, so this afternoon at Imola could suit his style.

Second best in the warm-up belonged to the factory BMW S1000 RR of Leon Haslam, confirming the improving pace of that machine.  World Champ Carlos Checa was third best aboard the Althea Ducati 1098R, McCormick’s teammate and roommate Jakub Smrz was next up on the first of the four Team Effenbert Liberty Racing Ducati’s entered.