McCormick Continues To Improve in His Debut

Saskatoon, Saskatchewan’s Brett McCormick will start form the 22nd position on the grid in his series debut at tomorrow’s second round of the 2012 Eni Superbike World Championship series at Autodromo Enzo e Dino Ferrari di Imola inImola, Italy.  In today’s early morning final qualifying session, The Effenbert Liberty Racing Team Ducati 1098R rider improved  by almost a second and a half over his best previous lap time, turning in a quickest tour at 1:50.266.

The reigning Canadian Superbike champ was pleased with his effort, acknowledging that he is now close in terms of lap times with a large group of mid-pack series regulars.  Given that this morning marked his third-ever session with the full-blown Ducati Superbike, as well as the famous Imola track, his performance marked another solid step forward for the 20 year old.

“We opted for a little softer tire today, and that was probably good for half a second in terms of performance,” explained McCormick mid-morning under the strong Italian sunshine.  “I found the other second with my riding, just steady improvements, getting use to everything.”

McCormick admitted that with a new track, new bike and new series to learn, “we haven’t been too worried about the setup – we have good data from my teammates, and we’re more focused on getting settled.  We have a few little issues with the bike, maybe geometry, and I think we will make some more changes before our last practice session.  But everything so far is positive, and not too much in the way of drama.” 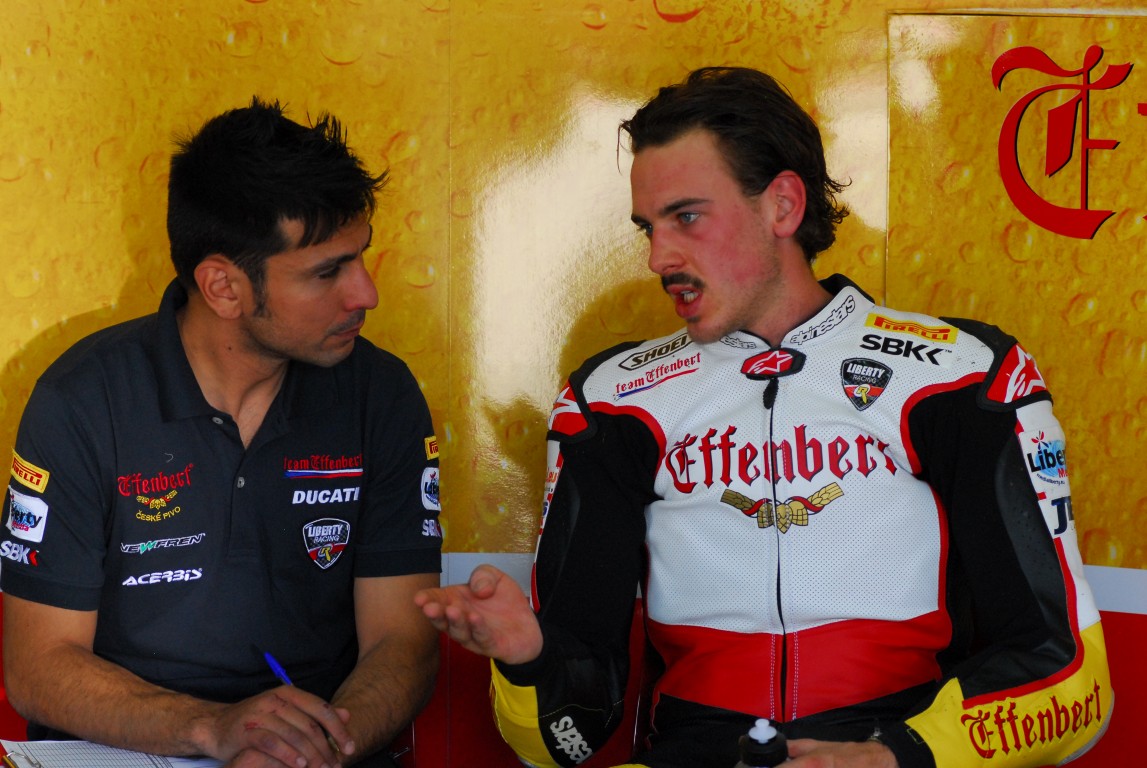 “We qualified in front of Aoyama (Honda works rider Hiroshi Aoyama, also making his Imola debut) and I was right with Hopkins (factory Suzuki rider John Hopkins of the US) in that last session, so those are all good signs,” continued McCormick.

“I was working with my engineer and our suspension guy through the session, and afterwards we go over the data, and then we come up with some solutions together.  Obviously, with three strong teammates, there is an opportunity to look at that data too, and that allows us to move forward faster.” 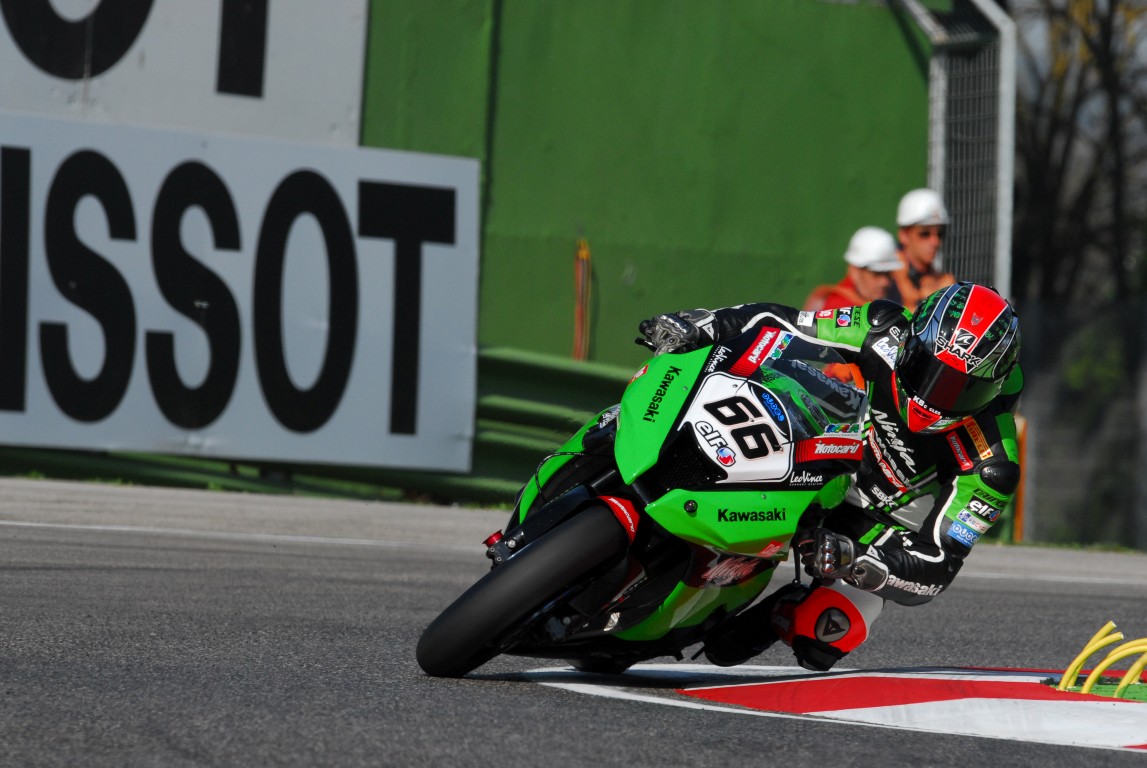 McCormick’s 22nd best Qualifying time means he will not take part in this afternoon’s SuperPole session, limited to the quickest 16 from the first two official qualifying sessions.  Heading into this afternoon’s grid-setting SuperPole three part program,  Kawasaki ZX-10R Ninja mounted Tom Sykes (left) is quickest at 1:47.458. Sykes earned pole for the season opening round at Phillip Island in Australia, an event McCormick attended as a spectator. 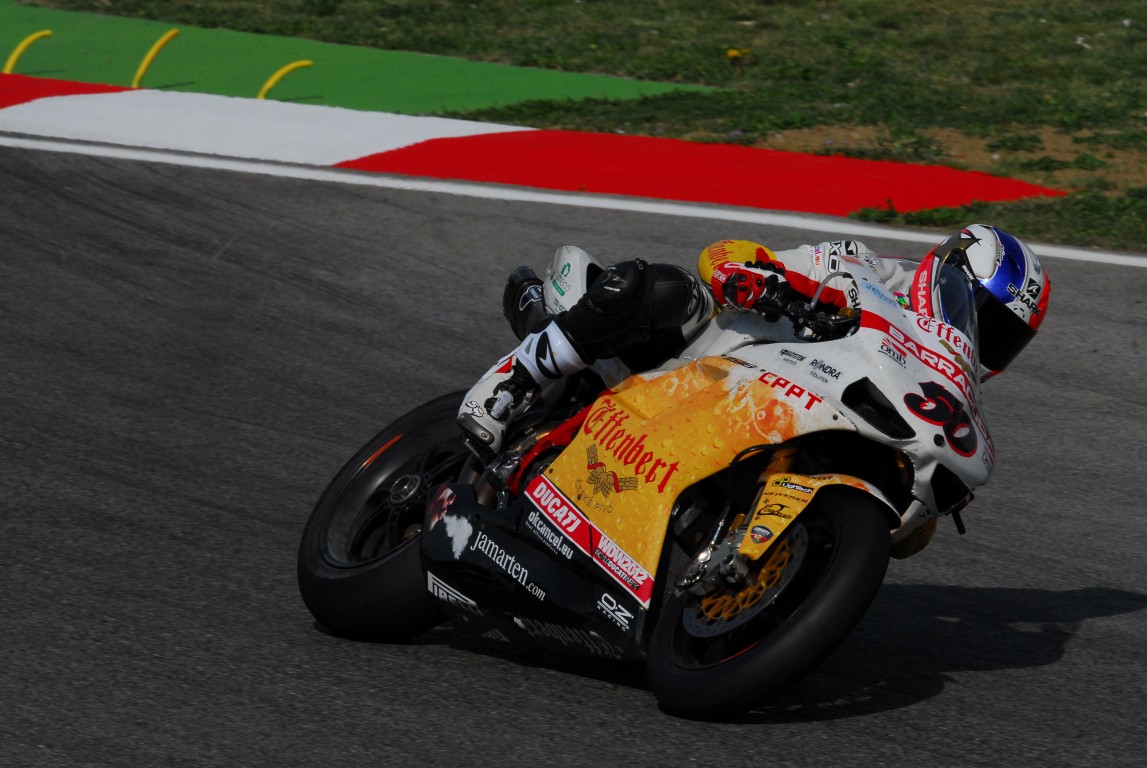 McCormick has one more practice session before the first of two Superbike races tomorrow.

Sykes on Pole at Imola, WSBK

Sykes on Pole at Imola, WSBK