Looking Back- Reflecting on Brett McCormick

Brett McCormick has hit the big leagues. “The Kid” from Saskatchewan makes his World Superbike debut this weekend in Imola, Italy with the Effenbert Liberty Ducati Racing team. As we lead up to what McCormick claimed is a “dream come true” this weekend, it’s hard to believe how far the young phenom has come in such a short period of time.

I’ll never forget the first time I met Brett. It was during the summer of 2006, when the 15-year old from Saskatoon, fresh from the Alberta Mini Roadracing Association (AMRA) circuit, showed up at Shannonville with a Yamaha R6 with “Your Logo Here” emblazoned on the side of the bike.  His plan was to compete in the Amateur 600 Sport Bike championship and, like most racers at the time, was doing anything he could to scrape together a few extra sponsorship dollars to compete in the full national series.  Rumours around the paddock were that Brett, who showed off his prowess in mini racing, was going to be a force to be reckoned with. The rumours were true; the kid was fast. Damn fast.

My second memory of Brett came that same year during a CSBK Amateur Sport Bike race at Mosport in which both Brett and I were entered. Only in my first full season of road racing (and without 4 years of mini road racing under my belt), I knew I was no match for the kid from Saskatchewan. My goal was merely to stay out his way when—not if, but when—I got lapped. I recall instructing my crew to give me a signal when Brett was close, in order that I might stay out of his way and the anticipated battle for the lead. We weren’t seven laps into the race when Brett came screaming past me on turn nine of the 3.97km racetrack. When I came through the front straightaway, my crew merely held their arms out in disbelief, as if to tell me, “Hey, we didn’t see him coming that quickly either!”  I continued riding my race, anticipating that the second place rider would be along anytime now. Turn one. Turn two, three, four…..it was not until turn five, almost halfway around the racetrack, that the second place rider caught up to me. Brett held that much of a lead over the rest of the field. There was no question in my mind that this kid was a little bit superhuman. 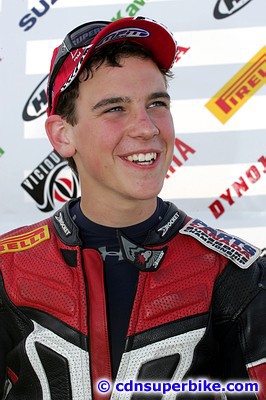 Brett very quickly started winning Amateur Sport Bike races and shattering lap records on the competitive Canadian circuit. In fact, in 2006 he would go on to score three race wins, four pole positions and four lap records in Amateur Sport Bike (he also scored a win, pole position and lap record in the Canadian Thunder class). If memory serves correct, he would have handily won the Amateur Sport Bike title in 2006 if it weren’t for a post-race mishap where his motorcycle ran out of fuel on the dyno and he was disqualified. The disqualification would eventually mean teenage ice racing sensation Karl Daigle would take the title, but not without controversy and outrage from fans that thought “The Kid” from Saskatchewan deserved the title. Rules are rules, and Brett finished 4th overall in the Amateur Sport Bike class that year, earning Cherrypicker Racing’s Top Rider of the Year for the Parts Canada Superbike series and enough points to earn his pro license in 2007.

McCormick’s skills did not go unnoticed, and he was quickly signed to race for the Canadian Kawasaki Factory road racing team for 2007 alongside mutli-time Canadian champion Jordan Szoke.  According to Canadian Kawasaki team manager at the time, Jeff Comello,  “Brett is perhaps the most exciting up and comer our series has seen in recent years.” In a team press release, Comello went on to say, “Even though Brett is young, he showed maturity both on and off the track in his first National tour last season. We see him as a star of the future and we think the Kawasaki team is the right place for him to develop his potential.”

2007 was also the same year that I started my relationship racing with Kawasaki and I was fortunate to spend time with Brett in the Kawasaki booth at some of the motorcycle show events. A fond memory of the shows was that Brett’s mom would send an entire suitcase of cookies and baked goods for Brett and his dad and the rest of the Kawasaki crew to enjoy over the long show weekends. The trend continued into the summer, with mom’s home baked goods around the paddock all season long. There was no question that Brett’s efforts were supported strongly by his parents.

Brett would go on to win HJC Pro Rookie of the Year and finish 5th overall in the Parts Canada Superbike and Pro 600 Sport Bike classes in 2007. In 2008, still with Kawasaki, Brett had two Superpole wins and his first Superbike race win under his belt.  From my perspective, he took the two years with Kawasaki to learn and further hone his skills.  What better a place for a teenager to learn than from a multi-time Canadian Superbike champion (Szoke) and his award-winning team. Guys like Mike Crompton, Harald Surian and Richard Winter don’t fool around, and if you spend time under their tent, you listen and learn.  Brett did exactly that.

By 2009, Brett had learned what he could from Kawasaki and moved to the Team Suzuki Blackfoot Picotte racing squad as the team’s sole rider.  He finished 2nd overall in the Canadian Superbike Championship with five Superpole wins, four Superbike wins and six Superbike lap records. Only the defending champion (and Brett’s former teammate) Szoke was able to fend him off. 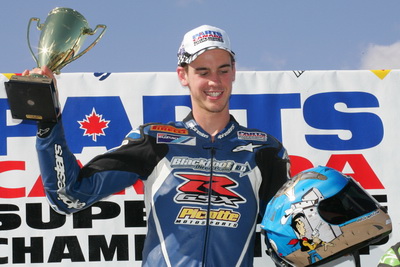 Then Brett did exactly what every young, talented Canadian rider must do if they wish to further their career: he got out of Canada.

Even though he didn’t win the championship in ‘09, finishing 2nd was enough for Brett to prove that he had what it took to compete in the AMA Superbike series for 2010. At 19 years old, Brett was heading south to compete in the US with the Jordan Suzuki squad — not an easy thing to do for any teenager.  Brett turned some heads in the AMA with some top ten finishes, and made some mistakes along the way too, the most controversial being a final lap incident at Barber Motorsports Park where an attempted pass on competitor Eric Bostrom resulted in a crash that sent Bostrom to the hospital with a severe laceration to his leg.  “It was my fault,” McCormick immediately admitted, showing maturity again at young age.

Brett returned to Canada in 2011 to compete in the Parts Canada Superbike series and, as you know, won his first Pro Superbike title with the RadX BMW Motorrad team.  Now in 2012, just six short years after “The Kid” from Saskatchewan showed up with that “Your Logo Here” Yamaha R6, Brett’s efforts, hard work and determination have paid off as he prepares to grid up for his very first FIM World Superbike race in Imola this weekend.

Brett’s work ethic and career development strategy should be a lesson to all young Canadian racers. Brett proves that opportunities come with hard work and with the ability to take risks.  It’s not always easy for a teenager to leave their hometown friends behind for the summer to pursue a hectic schedule across Canada; it’s even scarier to hop on an airplane bound for Europe just after high school to live in a country where you don’t speak the language, you don’t understand the culture, and you’re not particularly fond of the coffee.

Ten years from now, Brett will have experienced the world like most never will; he’ll be used to different languages and cultures and he might even gain an appreciation for the coffee. One thing is for sure, he’s going to have a wild ride and the opportunities will be tremendous. Brett’s success should be something that all young Canadian riders look up to, and he should be proud.  I wish him all the best on his new adventure.

I wonder if his mom’s still shipping those cookies and baked goods to Italy?