Brett McCormick during a Friday practice session at Nürburgring

Saskatchewan’s Brett McCormick is more than ready to resume his rookie season with the Liberty Racing Team Effenbert Ducati squad this weekend at the fabled Nürburgring cirucuit in Germany.  Out of action since round three at Assen where he sustained serious injuries to his neck and hand, McCormick is fully fit and set for a solid return to action.

“I last rode my Blackfoot dirt bike on Monday, and I guess I’ve motocrossed in six of the last nine days that I was at home,” explained McCormick from the paddock area for the upcoming eni Superbike World Championship round.  “My neck is now as good as it can be, everything is great.  I stopped going to physio two weeks ago, and I happy with my strength.  Now I just have to get back to road racing!”

McCormick tested for his team at the Silverstone SBK round a month ago, where bad weather mostly kept him off the bike.  Now certified fit and approved to return to action, McCormick thinks the Nürburgringshould be a good venue for his set-up.

“The track looks great, it shouldn’t be too hard to learn, and I think it suits me and the bike.  There are only a couple of longish straights, and it’s the kind of layout that suits the Ducati.  I totally like the flow of the track, and it’s cool to be next door to one of the most famous track in the world.”

The “new” Nürburgring is directly adjacent to the famous 14-mile sister course that shares the same name.  From the Superbike paddock team members can watch a variety of hot four-wheelers attacking the 80 year old “green hell” during the infamous public lapping sessions.

McCormick got a treat when he arrived at the course yesterday, as helmet painter Petr Simak of Slimgrafix had delivered two new designs based on McCormick’s popular maple leaf motif.  One is primarily white, the other flat black, and both contain detailing reflective of McCormick’s interest, especially ice hockey. 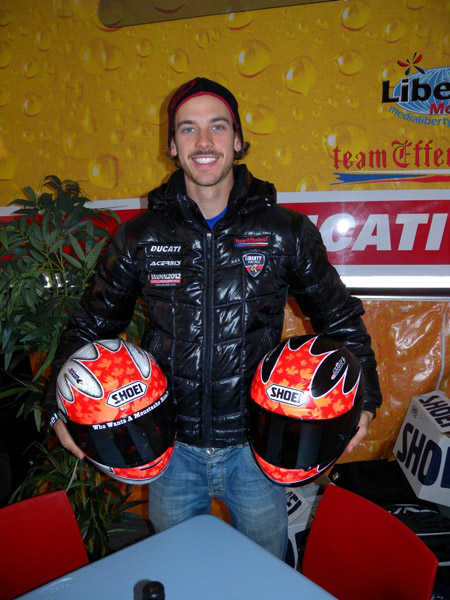 “I met Petr over the winter, he’s from Prague in the Czech Republic and he is into hockey, motocross, things I like too.  He’s a good buy, fun to hang out with.  We actually watched an AMA Supercross round at his friend’s bar, so I could get my racing fix when I first got to Europe.

McCormick takes to the Nürburgring’s 14-turn, hilly 5.137 km layout for 45 at noon time, with first qualifying up at 3:30 PM local time.  Organizers expect a good turn out with popular local manufacturer BMW now leading the series standings for the first time, Marco Melandri ahead in points with a total of 308.5 on the S1000RR, followed by Max Biaggi’s Aprilia at 290 and the Kawasaki entry of Tom Sykes with 265.5 points.  Six races remain in the series, and all three of these riders have a serious shot at the 2012 Superbike World Championship title.

Keep an eye on Inside Motorcycles all weekend long for exclusive coverage of Brett McCormick’s return to World Superbike action.