Grand Bend, Ontario- Story and photos by Graeme Jones: 2012 marked the 9th anniversary of the Kevin Blackmore Memorial Quick 16 race at Grand Bend Motorplex in Grand Bend, Ontario. The annual drag race, held to commemorate the life of longtime Ontario dragbike racer Kevin Blackmore, was started in 2003 and routinely draws the most talented motorcycle bracket racers that the province has to offer, as well as racers from over the border in Michigan.

This year’s race, held on Saturday, June 16, had a huge void as the local dragbike community lost another racer and friend earlier this year. Jack Learment passed away in April after a relatively quiet battle with cancer. Jack, along with good friend and fellow racer Brad Prong, were the key organizers and fundraisers of the annual Blackmore memorial race. It was a sobering experience, as for many of us it was the first time we’d seen each other since we heard the news (Jack didn’t have a funeral or visitation). But his presence was powerful at the race, and a memorial was held in his honour. Prong and Geoff Pollard, another very close friend of Jack’s, pushed his Kawasaki KZ Mark II down the quarter mile in a parade lap while we all stood with heavy hearts (and a few tears) in the staging lanes. Jack’s wife Beth was later presented with a photo collage signed by a ‘who’s who’ of racers and friends, a bit of a thank you for allowing Jack to be a part of our lives at the track for so many years. 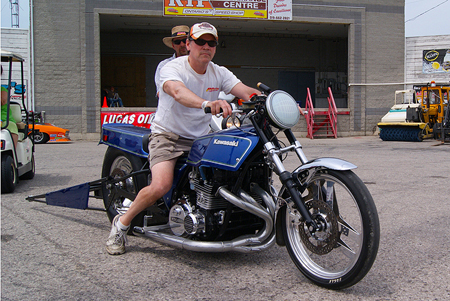 On the track, the cream of the crop again showed up, as they do every year for the Kevin Blackmore Memorial Quick 16. Dan Cryderman qualified number one at 8.21/156, followed by multi-time event winner Mike Konopacki in second (8.47/150), Josie Brooks in third, Bob McDonald in fourth and Paul Crane, on the ex-Blackmore bike owned by Prong, rounding out the top five at 8.61/148. A full field of 16 bikes was qualified heading into eliminations. 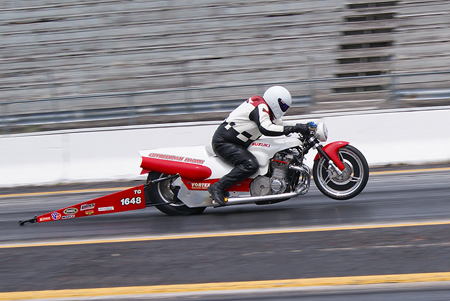 In the first round, three races were decided by redlight starts, while two more were uncontested bye runs on account of parts breakage. The winners of those races were fine with that, especially since the quarter-final was already a money round thanks to the funds raised for the payouts! That second round saw two more redlight starts, turning on the win light for #7 qualifier Ted Glinny and #13 qualifier Glen Rock. Lyle Elliott of Woodstock strapped a holeshot on Josie to take his ultra cool Kawi Z1 to the semis, while Konopacki got an easy win over #6 qualifier Marty Kuiack.

In the semifinal round, Glinny had a case of ‘live by the sword, die by the sword’ when he lit the red bulb just one round after winning on an opponent’s redlight. Rock’s Hayabusa was marching on to the final round. There he would square off with Konopacki, Canada’s most prolific motorcycle bracket racer, who beat Elliott by .030 seconds at the finish line in the other semi. In the finals, it was all Kono as Rock had a very uncharacteristic .150 light. That was all that Konopacki needed to take an easy win, slowing on his trusted Kawasaki Super Comp/Pro ET bike to an 8.63/132 on an 8.52 dial. Rock went 9.84/143 on a 9.79 dial in a losing effort. 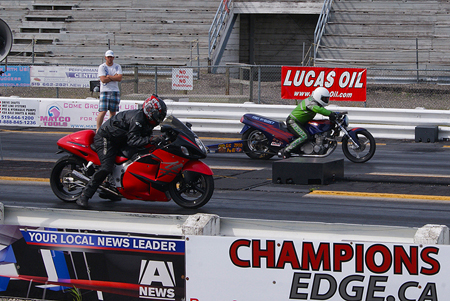 To say that Konopacki has dominated the Kevin Blackmore Memorial Quick 16 would be a gross understatement. In the nine years this race has been contested, Konopacki has now won six times. But this one was for Jack.

A special thanks goes out to the following for donating their funds to the purse: Grand Bend Motorplex, Jack’s wife Beth and sister Fran, Sarnia Drywall Supply and Brad Prong.