The top three on the podium. From L to R: (L to R) Ayrton Badovini, Loris Baz and Michel Fabrizio.

First-year Superbike rider Loris Baz of France ran a great last lap to take first for Kawasaki in the opening race of the eni Superbike World Championship at Silverstone in the U.K. on August 5. In a race with ever-changing track conditions, including drizzle but no really hard rain, Baz stuck with the leaders throughout and then out-fumbled his opposition on the last of 18 laps.

The former British SBK series regular, in his fifth event onboard the factory Kawasaki ZX-10R Ninja, managed to take the lead with just three turns to go as five riders disputed the lead, none sure of the traction available to their slick Pirelli rubber. Baz is filling in for the injured Joan Lascorz, who suffered serious back injures while testing early in the season. 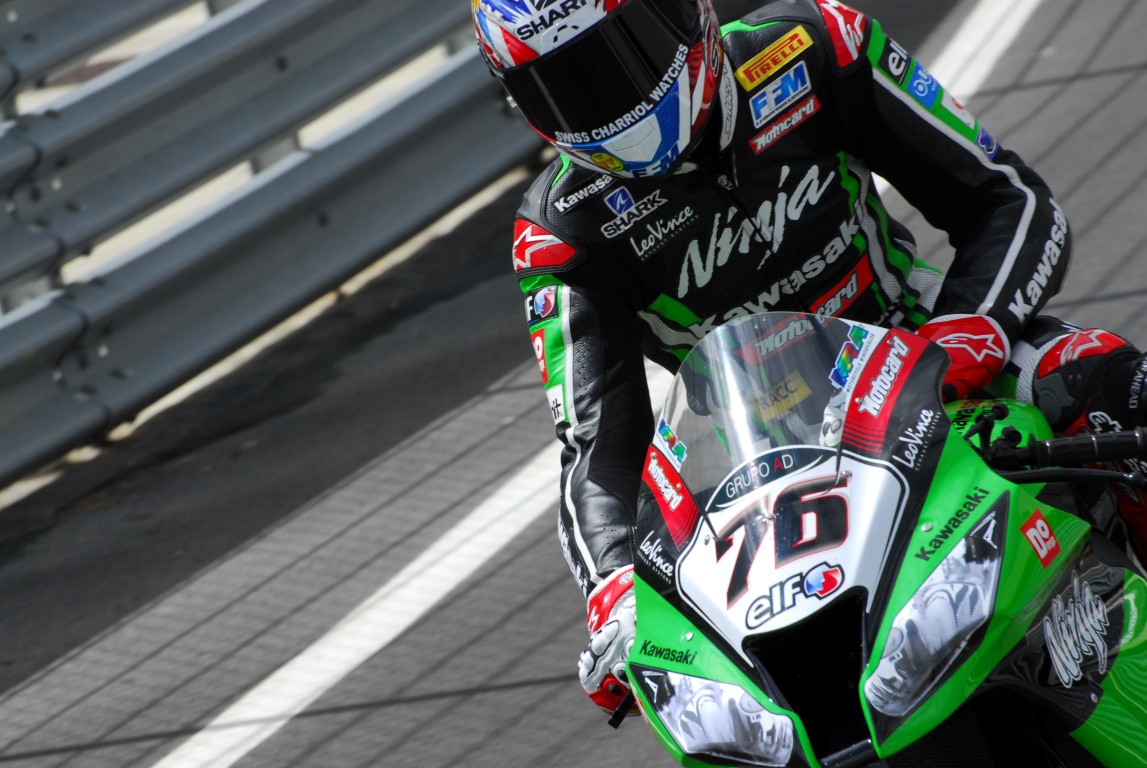 In a frantic run to the finish line out of the final chicane, Baz took control while the BMW Motorrad Italia GoldBet pair of Michel Fabrizio and Ayrton Badovini out-dueled the Honda of crowd hero Jonathan Rea. As this trio crossed the finish line, Rea collided with Badovini, both tumbling to the tarmac and sliding along the front straight at well over 160 kph. Both riders were unhurt, Fabrizio netting second from Badovini and Rea.

Top title contender was the Althea Ducati of Carlos Checa, who lead eight laps in the middle of the race but slowed as the drizzle intensified, dropping back as far as seventh. As Checa faded, the works BMW Motorrad entry of Leon Haslam took the point, and looked set for the win.

Then, the track started to dry again; thunder was replaced by sunshine, and the top seven runners quickly moved past Haslam. Baz aggressively charged up into the lead after running amongst the leaders for most of the race. On the last lap, it looked as if any of seven riders could win, series lead Max Biaggi running wide on the last lap, getting sideways on the edge of the circuit and tumbling from the works Aprilia.

Biaggi was lucky not to be injured, but suffered in the overall series point standings. Biaggi still leads with a total of 271.5 points, followed by Marco Melandri at 259.5, opening lap leader Tom Sykes with 220.5 points and Checa at 215.5. Melandri wound up seventh, just behind his works BMW team-mate Haslam, while Sykes netted a careful eighth. Melandri was as high as second in the early, dry running. The works FIXI Suzukis were expected to star after qualifying well, but Leon Camier crashed without injury and American John Hopkins had an electrical problem and retired.

The race was red flagged at the first start attempt, after light rain began to fall and several riders slid off. The most embarrassing incident involved the Liberty Racing Team Effenbert Ducatis of pole sitter Jakub Smrz and Maxime Berger. As the red flags came out, Berger fell and his bike slid into Smrz, taking him down too. Smrz’ crew could not get the Ducati fixed in time for the start and he wound up frustrated, out of the points in 17th.