BMW has now officially entered the scooter market with its two new maxi-scooters. Both the C600 Sport and C650 GT are built on the same platform, with the GT aimed at touring and our test unit, the C600 Sport, targeted for the sportier enthusiast.

BMW is arguably late in the scooter race, but forgive them — they’ve been busy innovating elsewhere with great success.

Our black C600 Sport is a long, big scooter. The front has minimalist bodywork that flows into a lean rear with an exposed shock and enclosed rear drive. It’s not a groundbreaking or overly futuristic design but a functional one, and to our eyes it’s a sassy-looking machine. 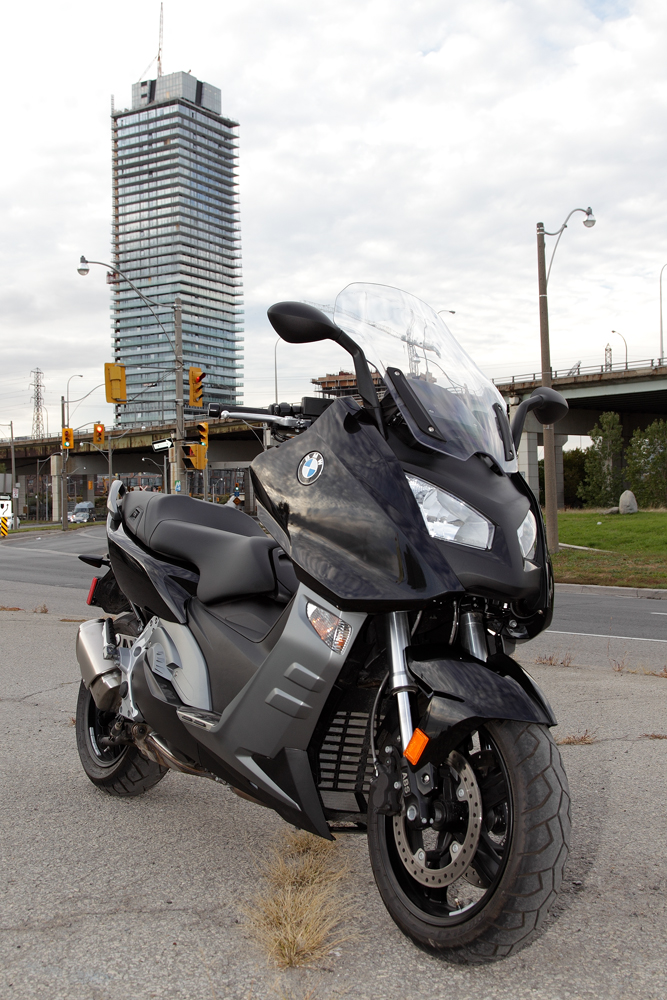 Walking around the sport you notice right away the two 270 mm front discs attached to a modern male-slider fork and a 270 mm disc in the back. Two-channel ABS is standard. The stock sticky Pirellis are mounted on lightweight 15-inch die cast alloy wheels. The cockpit is finished in a high-grade plastic, and all wires from the bars are enclosed and tidy. BMW has endowed the scooter with the latest instrumentation from its motorcycles, and it’s all intuitive and very easy to use.

The ergos are comfortable and there is considerable room to allow for a variety of butt sizes. The seat and reach to the bars allow the rider to move around easily. Instrumentation is positioned for quick reading. The front windscreen has three positions, adjusted with screw-in knobs and indentations. It’s never going to slip out, but it’s not all that easy to use.

BMW’s safety features can lead to some initial confusion. When the side stand is extended not only will the bike not start, but it locks the rear brake. This is handy when parking at your local coffee shop on a hill, but can lead to some embarrassment the first time you try to figure it out.

The scooter starts instantly, with a very quiet, nice rumble from the 90-degree crank with 270-degree ignition spacing. Before I twisted the grip I reminded myself it’s a continuously variable transmission (CVT) automatic, and the right lever is for the front brake, left lever is rear. The brakes are not linked. 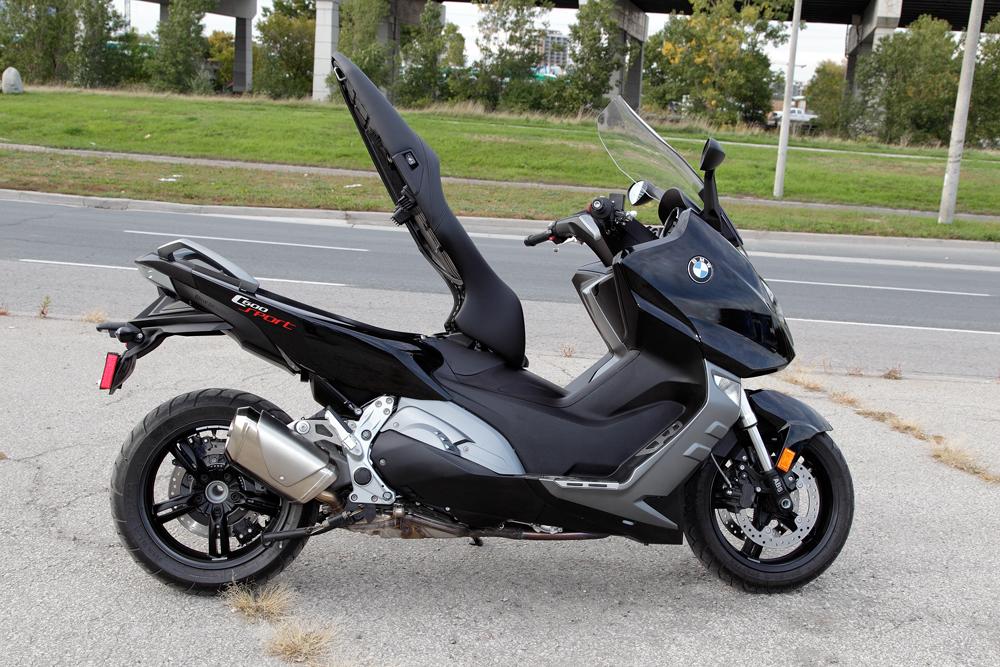 There is the typical slight CVT lag with throttle application before the bike gets rolling. This is not an issue however and within a few stoplights, I was a smooth operator. At 60 hp and over 500 lbs I was not expecting HP4 acceleration, but it was a pleasant surprise to trounce the Mustang eyeing me off the line (okay, so maybe this particular Stang was a six-cylinder). The acceleration belies the bike’s girth and I never felt short of jam. En

hancing the ride is the complete lack of engine vibration at any rpm.

I thought maybe this mega scoot was geared only for stoplight battle and would pay the penalty with a limited top speed. Surprise again — I took the scoot to a ‘closed course’ type location and got an indicated 170km/h, and BMW Canada assures us it will do a teeny bit more. Remember, this is a scooter! Highway travel is effortless, even two-up. 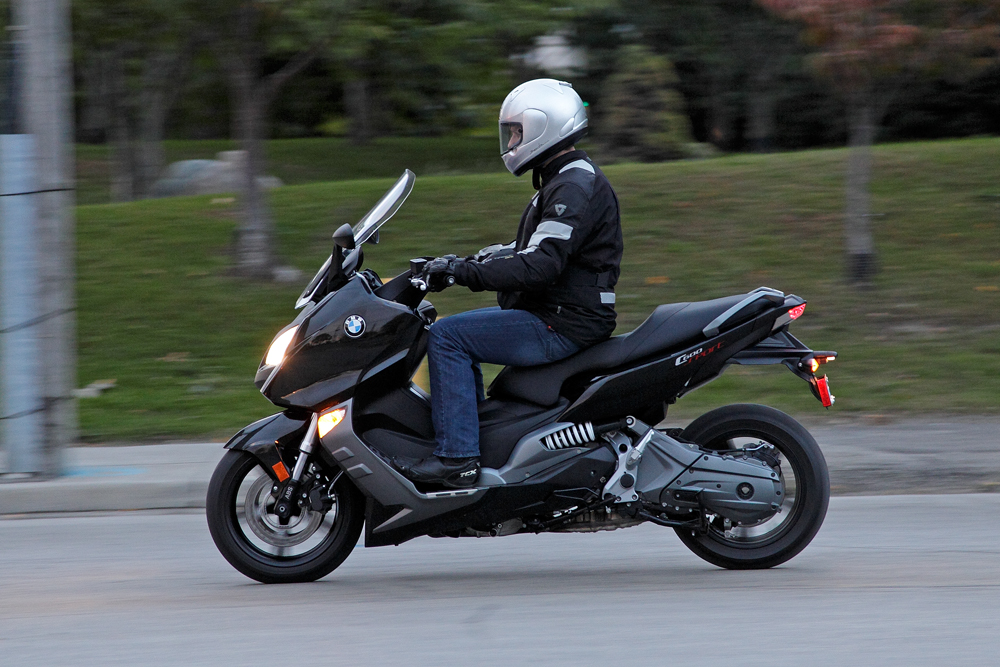 The engineers did good work getting the right pulley ratios for the transmission. BMW’s version is seamless and when the scooter is moving there is no lag between throttle application and get up and go. The CVT also has neutral off-throttle braking, which feels very much like a motorcycle.

On some of my favourite roads the C600 proved itself a super-stable platform that can carve corners with ease. Combining good suspension, sticky tires and a stiff chassis yields a proficient handler.

Performance within the city was brilliant. This big scooter’s high speed stability does not reduce its ability to crawl in and around the crowded city. The non-adjustable suspension as delivered performed well over a wide range of riding situations. Toronto pot holes, street car tracks and hard braking revealed no shortcomings. 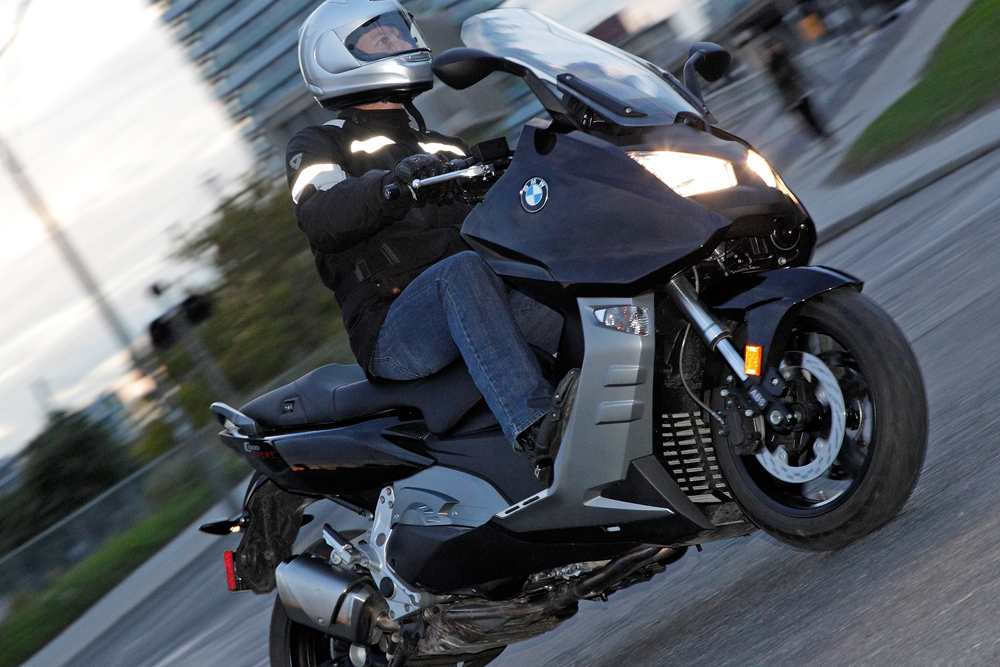 This scooter has serious stoppers, dare we say almost motorcycle-like. These aren’t Brembo monoblocs but they have good feel, don’t fade and the rear brake is easy to modulate. The brake’s ease of use is particularly useful in slow speed inner city stuff. BMW’s two-channel ABS works like a charm and this version kicks in with no drama.

While you’re in the city you can take advantage of some serious under-seat storage and two glove compartments for shopping. If it’s dark out don’t fret, the LED underseat lights will make sure you don’t squish the eggs. 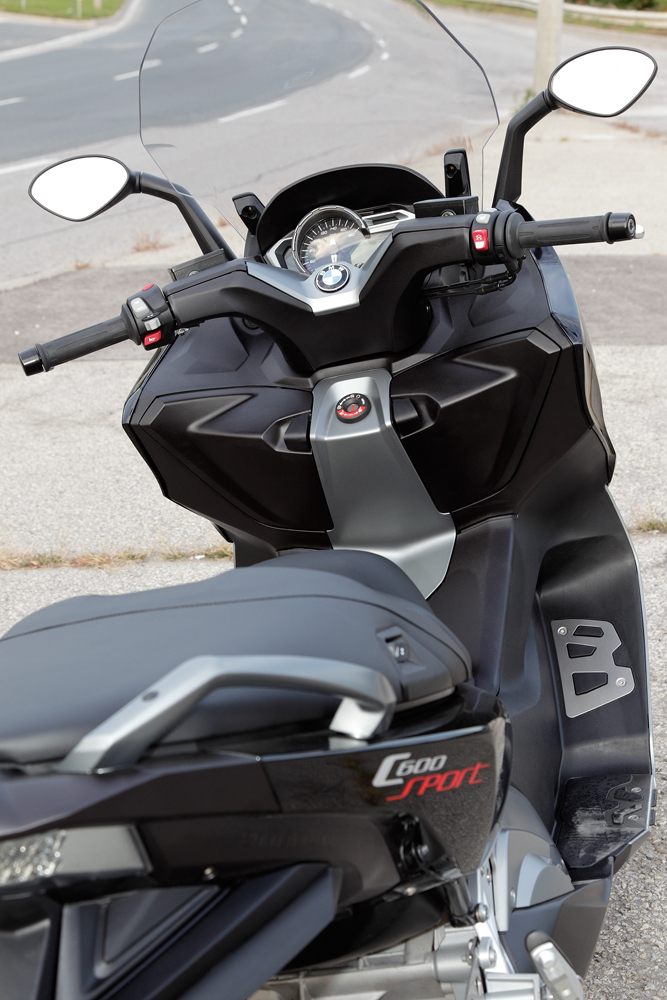 With an MSRP of $10,990, the C600 will most likely be purchased by existing scooter owners. We feel that it should also draw in the person who might no longer find a traditional motorcycle easy to use, but still yearns for motorcycle-like performance. What we have is a scooter able to traverse highways, thread its way through rush hour traffic and still allow you to wear your kilt!