Motorcyclists in every province should be as fortunate as British Columbia. Not only are there some dreamy motorcycle roads and scenic attractions, but riders on the left coast also have the BC Coalition of Motorcyclists on their side.

BCCOM is, according to its mission statement, “a broad-based organization that exists to promote, preserve and protect the interests of all motorcyclists in British Columbia.”  Started in 1985 by a group of concerned riders who felt they were being discriminated against simply due to their chosen mode of transportation, BCCOM has over the years been instrumental in the promotion of motorcycle safety, education and awareness in the province.

BCCOM represents approximately 6,000 members who are the backbone of the organization; the Coalition is entirely membership-funded. Its list of accomplishments includes:

Adele Tompkins is the Executive Director of BCCOM, and has been for the past 10 years after starting as a part-time secretary in 1989. A 23-year veteran of riding, she is passionate and focused, and holds the rights and safety of motorcyclists in BC close to her heart. She was also one of the founding members of the Motorcyclists Confederation of Canada (MCC).  Tompkins is proud to stand up for motorcyclists in the province, but like most Canadians, is all too humble and quickly deflects any praise. 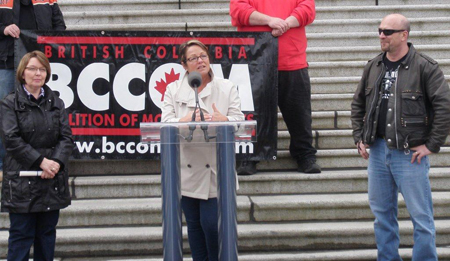 “Anything that has been accomplished by the Coalition is because of its membership and one of the original founders, our legal counsel Jim McNeney,” Tompkins immediately points out. “Jim has given his time and guidance, which is one of the fundamental reasons why BCCOM is what it is today.”

The Coalition is always at the forefront of the most pressing issues involving riders in the province; in recent months, these have included a lane filtering proposal and the new helmet law, among others.

“We are currently looking for input from motorcyclists in BC regarding a proposal from the Office of the Superintendent of Motor Vehicles and the Ministry of Justice,” says Tompkins. “Included in the proposal are changes to the Graduated Licensing program, learner power restrictions and rider training enhancements. We currently have a proposal before the government for ‘Lane Filtering’, and we’ve been recently asked by government to resend BCCOM’s ‘Transferable Plates’ proposal from 2004.”

BCCOM uses a combination of member input and legal counsel to confirm its position on each issue that arises.  For example, the group is currently seeking further opinion from its membership on the aforementioned topics of graduated licensing, power restrictions and rider training. (You can read more about these topics at www.bccom-bc.com.)

A new and fairly unpopular helmet law was introduced in the spring that outlaws ‘beanie’ helmets. Safety is paramount with BCCOM, but it has also taken a longstanding position of “freedom of choice” when it comes to helmets. “The stance of the Coalition is that training is the way to reduce deaths, not bringing in law after law to try to stem the problem,” Tompkins states. “That being said, it is now law in this province and after many years, BC has an enforceable standard.”

Ridership is significantly on the rise in BC — in 1996 there were 52,878 insured bikes on the road, but by 2011 that number had swollen to 98,000. There were 257,900 provincial motorcycle license holders in 2011. These growing statistics make an advocacy organization like BCCOM even more important. The Coalition liaises with government officials as well as regional and provincial motorcycle clubs and associations, all for the sake of promoting, preserving and protecting motorcycling in BC. 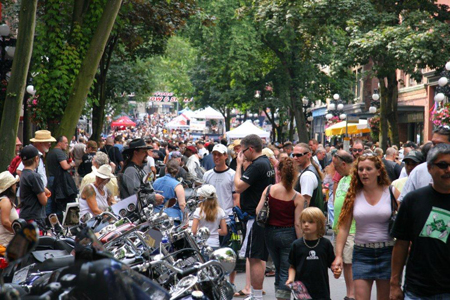 “Motorcyclists in this province feel under attack at the present time with new laws and regulations coming out fast and furious,” Tompkins says.  “While quick to enforce all sorts of laws on motorcyclists, very little has been done to try to keep them safe — such as adding a larger motorcycle component into vehicle drivers’ training, mandatory training or incentives, or the reinstatement of the Insurance Corporation of British Columbia’s (ICBC) advertising campaign to make car drivers aware that motorcycles are back on the road.

“Interestingly enough, ICBC stopped that campaign in 2003/2004, and deaths have risen steadily since.  ICBC’s own statistics show that in all motorcycle accidents involving another vehicle, 66% are the car driver’s fault — usually a left hand turn or coming off a side street. There was a Coroner Review Panel in 2008 to look into motorcycle deaths where some recommendations were made… (but) it is the feeling of motorcyclists that those recommendations have been turned into a ‘punish motorcyclists’ free-for-all.”

While rights and laws will always be a major focus of BCCOM, the group also enjoys the open road themselves by attending rides, rallies and as many events around the province as possible. The Coalition also organizes its own rallies including the MLA (Members of the Legislative Assembly) Ride, where, in Tompkins’ own words, “we ride to the legislature, have May proclaimed Motorcycle Awareness Month in BC, and then proceed to take MLA’s and staff on a ride so they too can experience the joy of riding.” The Central City Show N Shine is a free public event in Surrey that promotes motorcycling in a positive light to the general public, while the Vancouver Motorcycle Toy Run has supported kids and families for 33 years at Christmas in conjunction with the Lower Mainland Christmas Bureau.

BCCOM endorses, recognizes and supports all aspects of motorcycling, from street and touring to racing and off-road riding. Becoming a member comes with benefits including discounts at various bike shops, free legal counsel on bike-specific issues, discounts on optional insurance coverage with select insurers, and experienced representation from a group that has your best interests at heart. All provinces in this great country should be so lucky.

For more information on the BC Coalition of Motorcyclists, visit their site at www.bccom-bc.com.

Willie G. expected to be at Port Dover Friday the 13th

Willie G. expected to be at Port Dover Friday the 13th