by Greg MacPherson
in Industry News
0

Husqvarna has announced the introduction of a brand new Dual-Purpose platform to their 2013 line of motorcycles. The all-new TR 650 Terra and TR 650 Strada are unique and practical seven-day-a-week motorcycles that are capable of being both urban commuters and weekend trekkers. The asphalt-oriented Strada and its dirt-road counterpart – the Terra.

Aimed at both the on and off-road markets, with the new TR 650 Strada and the new TR 650 Terra, Husqvarna Motorcycles extends its program of highly agile, dynamic single-cylinder motorcycles by adding two attractive new machines Their slim, wiry stature and masculine, dynamic design gives the new Husqvarna TR 650 models a progressive, light and energetic look, whether as the “Terra” version for light terrain or as the “Strada” version for asphalt-based riding.

Powerful single-cylinder engine
The TR 650 Terra and Strada feature a 652cc single-cylinder DOHC motor, based on BMW’s venerable G 650 GS engine. A modified EFI system, redesigned cams, higher compression and revised piston and cylinder head increase the power output of the TR650, allowing it to boast 58 horsepower. The snappy response and high-revving TR650 engine also manages to offer excellent fuel efficiency of over 55 mpg.
Robust, high-quality chassis for riding fun both on and off the road.
Both the TR 650 Terra and Strada rely on an agile chassis based on a split-backbone tubular steel frame with remove-able rear frame and front beam bolted to the engine. Front suspension sees a torsionally-stiff 46 millimetre upside-down telescopic fork, while the rear wheel is controlled by a torsionally-stiff dual swing arm made of pentagonal steel tubing in conjunction with a centrally-mounted rear shock with progressive linkage. In keeping with its use on asphalted roads, the Husqvarna TR 650 Strada has cast wheels made of aluminium while the TR 650 Terra reflects its off-road suitability with a centrally-mounted rear shock with progressive linkage. Generous suspension travel of 190 millimetres at the front and rear makes for easy handling and a high level of directional stability combined with excellent comfort and off-road qualities. 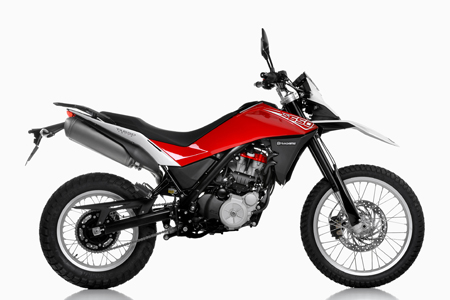 ABS Standard on TR 650 Strada; Optional on TR 650 Terra
To match the dynamic performance available, braking is handled by a powerful Brembo hydraulic single 300mm disc up front and a 240mm disc on the rear. The new Husqvarna TR 650 Strada is fitted as standard with ABS, while the new Husqvarna TR 650 Terra can likewise feature ABS if this is ordered as an ex works option. The ABS is disengageable for special uses.

Both motorcycles will be available in North America as early as fall 2012, according to a press release from the BMW Group, Husqvarna’s parent.