Just when you thought they couldn’t introduce any more new models, Honda Canada has announced the all-new CBR650F and the completely revised VFR800F as additions to its 2014 model year lineup.

February 4th, 2014, Markham, ON. – Honda Canada is very excited to announce the final roll out of all-new product for the 2014 model year. The CBR650F and the VFR800F will be joining the all-new line up of motorcycles.

Sport middleweights have always found starring roles within Honda’s range thanks to the poise and usability produced by their combination of low mass and strong engine performance. Whereas the trend recently has been toward ever-larger capacity mid-sized machines, for 2014 Honda has decided on a different direction and will produce a true four-cylinder sporty middleweight that offers high style and specification, an involving easy-to-use riding experience.

The new CBR650F is brand new from the wheels up. It has been designed from inception by a young team of Honda engineers as a sport-oriented bike, usable and enjoyable in the real world by riders of all backgrounds and experience, in environments from busy urban streets to twisty back roads.

Teishiro Goto, Large Project Leader CBR650F: “The CBR650F is designed to conquer corners with ease and also be great around town. It offers a sporting edge but makes no compromise to rider lifestyle – and is a real pleasure to look at. More and more of our customers, novice or veteran, are drawn to such a distinct identity and riding feel and it gives me great pleasure to welcome them to Honda’s newest CBR.”

Model Overview
The DOHC 649cc four-cylinder engine powering the CBR650F is completely new and engineered to deliver high torque through the low-to-mid rpm range, especially below 4,000 rpm. The development team included many engineers in their twenties, selected to produce a bike with a focus on the younger customer. They decided early on that chasing peak power at redline was off their agenda. Strong acceleration from a standing start, low/mid range torque and mid-gear roll-on throttle response were targeted as the essential elements. Crisp pick-up above 6,000 rpm and – for the sake of reduced running costs – economical cruising at highway speeds was also a focus. The engine’s also been designed to look good, with no external plumbing obscuring its lines. Sitting relatively far forward in the chassis for optimal weight distribution, the engine is truly at the heart of the machine.

The CBR650F’s steel twin-spar frame has a tuned rigidity balance along with cast pivot plates and aluminum swingarm. The rear shock works directly on the swingarm and is matched to a 41mm telescopic front fork; the wheels are a new six-spoke design. Wavy disc brakes two 320mm front and a single 240mm rear deliver the stopping power with 2-channel ABS fitted as standard.

A low centre of gravity, slim feel and high-set clip-on handlebars give excellent control and confidence. And the CBR650F’s sharp lines are enhanced by an effective but minimal full fairing that shows off the engine to the maximum.

Bore and stroke is set at 67mm x 46mm. Optimization of con-rod length has decreased the side-force on each piston and ‘breathing’ holes in the crankcase walls between the journals reduce pumping losses as rpm rises. The pistons were developed with Computer Aided Engineering (CAE) and asymmetric skirts minimize bore contact and reduce friction. Ferrous spines on the outer surface of the cylinder sleeves reduce oil consumption (and friction) with improved heat transfer.

A silent SV cam chain reduces frictional losses by using a Vanadium coating on its pins and the water pump – designed with CAE study of water flow – is compact and efficient, reducing drag.

Internal water channeling from cylinder head to cylinders does away with a great deal of the exterior hoses normally required and the motor shows off its minimal, elegant beauty and functional style. The layout of the oil filter (behind the engine) and oil cooler (front left) plus internal oil-ways further enhance the visual appeal and has enabled use of an evocative right side-swept 4-2-1 exhaust.

Chassis
The steel diamond frame uses twin 64mm x 30mm elliptical spars. Its rigidity balance has been specifically tuned – it’s much stiffer around the headstock and more ‘flexible’ in the spar sections – to deliver the desired handling characteristics and level of rider feedback. Rake is set at 25.5° with trail of 101mm and wheelbase of 1,450mm. Curb weight is 211kg.

The swingarm pivot plate is forged then welded together, while the gravity die-cast aluminum swingarm features a curvaceous shape that arcs over the muffler on the right. Adjustable for 7-stage spring preload the single-tube monoshock operates directly on the swingarm.

The shock and 41mm telescopic fork have been developed to work directly with the CBR650F frame’s performance parameters to provide supple, neutral control in all conditions.

Cast aluminum six-spoke wheels wear 120/70-17 and 180/55-17 front and rear radial tires. The wavy discs use the same manufacturing technique as the twin-cylinder NC750 series; the 240mm rear is formed within a 320mm front, saving material and ultimately cost (to the customer). The twin-piston front calipers and single-piston rear are managed by standard-fitment 2-channel ABS, ensuring safe and consistent stopping in all riding conditions.
A ‘Mass Forward’ stance gives the CBR650F its sleek and aggressive appearance. The dynamically curved fuel tank and chiseled fairing add a strong identity, as does the stubby, shrink-wrapped tail unit. Hinged at the back the tank allows easy access to the cylinder head for maintenance. Both taillight and front position light are LED.

The riding position is on the relaxed side of sporty and passengers get an ample seat and strap for security. Seat height is 810mm and a narrow middle profile helps ground reach.

The dash comprises twin large digital screens. On the left are the rev-counter and speedometer; on the right are a fuel gauge, clock, odometer and the warning lights. Both sides are lit by a white back light. 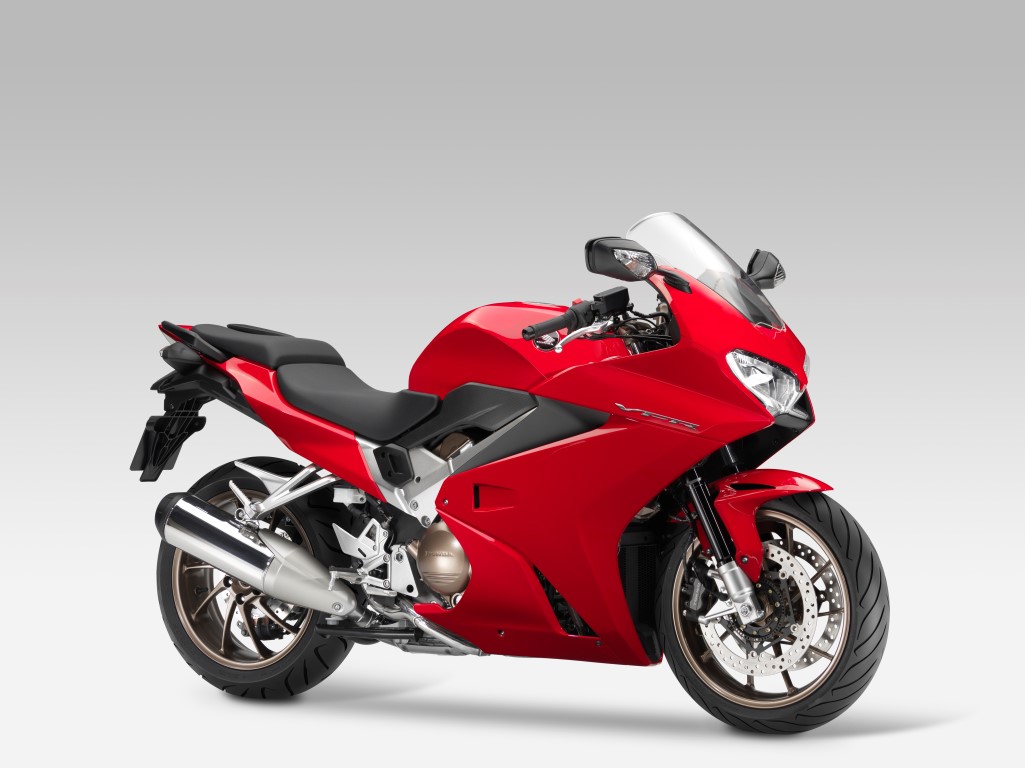 Introduction
The V4 engine configuration is a special one for Honda, going back nearly 40 years. A
complex, yet compact unit, it has a unique power delivery and a soul all its own. Honda’s
current RC213V MotoGP machine uses a V4, as does the flagship sport-touring VFR1200F.
It’s a powerplant woven tightly into Honda’s engineering DNA.
And nowhere has the V4 engine been more at home than in the legendary VFR800F – a
truly all-round motorcycle that’s always done sport as well as touring, and all areas in
between, with or without a pillion. It has inspired huge loyalty among owners over the last
two decades.

The legion of VFR800F fans know exactly what they like about their bike and also what
they’d like more – and less – of in a new model. With such an important model Honda has
listened to customers’ views; in essence they want a high-quality motorcycle with strong low
and mid-range torque, light and slim but just as capable and adaptable, with a return to the
evocative look and feel of VFRs of the past. The waiting is over – the new VFR800F is here.

Model Overview
Two factors were key drivers for Honda’s engineers in development of the new VFR800F – firstly, to retain and expand the essential VFR qualities that inspire so many, and, secondly, to update the new model with modern features and technologies.
Starting with the revered 782cc V4-VTEC engine, bottom and mid-range power have been boosted, to strike the ideal balance of enjoyable sports riding and easy commuting. The VTEC transition has been softened and the resulting power delivery is smooth, strong and linear. Honda’s TCS (Traction Control System) has been added for 2014.

Extensive work has gone into making the new VFR800F lighter than its predecessor, a whole 10kg lighter in fact. A single exhaust muffler has replaced the dual under seat design of the previous model and a host of detail changes save weight.

And then there’s the styling, considerably slimmer in the middle than the outgoing bike the 2014 VFR800F mixes a sleek silhouette with crisp, contemporary angles – with more than an echo of the classic VFR design.

Key Features
Engine
The VFR800F’s 782cc, liquid-cooled 16-valve DOHC 90° V4-VTEC engine has received significant development – mainly focusing on cam timing and valve duration/overlap – to deliver the required increase in low-to midrange power and torque. VTEC valve timing still operates one pair of inlet/exhaust valves per cylinder at low rpm, and then switches to four as revs rise but the transition is now seamless. Combined with the uprated torque, the effect is a remarkably linear power delivery and effortless overtaking at highway speeds. Bore and stroke is 72mm x 48mm, with compression ratio of 11.8:1. The PGM-FI fuel injection – with 36mm throttle bodies – has been remapped to suit the engine’s new performance parameters.

Honda’s Traction Control System (TCS) is fitted as standard equipment on this new version. It is operated from the left handlebar and a single mode covers a wide variety of riding conditions and situations.

Chassis
The diamond triple-box section aluminum twin-spar frame is unchanged; a revised die-cast aluminum subframe is 3kg lighter than the previous model. In total, curb weight is reduced by 10kg. Rake is set at 25°30’ with trail of 95mm and a 1,460mm wheelbase.

‘Elegant Sport’ is the essence of the VFR800F and its stunning new bodywork not only provides a contemporary outline, with a mixture of sharp angles and soft curves it pays respect to design elements from the VFR’s history – details like the small air intake duct on the fairing’s flank.

The VFR-signature ‘X’ headlight shape is updated and now features LED lights. Positional lights are integrated with the wing mirrors, just like the VFR1200F. At the rear, the wide, angular tailpiece offers plenty of room for a passenger and features an LED rear light unit with combined turn signals for a clean look. With its improved fuel economy, the 21.5-litre fuel tank offers a 350km plus cruising range.

At just 500mm the width around the middle cowl has been reduced by 40mm giving the VFR800F a slim and compact feel. The seat is height adjustable (789mm or 809mm) using the tool provided. There will be a Honda Genuine Accessory handlebar height spacer available, adding an additional 15mm).

Equipment
A unique and advanced approach has been used for the VFR800F’s self-cancelling turn signal system. Rather than using a simple timer it compares front and rear wheel speed difference and calculates when to cancel the signal relative to the riding situation.

A new dashboard houses a digital speedometer/tachometer plus gear position indicator, ambient temperature gauge, fuel consumption information and clock. There’s also an indicator for the 5-stage heated grips, which are fitted as standard.