At Honda’s annual journo session prior to the Toronto Motorcycle Show in December, product planning specialist Nick Smirniw previewed a host of new models and revised equipment.  We heard about the return of several rides including the CBR125R, which will be available in Repsol livery, and the CB1000FA returning in a new gun metal grey coat with gold wheels. The centerpiece, however, was a pair of versatile new street 670cc twins – the NC700X and NC700S.

“Mid-range demand is certainly building,” explained Smirniw.  “You can call it a step up from the 250 class, but that is not key – it’s a more practical choice for people who already own bigger bikes.  These bikes are aimed at a new generation of riders with practical intentions.”

Originally slated for 2013 release, Honda will have both models in dealerships by July.   The NC700X is more adventure-oriented in theme, with a full fairing, compared to its sister S model. The NC700S is naked in execution, featuring a small bikini windscreen, and is three kg lighter.  Both include a large, 21-litre helmet-sized storage area where the tank should be – fuel is actually carried below the seat, with filler access under the passenger perch.

Smirniw went on to state that the newly designed twin platform is built to produce superior fuel mileage, as well as loads of useable mid-range torque.  The paired cylinders are canted way forward at a 62-degree angle on the engine’s cases, and the 270-degree crank setup yields a v-twin type of overall engine feel.  Interesting fact? Bore and stroke are identical to the four-cylinder found in Honda’s compact Fit car. 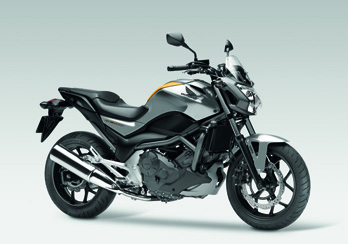 Overall, the long-stroke engine is very compact, featuring a single throttle body and twinned exhaust port to aid with meeting emission requirements efficiently and affordably.  The oil pump is driven by the balance shaft while the cam shaft powers the water pump.   Cam timing differs between cylinders, and Honda claims “power delivery is very similar to the Gold Wing”, with virtually no throttle input required while cruising in top gear at 80 km/h.

“We expect 90% of the riders of these machines to use them below 140 km/h,” continued Smirniw, who says that the NC series bikes are geared to take advantage of this fact.  The power is aimed to be most useful below 6,000 RPM, and fuel economy is, according to Honda, on par with the CBR250R.

Honda states that their goal with the NC range as to improve fuel-efficiency over similar displacement (read 600cc class) machines by 40%, but in fact the actual advantage for the NCs was closer to 56%.  Range is reportedly an impressive 400 k per tank full at Petro Can.

Rake and trail numbers are the same for the X and S models, with the X getting the more upright riding position and more suspension travel.  The X version’s large windscreen is adjustable with an Allen wrench.  Combined ABS is a standard feature, although initially only the manual transmission version will be offered in Canada.  Target pricing is in the $ 9-10K range.

Honda also mentioned another “early” arrival, the CRF250L dual sport machine, which uses the same flexible power plant used to such good effect in the sporty CBR250R single.  Built in Thailand, the all-new four-stroke is expected in Canada by mid-summer.

Canada’s quickest motorcycle back on track in 2012

Canada's quickest motorcycle back on track in 2012