by Greg MacPherson
in Industry News
0

Canadian-made Hindle Exhausts Systems are stepping up their support for Canadian roadracers abroad in 2012. The Port Perry, Ontario-based manufacturer recently announced its continued partnership with Team Dynojet-ZAG Racing’s Javelin Broderick for the 2012 AMA Pro Roadracing System. Broderick, an Ontario native, will be supplied with high performance full Hindle Exhaust systems for his Yamaha R6 during his AMA Pro rookie debut.

According to Lee Hindle, Manager of Operations at Hindle Exhaust Systems,  “We jumped on board at the opportunity to start our partnership with Javelin in the past, as we knew his racing career would go far. Since then, Javelin has far exceeded our expectations over and over. We are so excited to be a part of his debut racing season as a professional in the AMA Roadracing Series.”

Bernie Broderick, Team Manager adds, “We are very happy to be back in business with Hindle again for our third season. Especially now that the team is entering into our first year with AMA Pro Racing, it is a great feeling to know that we are heading in with companies we know and trust. Since our rider, Javelin Broderick, is a Canuck himself, there is also a sense of National pride running components that are designed and built in Canada. Hindle has always produced a world-class product and we hope that together, we can continue to promote and advance the brand in the North American market and worldwide”.

Dan Kruger to compete with Hindle Exhausts in Zhuhai, China 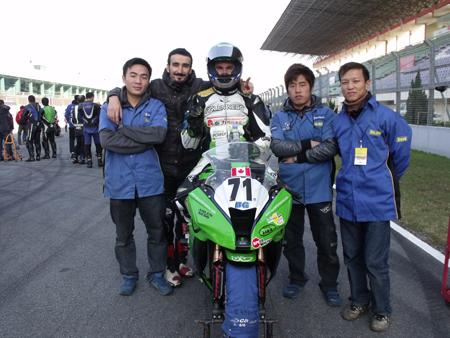 Montreal-based Kruger announced (exclusively to Inside Motorcycles that Hindle Exhaust Systems would be officially sponsoring his Monster Energy Kawasaki for the 2012 season, equipping his ZX-10R with a full Hindle race system. Kruger will also compete in the Phillip Island 8-Hour Endurance Championship for the second year in a row.