This year’s long drive to Chambly for the fourth consecutive H games was worthwhile for all in attendance. The supermoto race action was coupled with some smashing and crashing action of a demolition derby.  The race track configuration was changed from last year with a huge tabletop jump that had some riders jumping as high as the power lines followed by a set of gnarly woops that were big enough to get lost in! The pavement layout had a high speed corner and some serious switchbacks perfect for sliding action to wow the crowd while challenging riders.  The heat and humidity had a lot of riders switching from leathers to MX gear in an attempt to stay cool. This is always a risky decision due to the resulting roadrash in the case of a slip, when things go bad on the asphalt. Another interesting difference from all other races in the national schedule was that race action was going late into the night and racing would be taking place under the lights. The darkest place on the track seemed to be the table top jump and woop section where seeing clearly is most important. I can only speak for myself but I welcomed the challenge and it made for some fun racing. 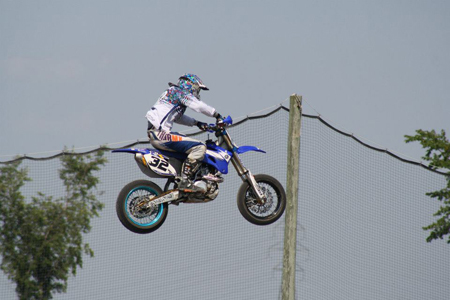 A pretty large number of spectators showed up to support the riders. A local musician played music during the evening while staging took place and in between breaks in the action. Another feature was some side by side race action as well as some intense mini -moto racing. One thing for sure is that the spectators always have lots to see and do at the H games and that is what makes it so great!

The racing was fast and furious with the results as follows: 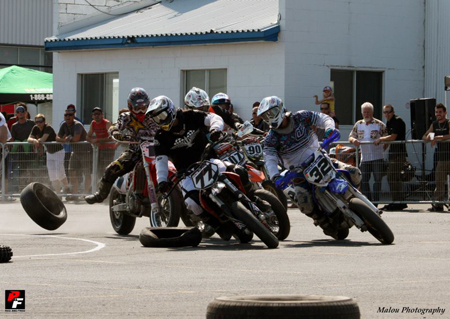 One thing I enjoy most about racing supermoto is the camaraderie in the pit area; It is like a family atmosphere away from home.  Even though some things are lost in translation promoter and racers alike make the out- of-province Ontario racers feel at home. The race action is heating up moving into the final round coming up on September 15-16th at Shannonville Motorsports Park. The points championships are up for grabs and everyone I talked to is looking forward to do battle again. I encourage all to come out and support the sport and catch some exciting race action. As the season wraps up everyone will be looking to push harder than ever to try to get on the top of the box at the  supermoto event of the year. See you at Shannonville Motorsports Park.

Buddy Ford to be Honoured by Canadian Motorcycle Hall of Fame

Buddy Ford to be Honoured by Canadian Motorcycle Hall of Fame