Race Two Silverstone wet Winner Sylvain Guintoli has a good look back from the PATA Ducati - there was a lot to see!

Sylvain Guintoli made a great debut for his new PATA Racing Ducati team, winning race two in treacherous conditions at round ten of the 2012 eni Superbike World Championship at Silverstone, U.K. on August 5. Guintoli won race one in similar conditions at round three at Assen in the Netherlands, and the calm-riding Frenchman with the English accent showed superb discipline and control at Silverstone.

A former British Superbike National competitor who lives in the U.K. with his English wife and family, Guintoli took the lead on the opening lap and dealt with the ever-changing conditions with his typical minimum of drama. After a dry warm-up lap, the race was delayed and called “wet”, the field switching to Pirelli rain tires even though it didn’t immediately rain heavily.

Guintoli’s biggest challenge came from his former team-mate with the Liberty Racing Team Effenbert Ducati program, pole sitter Jakub Smrz. Although he ran the leader close, Smrz couldn’t make a move stick and on the last lap was passed for second by race one victor Loris Baz on a Kawasaki ZX-10R Ninja.

Baz then went after leader Guintoli but crashed, fuel possibly spilling on the course. Several riders fell during the very busy eighth lap of the scheduled 18, and the race was stopped due to the treacherous conditions. Because of this decision, only half the normal number of World Championship points was awarded. 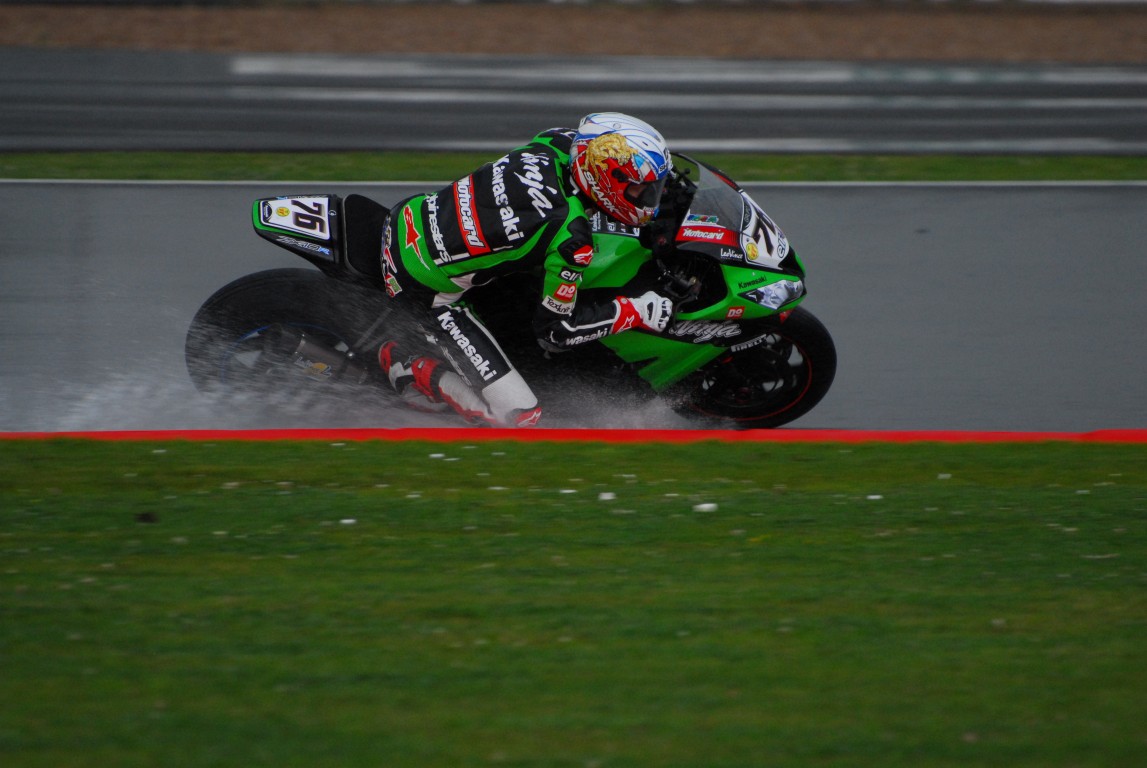 Among those who crashed on what would become the final official lap were title contender and Bas’ Kawasaki team mate Tom Sykes (from 3th), Maxime Berger on the second Liberty-Effenbert entry (from fifth) and reigning World Champ Carlos Checa (from sixth). This spate of incidents convinced organizers to stop the action. 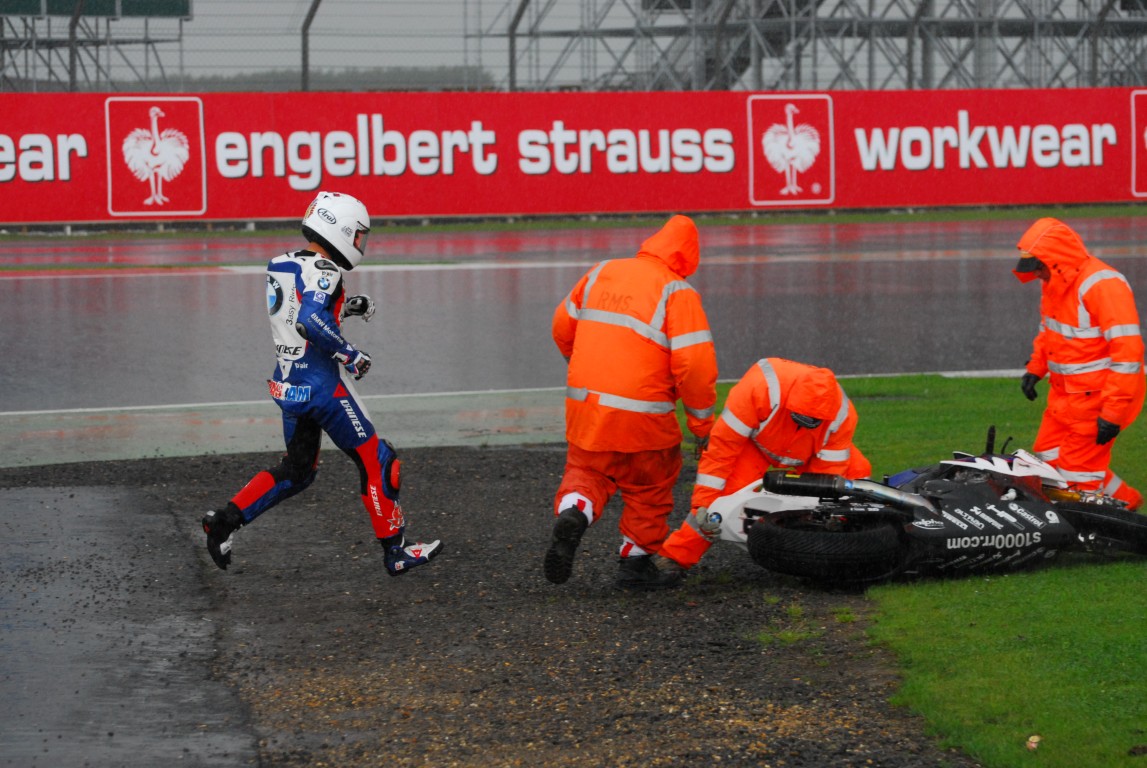 Baz was eventually credited with second place, just .88 of a second behind winner Guintoli. Third went to Smrz, less than a second back. The works Aprilia of Eugene Laverty made it up to fourth, well behind the leaders but just in front of fifth placed Berger. Checa netted sixth ahead of the privateer ParkinGo Aprilia of Chaz Davies, in seventh.

BMW’s Marco Melandri was eighth, chasing Davies, while local Honda hero Jonathan Rea was right on Melandri’s tail for ninth even though he fell at high speed in turn one.

Points leader Max Biaggi ran off track with the Aprilia RSV4 Factory and wound up 11th in the final results for race two at Silverstone. Because only half points were awarded, Biaggi didn’t suffer much in the standings, still holding the lead with a total of 274 points, followed by Melandri in second with 263.5, Sykes third at 222.5 and Checa in fourth with a points total of 220.5. 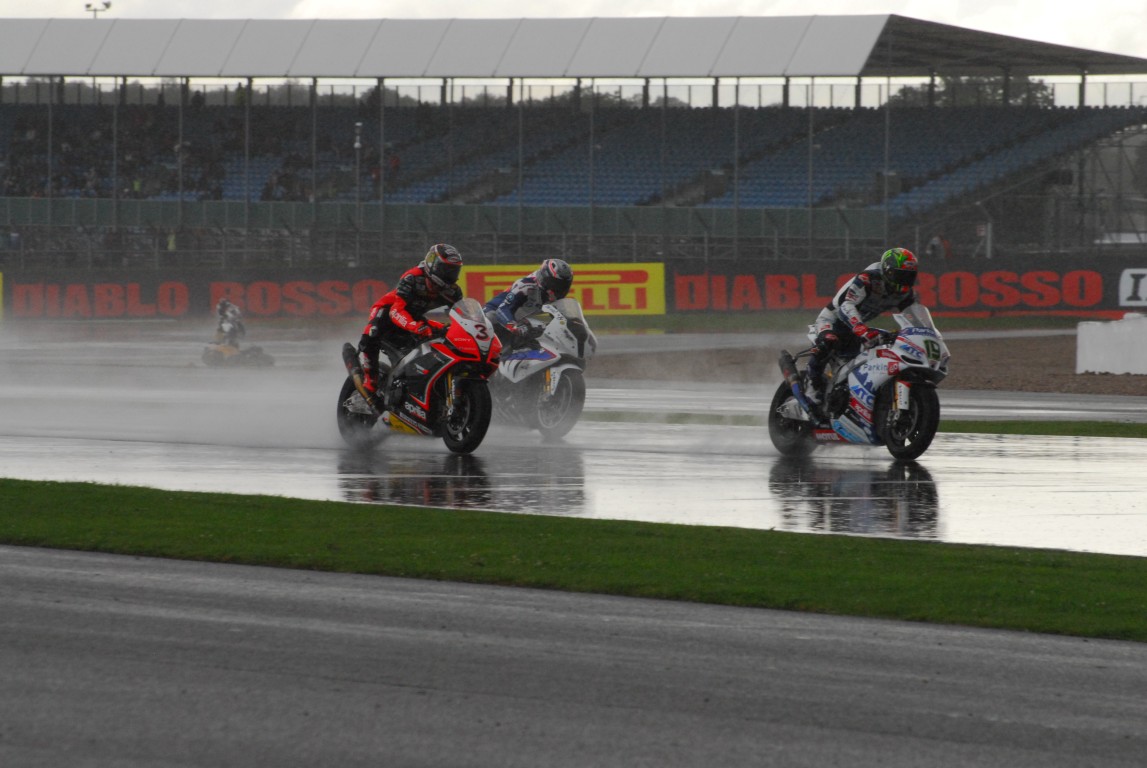 “I’ve been up and down the road, it has been a period of extremes,” explained victor Guintoli following his second win of 2012. “I did not ride the last round at Brno; we had problems during the first race today. But we really bounced back with the BATA team and this Ducati. I went from zero to hero, and that’s good, I was angry with myself. This is our first win together, but I hope there will be many more.”

For runner-up Baz, the Silverstone races marked the best day of his racing career. “The rain was really coming, we knew that,” he explained of the delayed start. “In the beginning of the race it was not so bad, but I took it easy on my tires, I knew we were waiting for the big rain. When I crashed, I was doing nothing, but there was some fuel on the track.”

Third placed Smrz was happy for a solid effort after various problems in the opening round. “We had a tough time in race one, and then when we switched to the rain tires for race two; it was so hard in the beginning,” he said. “Then there was so much water, so quickly. I’ve been close many times this year, so I want to thank all of my team for this podium result.”

Next up for the World SBK competitors is round 11 of 14 at the new track in Moscow, August 26.