by Inside Motorcycles
in Feature Stories
0

With latest iteration of BMW’s large displacemant adventurer, the 2019 R 1250 GS, gracing the cover of the December 2019 issue of Inside Motorcycles, it seemed like an opportune time to dig into the IM archives and have a look back at Senior Editor Jason Thorpe’s thoughts about the 2011 R 1200 GS that served as the magazine’s long term test bike in 2011. We hope you enjoy this article from the IM Vault. – Ed.

By Jason Thorpe with photos by Ed Gatner

At the start of this year’s Canadian riding season, we purloined the Swiss Army knife of motorcycles – the BMW R1200GS – as our long-term test bike. We set out to determine whether its significant charms would be sufficient enough to keep us happy over the course of an entire season. We have a fair bit of experience with BMW’s GS series, having ridden one version or another in a number of different theatres including South Africa, northern Ontario and Quebec. But those adventures endured two weeks at best. What would it be like to spend a season aboard this motorcycling icon?

Over the course of the season we traveled 9,600 km aboard the big GS, including a 4,500-km round trip from Toronto to Cape Breton, NS for Bikefest (The Destination Is Key, Vol. 14 Issue 7). The remaining 5,000 km consisted of equal parts commuting, day-tripping and plain old fooling around.

The GS is a reassuring bike. We never had a doubt that it would do what was required of it with competence and without complaint. In some strange way the reliable nature of this bike, which isn’t limited to its mechanical consistency, could be construed as its downfall. Given that the GS is an adventure-touring motorcycle, in some ways it can take out – or at least diminish – the adventure from a trip. A long highway grind? The saddle is exceptionally comfortable. Dirt roads? It’ll hang the tail out on those corners. Fast, open trails? The suspension’s up to it. Shopping? Just strap on the hard bags. Ho hum. 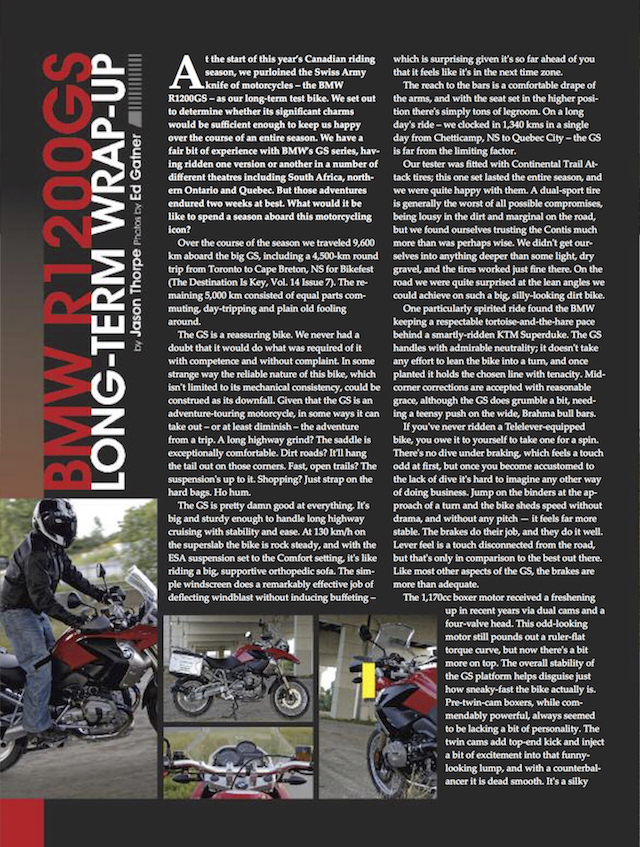 The GS is pretty damn good at everything. It’s big and sturdy enough to handle long highway cruising with stability and ease. At 130 km/h on the superslab the bike is rock steady, and with the ESA suspension set to the Comfort setting, it’s like riding a big, supportive orthopedic sofa. The simple windscreen does a remarkably effective job of deflecting windblast without inducing buffeting – which is surprising given it’s so far ahead of you that it feels like it’s in the next time zone.

The reach to the bars is a comfortable drape of the arms, and with the seat set in the higher position there’s simply tons of legroom. On a long day’s ride – we clocked in 1,340 km in a single day from Chetticamp, NS to Quebec City – the GS is far from the limiting factor.
Our tester was fitted with Continental Trail Attack tires; this one set lasted the entire season, and we were quite happy with them. A dual-sport tire is generally the worst of all possible compromises, being lousy in the dirt and marginal on the road, but we found ourselves trusting the Contis much more than was perhaps wise. We didn’t get ourselves into anything deeper than some light, dry gravel, and the tires worked just fine there. On the road we were quite surprised at the lean angles we could achieve on such a big, silly-looking dirt bike.

One particularly spirited ride found the BMW keeping a respectable tortoise-and-the-hare pace behind a smartly-ridden KTM Superduke. The GS handles with admirable neutrality; it doesn’t take any effort to lean the bike into a turn, and once planted it holds the chosen line with tenacity. Mid-corner corrections are accepted with reasonable grace, although the GS does grumble a bit, needing a teensy push on the wide, Brahma bull bars.

If you’ve never ridden a Telelever-equipped bike, you owe it to yourself to take one for a spin. There’s no dive under braking, which feels a touch odd at first, but once you become accustomed to the lack of dive it’s hard to imagine any other way of doing business. Jump on the binders at the approach of a turn and the bike sheds speed without drama, and without any pitch — it feels far more stable. The brakes do their job, and they do it well. Lever feel is a touch disconnected from the road, but that’s only in comparison to the best out there. Like most other aspects of the GS, the brakes are more than adequate.

The 1,170cc boxer motor received a freshening up in recent years via dual cams and a four-valve head. This odd-looking motor still pounds out a ruler-flat torque curve, but now there’s a bit more on top. The overall stability of the GS platform helps disguise just how sneaky-fast the bike actually is. Pre-twin-cam boxers, while commendably powerful, always seemed to be lacking a bit of personality. The twin cams add top-end kick and inject a bit of excitement into that funny- looking lump, and with a counterbalancer it is dead smooth. It’s a silky power plant that only feels a smidge course when you get north of 8,000 rpm, but there’s not much cause to head that far north any- way, as the torque peaks just below that point. As we put more mileage on it, the GS motor became even more butter-like, lending credence to the notion that these bikes don’t even fully break in until 20,000 km. 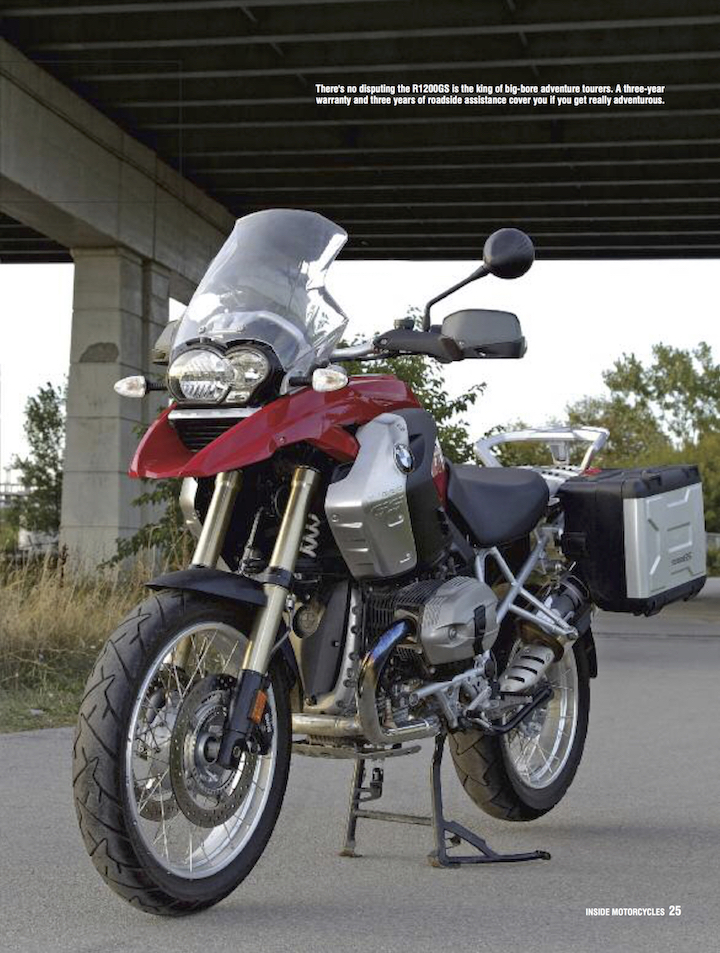 Our blood-red tester came equipped with the works – BMW’s Electronic Suspension Adjustment, trip computer and ABS foremost amongst the amenities, which added $3,500 to the $17,900 sticker price. The ESA is endlessly fun to putter with; set it to Comfort and lollop sedately along, then snick it into Sport to rail the off-ramps. It’s easy to feel the differences between the three settings, but we ended up using either Sport or Comfort, forgoing the middle (Normal) setting. The ESA also provides push-button preload adjustability for varying loads, though you’ve got to be stopped for the adjuster to do its thing when changing settings.

Putting aside the gimmicks, the suspension on the GS is generally very good. It’s taut and controlled, but we found that hard, sharp-edged impacts – which should be the bike’s bread and butter – registered a fair bit of initial harshness, with the forks especially exhibiting difficulties. It felt like there was too much high-speed compression damping.

We averaged around 280 km before the fuel light kicked on, with an observed fuel usage of 5.6 L/100km. On one extremely sedate country ride we managed to squeak out a hybrid-like 4.7 L/100km, but that’s by far the exception. We tended to drive all angry-like, for what’s the point in having a powerful bike if you don’t poke the spurs in at every opportunity? So, 5.6 L/100km it was.

For our first (and only) servicing of the bike, we stopped in at BMW Toronto. Our bike was serviced on schedule, and received a nice hand wash in the process. The bill was a reasonable $270. Other than (or perhaps due to) this one regular maintenance, the bike needed no further mechanical intervention other than adding a half-litre of oil every 2,000km.

The bags supplied with our GS had obviously experienced many miles and some hard knocks, but they still worked flawlessly. Crank a lever inside the bags and they extend out by 10 cm, which nets a very useful increase in internal volume. Give that lever a yank in the other direction and the bags shrink down. The latches worked smoothly and the bags mounted and dismounted with positive, easy-to-manipulate grace.

You can remove the passenger saddle and expose the well-appointed luggage rack, which we used on an almost daily basis. There are plenty of bungee anchor points, and the surface of the rack is dotted with rubber patches to hold stuff still.

The GS is a very easy bike to live with. The handguards and heated grips combine with the horizontal cylinders to fend off the chill in cold weather, and the saddle is unbelievably comfortable. The cockpit is a tall, commanding, spacious place from which to pilot the bike, and with familiarity the bike engenders the kind of ease you feel around a good friend. This bike has your back. It won’t let you down.

At the end of the season, despite the temptation to keep the bike longer than what we’d agreed upon, we eventually had to drop the R1200GS off at BMW headquarters. It was done with a heavy heart. 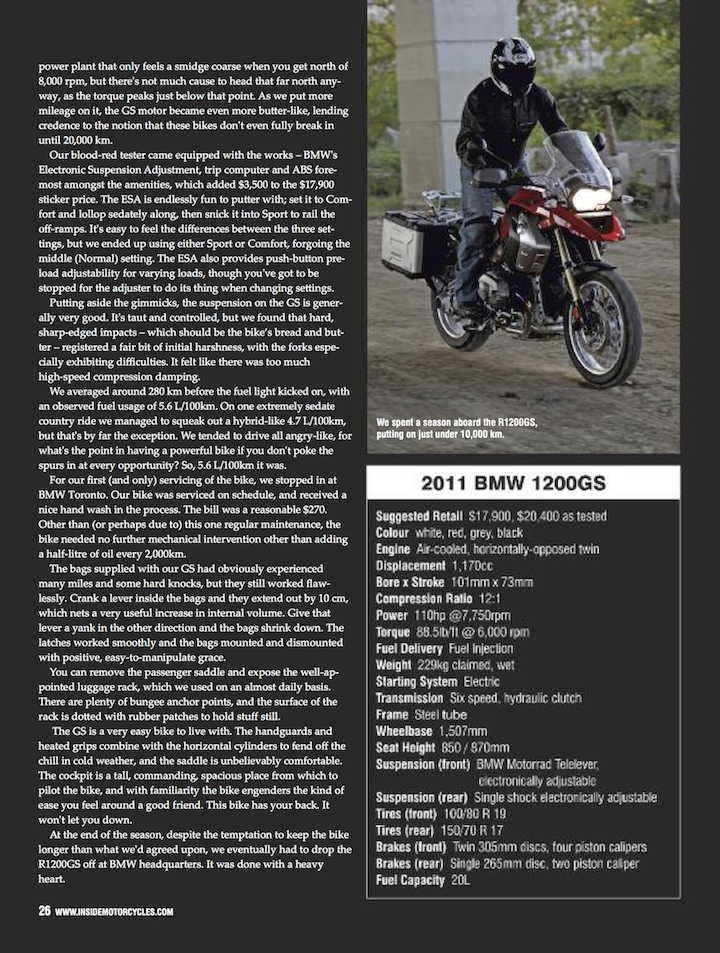 10 things to know about the Shell Malaysia Grand Prix