Friday Night Lights: A Look at the History of Paris Speedway

Story by Todd Vallee, photos by Karolina Pelc- It started as a dream between three speedway enthusiasts who felt their favourite sport, speedway racing, needed a home in Canada. Speedway was huge in other parts of the world at that point but hadn’t caught on here.

Jim Hesmer, Dave Havill and Joe Hesmer had an idea but lacked a location. Havill had some connections with the Paris Fairboard so he set up some meetings to discuss the proposition of a speedway track at the Paris Fairgrounds. Discussions seemed to go well and in 1991 Paris Speedway was born.

The 1/8th mile track is tucked away at the bottom of a hill on the property and can’t be seen from the road. Friday nights however, see hundreds of fans and riders flock to the paperclip shaped “bullring” for some action packed fun. 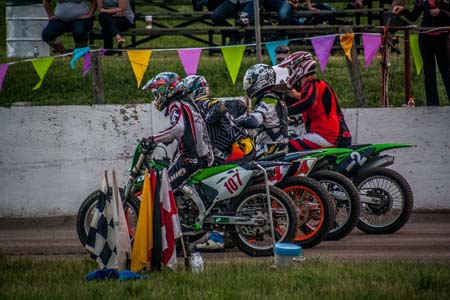 Originally when the track was built, speedway bikes were the only bikes racing at Paris Speedway on a regular basis. For those not familiar with speedway bikes they are 500cc’s, run on methanol and lack both gears and brakes. Skilled and fearless riders of these machines will fly around the track using the throttle in the corners to throw the bike sideways and scrub speed. In its prime it wasn’t uncommon to see between twenty and thirty speedway bikes at Paris on a good night. Over the years speedway numbers have dwindled however and that has caused some major changes at the track. 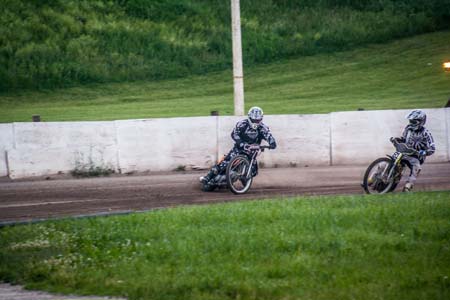 In 2010, former Canadian Speedway champion Aaron Hesmer took over as promoter of Paris Speedway and implemented some positive changes right from the get go. As a long time racer himself, Hesmer had watched both rider numbers and racing venues disappearing from the Canadian circuit. Feeling the need to put a stop to this trend Hesmer immediately introduced a few new classes to the track that once held only “Speedway” events. That season, modern 450cc machines were allowed on the track for the first time. With the 450 being the bike of choice for most riders it only made sense to Hesmer that they should be cutting laps at Paris as well. 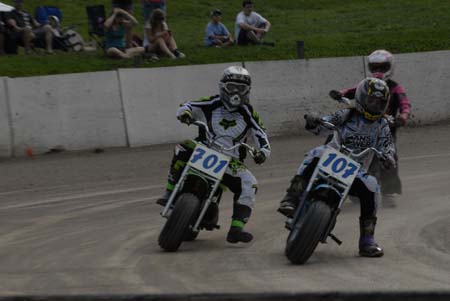 The first night that season, only three 450’s showed up to take the green flag. Fast forward to this season where on a Friday night you may see as many as twenty of the bikes spread between beginner, novice and expert classes. Hesmer also added a flat track youth class, ATV’s and even a couple of classes for the Baja bikes you can buy at Canadian Tire. 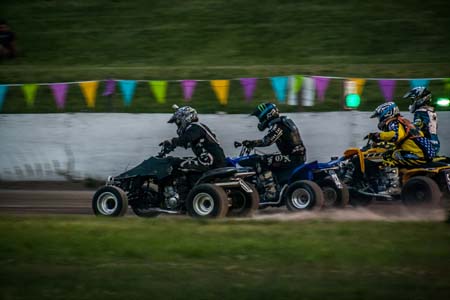 Another goal of Hesmer’s was increased track time and the oppertunity for “newbies” to give the sport a try. Paris Speedway is unique in the fact that it runs weekly practice nights during the racing season. Although many established racers take full advantage of this, it is also ideal for newcomers to give it a try without the pressure of an actual race. As well as plenty of track time, practice nights are also ideal for sharing tips on riding technique and bike set up.  Dirt track/speedway schools are also offered when there is enough interest. For a modest fee, students generally get to turn as many laps as they can handle as well as instruction from some of Canada’s top riders. 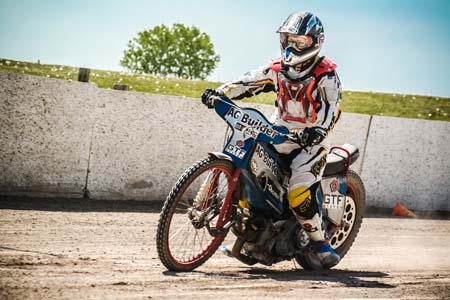 Paris Speedway does a great job of promoting fun for both the riders and the fans. The speedway is its own entity and therefore is not covered by any sanctioning body. This means that when you become a member at the speedway you will not be given a complicated rulebook to study. Most of the rules in Paris are geared towards safety and the riders well-being. As the racing is a little more low key at Paris, the atmosphere in the pits resembles one big happy family. The pits can take on the look of an overseas market at times as riders can be seen scurrying about swapping parts to help their fellow riders make it onto the track after an incident. Suggesting the racing at Paris is low key however in no way diminishes the quality of the racing action. Every class seems to have intense battles and some of Canada’s top experts can be found battling on the track every week. 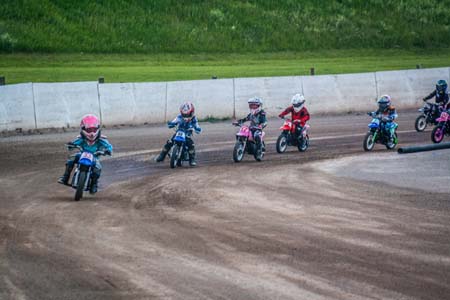 Hesmer’s focus since taking over the speedway has been on promotion and ensuring there is a strong base of riders for the future. The future looks bright indeed as the 50cc class has grown by leaps and bounds in the past couple of years. The class has now been seperated into three different divisions according to age and bike to accomodate the gaggle of kids that show up each week. Paris is the perfect size for these young racers to hone their skills and they are always crowd favourites. 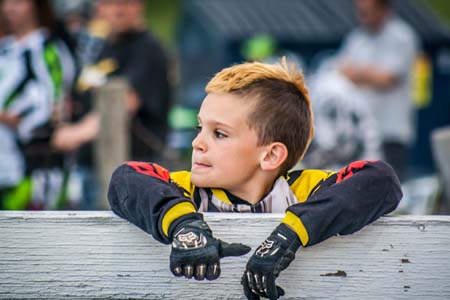 Moving forward, Hesmer hopes the track will continue to be a success while still always being a work in progress. He promises that the team at Paris Speedway will do their best to make sure that when fans and racers leave after a Friday night at the track they are all wearing a smile.

For more information about Paris Speedway, visit their website: www.parisspeedway.ca