in Reports, Results and Points
0

On a picture-perfect fall weekend, championship titles were decided during the last round of the Super Series event. The 2021 season began this past July when provincial restrictions allowed it and saw over 150 riders fire up their bikes to compete over the course of the summer. This grand finale, packed with anticipation, saw five track records being broken and some of the most exciting races of the season.

The third and final event featured the Pro track layout, a track known for its faster lap times. With faster bikes and faster speeds, it was only an inevitability that a few records were to be broken. On the first day, three of the five records were broken in the Novice, Sprint Cup and Lightweight Production classes.

The first one to fall to the wind was Bryan Fil’s 2008 record in the Novice category. 2021’s class has featured very promising and fast Novice riders. Among them, Jordan Decarie who finished runner-up in the weekend’s first Novice race but broke the track fastest lap record with a time of 1:09.880.

In Lightweight Production, despite finishing just 0.394 seconds behind race winner Ryan Vanderputten, the Veteran rider Itsvan Hidvegi proved he still has a lot of speed in him. Setting a time of 1:14.728, Hidvegi dethroned John Taverner’s record by almost a full second.

Finally, in true Elie Daccache fashion, he went out, as fast as a bullet, and beat the track record in Sprint Cup. Daccache’s time of 1:04.826 was fast enough to break his own 2019 lap record.

On Sunday, Jordan Decarie was a little disappointed about his run in the first race where his lost three positions on the restart. He battled back from the fourth and ended second, finishing once again behind Tyrone Tavares. This gave him some extra motivation for the second race in setting a time of 1:09.036, which broke the fastest time he had set less than 24 hours prior.

Ryan Vanderputten also wanted a piece of the action. Despite suffering a critical mechanical failure on his bike during Sunday morning practice, he was forced to find a way to compete in order to keep his championship hopes alive. Riding a bike on loan from David Buckland, Vanderputten logged a time of 1:04.704 and took the lap record away from Itsvan Hidvegi set on Saturday.

This on-track action was as intense as the championship battles and words cannot describe the intensity of the exhilaration, with most of the classes being decided only on Sunday. 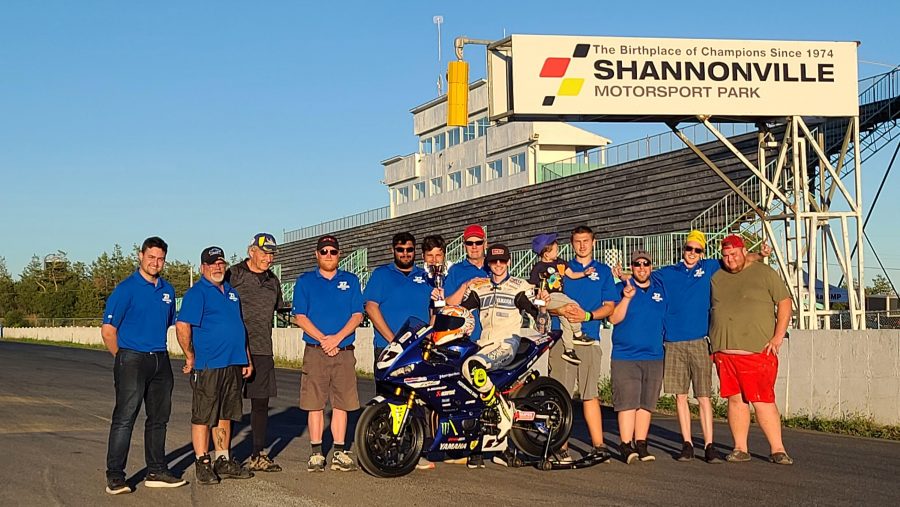 Starting out in the highly contested 19-rider Novice class, Tyrone Tavares was able to hold off a hard-charging Decarie to pick up the title by 15 points. Three wins and four poles helped Tavares graduate from the Novice 2021 class where he looks to continue his path up the ladder joining one of the amateur divisions for 2022.

Drew Weber picked up two championships in 2021, AM Sportbike and Heavyweight Sportsman. Weber, who won the Novice title last year, has made an insanely quick climb up the Super Series ladder. Securing the title ahead of Eric Quintin by 90 points in AM Sportbike and from Mike Raniowski by 22.5 points in Heavyweight Sportsman. Weber officially accepted his invitation to go Pro for 2022, fulfilling a lifelong dream. Weber is the newest rider to go Pro in the Series.

Ryan Vanderputten managed to edge out Istvan Hidvegi and grabbed the top spot in Lightweight Production by only 60 points. Mike Raniowski took home the title in Pro Sportbike, while Martin Perreault locked up the title in AM Superbike.

Finally, in the Sidecars championship, Michael Vinten and Celeste Atkinson claimed their first Sidecars title as a duo. Miller and McDonald suffered a mechanical issue during round one, which resulted in them finishing third in the final standings behind Wayne & Krista Walsh despite the hard charge at the end of the season.

The 2021 victors will be honoured during an outdoor awards ceremony held on October 11th at Shannonville Motorsport Park. With the 2021 season at a close, the series is already setting plans for a full championship in 2022, hoping to see both familiar and new faces with plenty more races to win and track records to break.

Complete results are available on the Super Series website.

For more information on the Super Series, please visit www.super-series.ca. Fans can follow us on Facebook @SuperSeriesMotorcycle.

The Vallee Report – The Value of Loyalty

Of Chopsticks and Unicorns

Of Chopsticks and Unicorns