Every fall, Milan, Italy provides the backdrop for the unveiling of the latest and greatest innovations from the motorcycle industry. When KTM rolled the production model of the 790 Duke onto EICMA’s world stage in November 2017, fans of naked bikes stood up and paid attention. Now, almost a full year later, with the production requirements for Europe’s motorcycle-centric population satisfied, the 790 Duke has arrived as a 2019 model in North America. When KTM called with an invitation to test out this machine on California’s sun-drenched twisties, the answer from IM was a resounding “YES!” Our full review will be in your mailbox and on newsstands in the near future, but in the interim here is a First Impression look at this exciting new motorcycle.

Upon initial glance, the 790 Duke fits right into the Duke family, sharing the same aggressive minimalist design right down to split LED headlight, but make no mistake: while the 790 Duke adds to the lineage of a lineup that will celebrate the 25th anniversary of the original Duke 620 in 2019, this motorcycle represents a new chapter for Austria’s best-known motorcycle manufacturer. 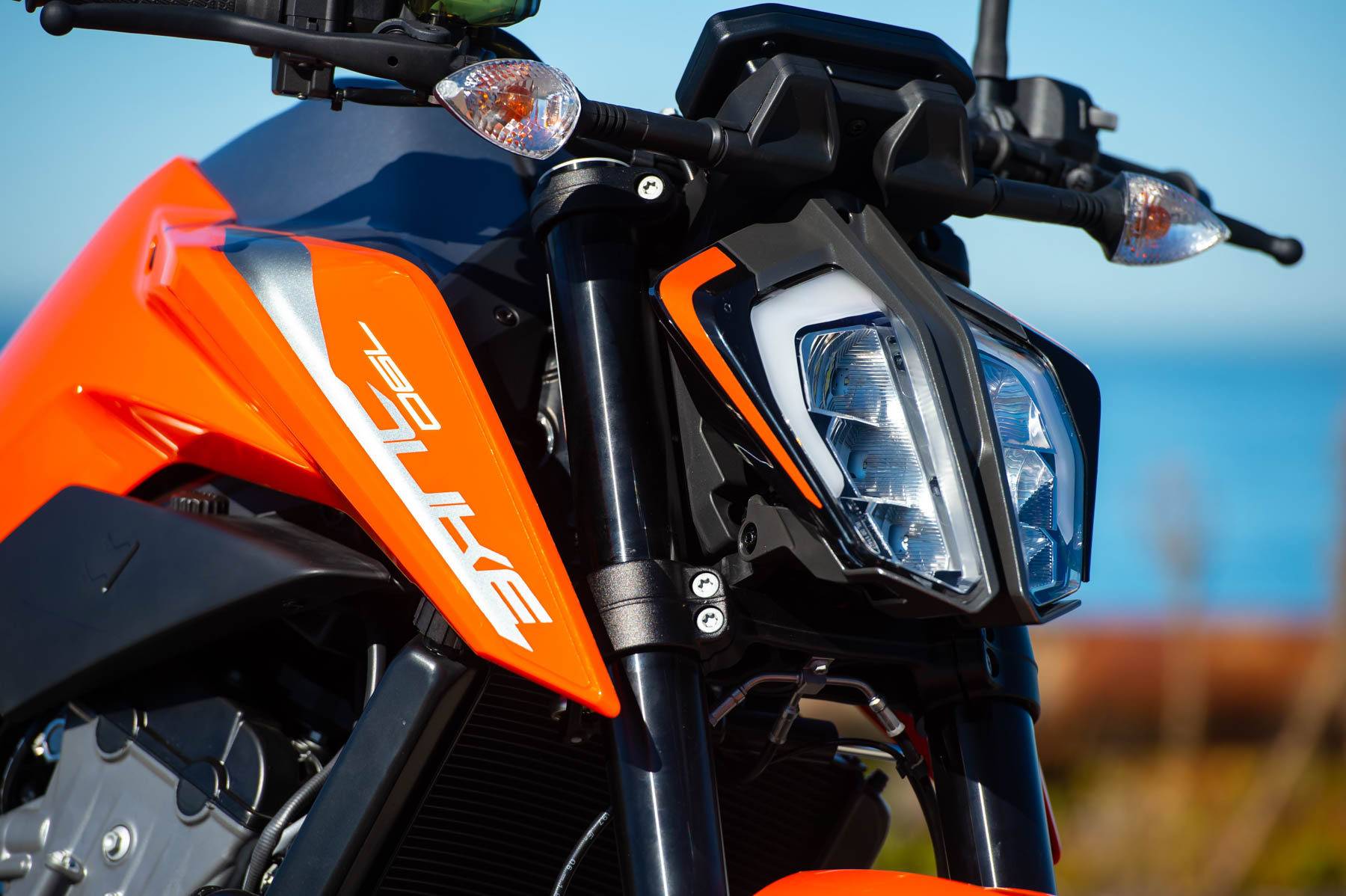 Developed with a goal of creating a mid-point in the brand’s street lineup, the 790 Duke is the culmination of over 100,000 man-hours that went into creating this motorcycle. At its heart is KTM’s all-new compact LC8c 799 cc DOHC liquid-cooled parallel-twin engine. In addition to being the company’s first foray into this configuration, the pairing of the engine as a load-bearing element of the chromium molybdenum tubular steel frame is another first for the company. Thanks in large part to this new frame design, the 790 Duke tips the scales with a svelte dry weight of just 169 kg (372.6 lb) and with a claimed 105 horsepower the resulting power-to-weight ratio moves it to the forefront of the highly competitive middleweight class. KTM representatives explained that the engine has been tuned to provide low-end torque without sacrificing the ability to pull power out at the top end. While it is easy to be skeptical of statements like these, it was immediately clear when riding the bike that the 790 Duke delivers on this goal as it pulls hard from the initial twist of the throttle right through to its 9,500 rpm redline. 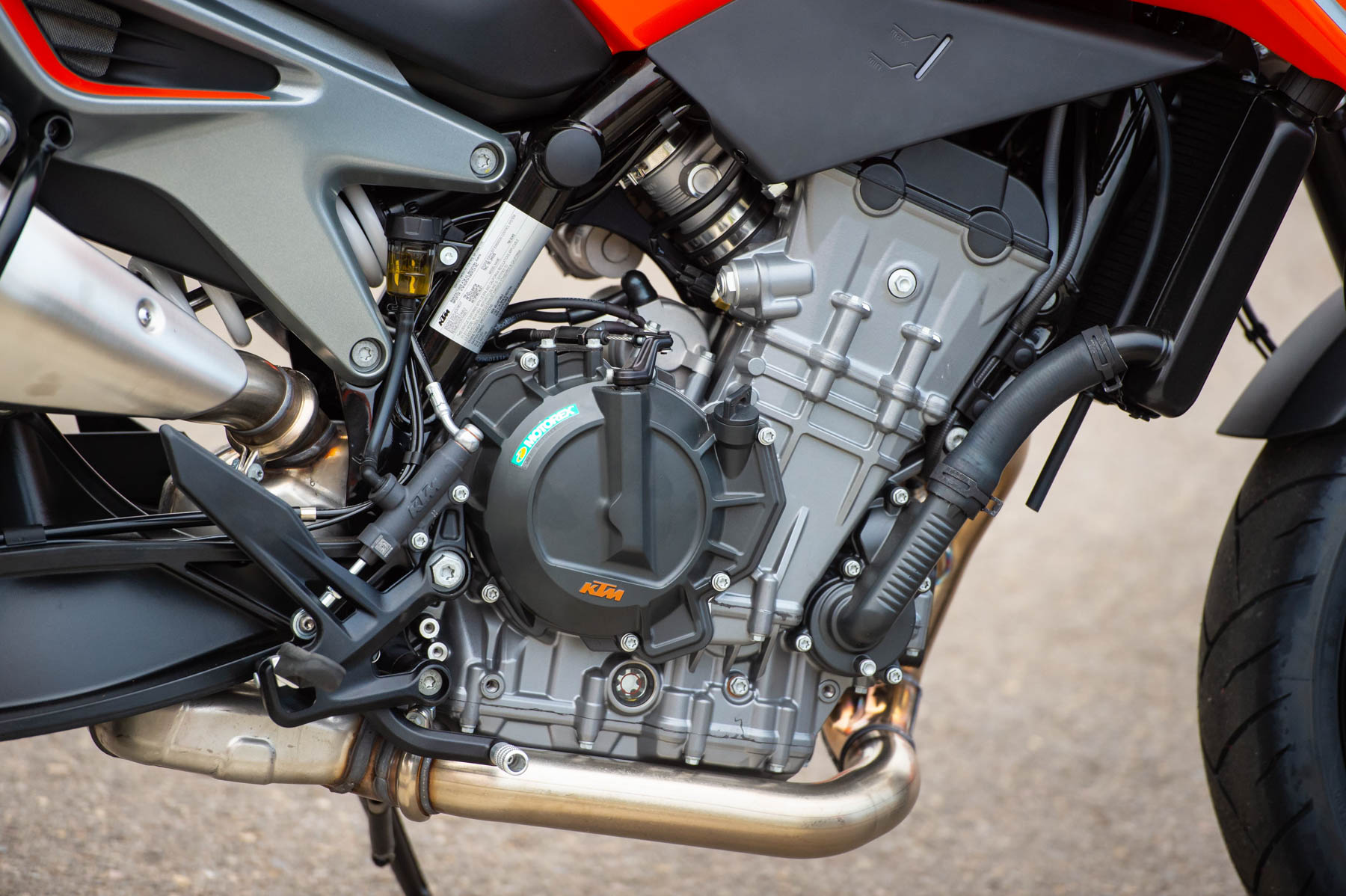 Despite having a very reasonable Canadian MSRP of $11,499, the 790 Duke is loaded with standard features including up/down quick shifter, full-colour TFT display, WP suspension, steering damper, ride-by-wire throttle and power-assisted slipper clutch. In addition to Bosch-controlled lean-sensitive traction control, motor slip regulation and ABS, the 790 Duke includes selectable ride modes of Rain, Street and Sport as well as a Track setting which allows complete control over the level of rider aids including the ability to turn off wheelie control. True to KTM’s Ready to Race mantra, the inclusion of a Supermoto ABS setting, which allows the rider to disengage the cornering ABS on the rear tire, as well as the ability to set the shift linkage to a race pattern without additional parts will satisfy even the most dedicated track day enthusiasts. Need further proof of the abilities of this motorcycle? Take a visit to YouTube and check out Chris Fillmore’s record setting 2018 Pikes Peak run. Save for an exhaust system, rear sets, slick tires and removal of unnecessary street-legal components, the bike you see in the video is essentially the same one that is waiting for you on the showroom floor at KTM. 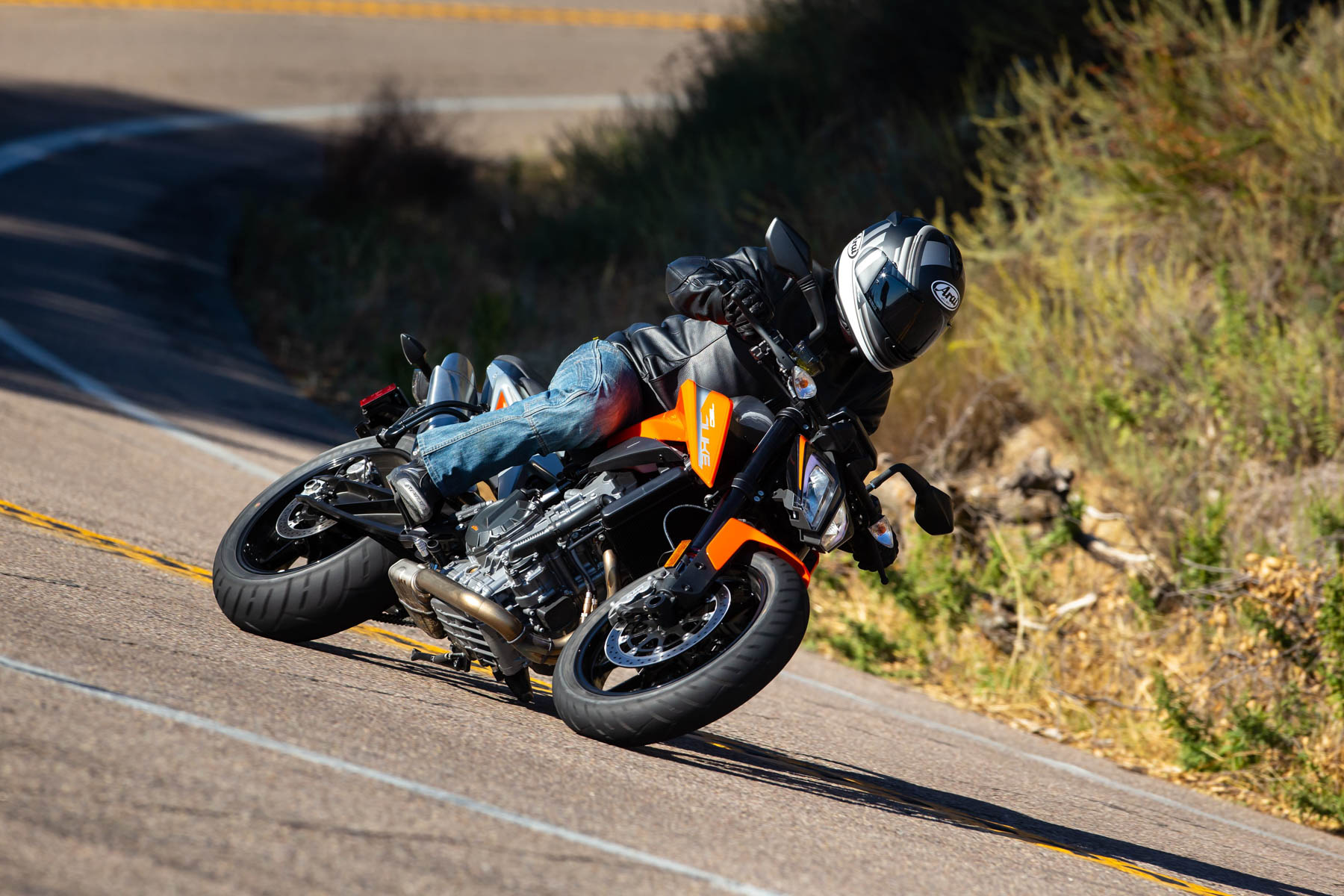 Anyone who has ridden the 1290 Super Duke or 390 Duke will find the upright, slightly pitched forward riding position very familiar, although the size of the 790 Duke actually feels more comparable to the 390. The ergonomics are very comfortable and thanks to KTM’s forethought to include ample adjustments – four options on the triple clamp plus three further options for rotation – the tapered aluminum handlebar can be positioned to meet a wide variety of physical reaches and riding preferences. Despite being raised to accommodate the level of ground clearance that the 790 Duke’s sporting intentions require, the footpegs are comfortably positioned and riders of various heights reported being impressed with the absence of any leg cramping or fatigue.

So, is the 790 Duke as good in real life as it is on paper? KTM refers to this model as “The Scalpel” which reflects the company’s stated ambition of creating “the sharpest street weapon.” In the case of the 790 Duke, these slick marketing slogans are also accurate descriptions of this motorcycle. From the first corner to the last, this motorcycle impressed with its uncanny confidence-inspiring ability to handle anything that was thrown at it. Light and manoeuvrable, the 790 Duke moves from side to side with ease and tracks perfectly through corners at grin-inducing lean angles. It accelerates with a ferocity that will make its competitors nervous and is built to be equally capable commuting across town as it is carving through canyons or tearing up the track. On top of all of this it looks great, sounds awesome and is surprisingly comfortable. Add in an $11,499 MSRP and it looks like KTM has a winning formula. 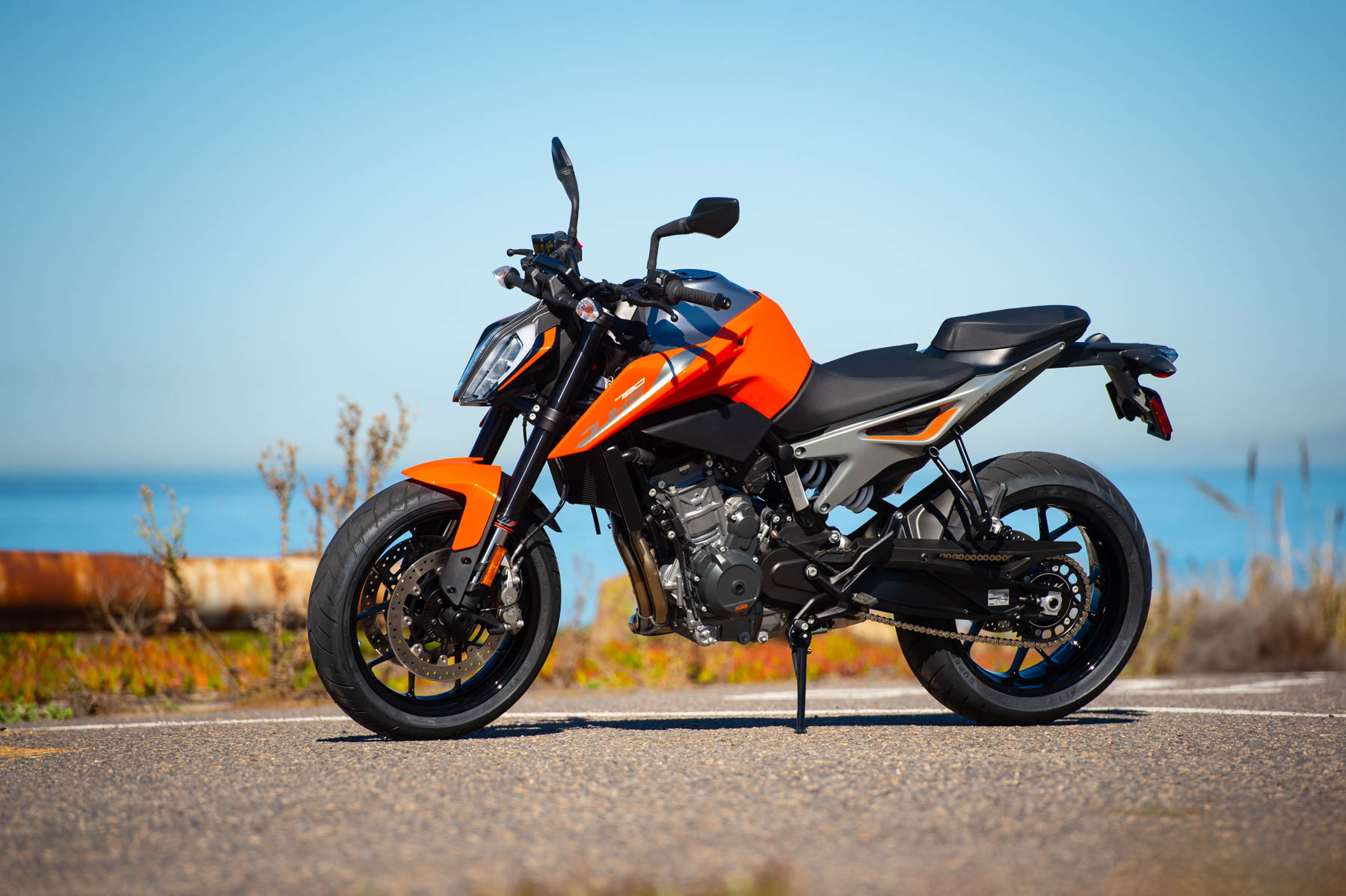