Johnathan Finn had a strong showing at the doubleheader in Calgary

On June 29 & 30, 2013, the Alberta Mini Roadracing Association (AMRA) hosted Rounds 2&3 of the Canadian National Mini Roadracing Association’s National Championship Series at Calgary’s Varsity Motorsport Park in Calgary, AB.  Participants from all over western Canada were in attendance including entries from British Columbia and Saskatchewan, resulting in over 200 race class entries for the double-header weekend.

Finn Motorsports Youth class rider Matthew Finn was looking at continuing the momentum coming out of Round 1 and strengthen his lead in the national championship points.  Always a strong starter, Matthew was able to lead the entire field of riders into the first corner, but was unable to fight off the charge for first and had to settle for a solid second place on the podium for Saturday’s Round 2.

On Sunday, Matthew was determined to finish the day on the top spot.  Unfortunately, during the morning race, Matthew was penalized 5 positions for a jump-start.  He was able to rally in the afternoon race finishing second, but with the penalty finished just outside the top 3 with a fourth place standing for Round 3. 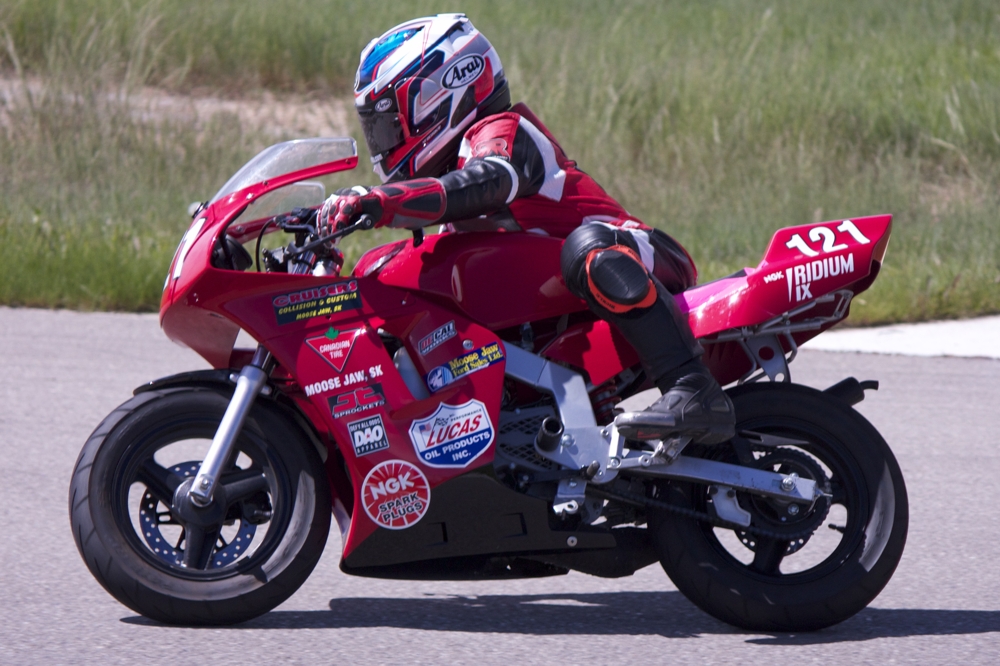 Jonathan Finn was looking to overcome the mechanical issues he experienced during Round 1 and gain much needed seat time on his HRC NSR50R and RM65 Motard.  Competing in the Spec Formula and Formula Thunder classes, Jonathan’s priority was to get comfortable on the two bikes and to put in as many laps as possible to help get the bikes performing and for the benefit of his own experience.  As the weekend progressed, Jonathan was noticeably faster each time out and gained valuable knowledge and experience on each of the bikes.  Looking forward, Jonathan has a realistic approach to the remainder of the 2013 season, which is to keep putting in the laps.

After the race, Finn Motorsports announced its newest sponsor to our team, Mike Remple & MiniMob Racing. MiniMob Racing is the leading worldwide distributor of Takegawa, Kitaco, Pro-X Motion Systems, and Shotgun Series Exhaust products. Founded in 2000, MiniMob Racing is dedicated to the promotion and innovation of the mini bike industry. With over 20 years of racing background, MiniMob Racing understands the racer mentality.

Finn Motorsports is excited to have Minimob Racing supporting the team throughout the 2013 season.  Please visit Minimob Racing at http://www.minimobracing.com

The Finn Motorsports team will be preparing and testing over the next couple of weeks for the CNMRA’s two-week west coast swing to Chilliwack, BC for Round 4 and Quesnel, BC for Rounds 5&6.

Jonathan Finn would like to thank the contributing sponsors of the Peter Lenz Forever 45 Scholarship including Arai Helmets, California Superbike School, Held Gloves USA, Impact Safe-T Armor, Performance Under Gear (PUG), Pilot Leathers, and Sidi Riding Boots. A special thank you to the Lenz family for their support.

Nesbitt debuts in AM Sport Bike and Superbike, Okubo shines in CBR250R action

Nesbitt debuts in AM Sport Bike and Superbike, Okubo shines in CBR250R action