Ducati North America invited the Canadian media to the San Francisco Bay area in mid-March for a press test involving seven of the brand’s latest models.

While the new Multistrada 1200 wasn’t quite ready in time for this ride, we were fortunate enough to spend some seat time on the Monster 821, Monster 1200S, Hypermotard SP, Hyperstrada, 899 Panigale, Diavel Carbon and the one that I’ve personally been itching to try for months, the new and much-hyped Scrambler.

Coastal Californians sure are lucky to have incredible riding roads with stunning scenery at their disposal any time of the year. Home base for our test was in Half Moon Bay, about 45 km south of San Francisco; we rode 250-300 km on each of our two ride days, on roads that varied from tight twisties in hilly forests to the splendour of Pacific Coast Highway, with its idyllic beaches and rocky drop-offs, to wide-open countryside with long, fast sweepers. These roads were obviously carefully-selected for us, and they made for the perfect setting to test sport-minded machinery like the 2015 Ducatis on hand. 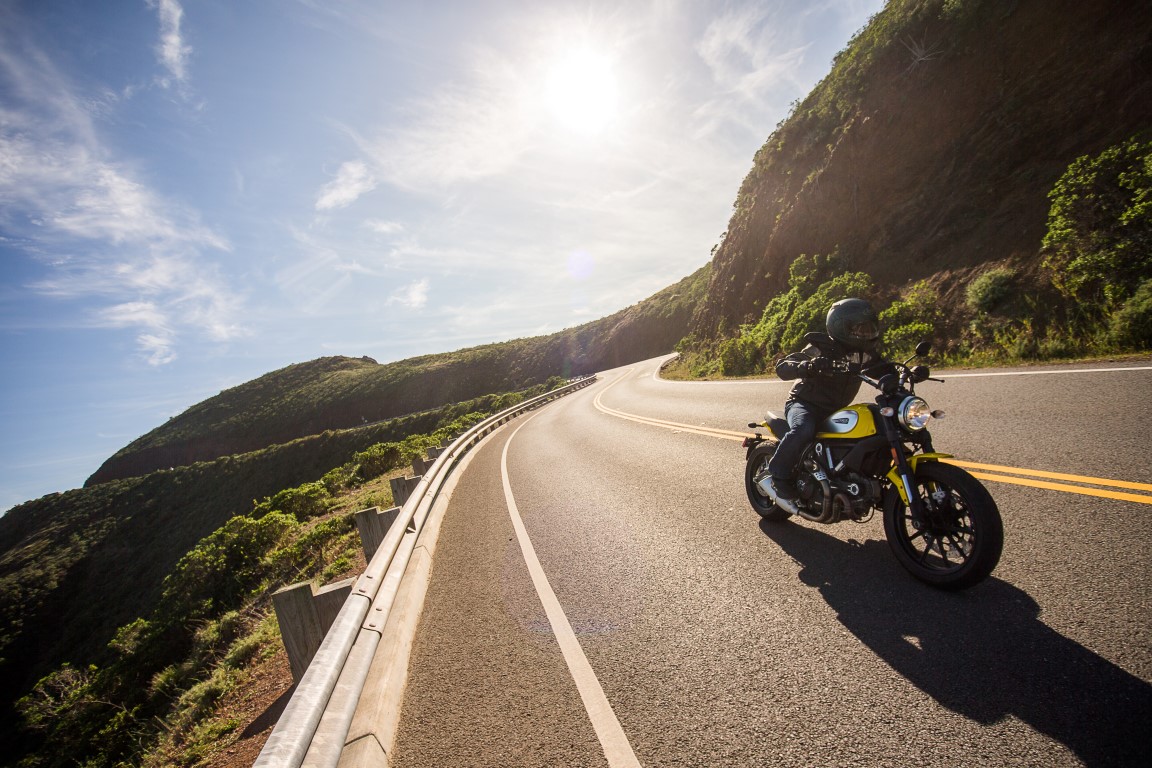 I was on the global launch for the Monster 1200 in Tenerife in early 2014, so getting into the saddle of felt instantly familiar. Despite that big 1,198 cc dual spark (two plugs per cylinder) Testastretta engine, the Monster 1200 actually isn’t that physically imposing. The seat height is welcoming for shorter riders, adjustable between 785-810 mm (30.9-31.9 in), and the ergonomics are great, the contour of the handlebar providing just the right amount of sportiness to an otherwise relaxed riding position. 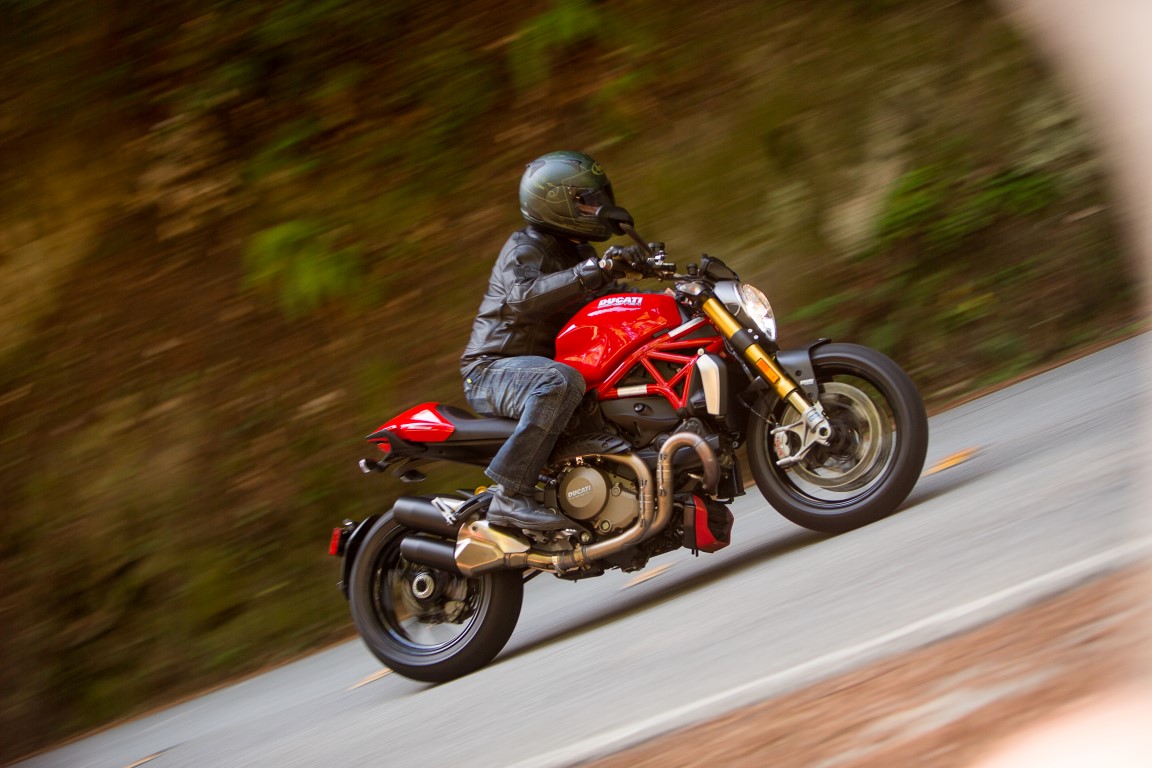 We tested the S model, which costs $2,700 more than the base Monster 1200 but comes with top suspension bits from Öhlins, 10 more horsepower and some carbon components. It handles fantastically even in tight switchbacks despite being a bit longer than the outgoing Monster 1100 EVO.

The Monster 821 looks great in white

The biggest difference between the two Monsters is in the power. Thanks to 92 ft-lb of torque, 145 horsepower and ride-by-wire throttle with instantaneous response, hammering on the 1200S when you’re in the meat of the rev range provides a thrust of acceleration that will give even the most experienced sport rider the giggles. It’s racetrack-level power in a civil riding package. 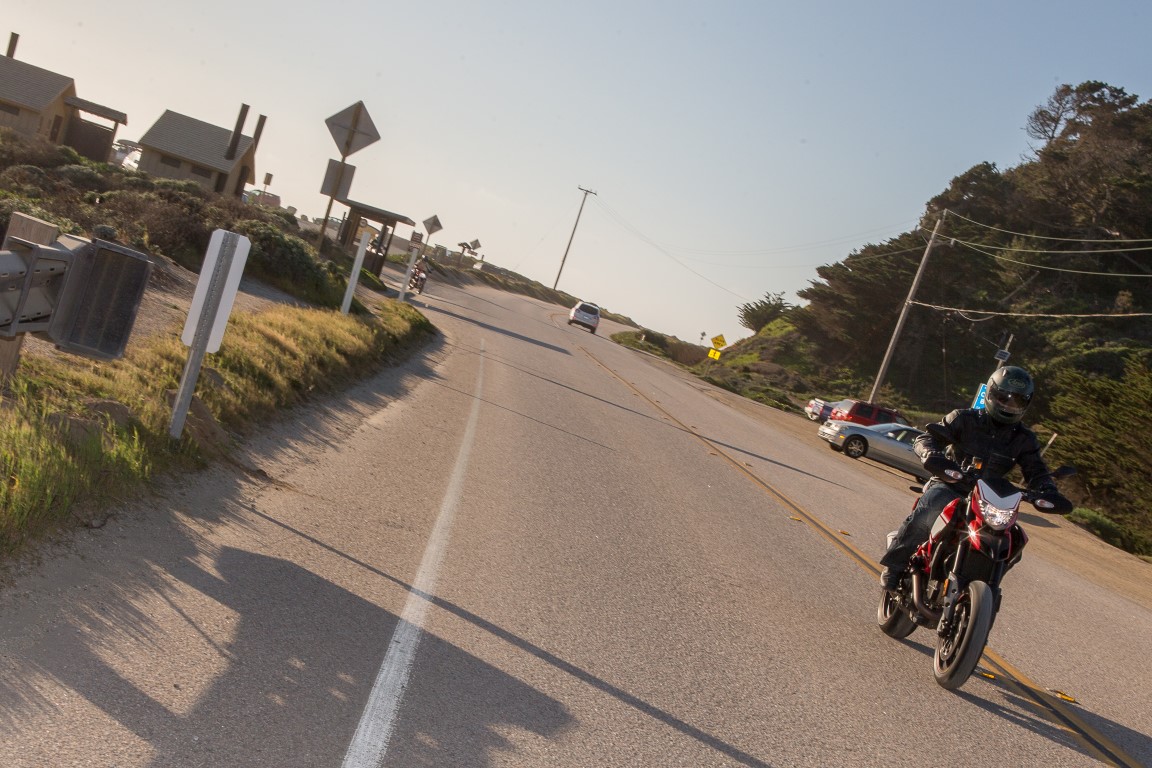 The Hypermotard is fun, but the super-tall seat will pose major issues for shorter riders

Man alive, this thing is tall! The SP version of Ducati’s supermoto machine may be narrow, but the perch is a ridiculous 890 mm (35 in!) off the ground. My five-foot-seven frame and limited inseam meant that I could only put one foot on the ground at a time, requiring extreme confidence and flat ground when coming to a stop. (The seat on the base Hypermotard, which wasn’t available for testing, is a slightly better 870 mm, though an 850 mm seat is available for that model.)

While it’s somewhat novel to be sitting so high on a motorcycle, it wasn’t enough to endear me to the Hyper SP. It handled admirably overall, flickable indeed, but the front end wouldn’t stay planted when I got on the gas or pushed too hard in turns. Some may find this thrilling, but not me.

The Hypermotard SP has a neat dirt bike vibe thanks to huge ground clearance, a tall front fender, a tapered tail, long, thin seat and standard hand guards. For a dirt bike guy who wants to bring that flavour to the street, this Hyper would make a good companion, and riders over six feet tall might find it a roomy option on the motorcycle landscape.

The SP model we tested costs $3,000 more than the base Hypermotard, and for that you’re getting beautiful forged Marchesini rims, a Marzocchi front fork and Öhlins rear shock absorber which results in a package that weighs 4 kg (9 lb) less, plus a Ducati Corse paint scheme exclusive to the SP.

The Hyperstrada is a hybrid of sorts between the Hypermotard and Ducati’s iconic Multistrada sport tourer. It’s actually a really nice bike. The same 821 cc engine that powers the ‘motard and the Monster 821 is employed here, but in a package that puts sport touring at the forefront.

The 821 cc Testastretta isn’t my favourite motor in the world—it really doesn’t behave when you let the revs dip too low, shaking and lagging until the rpms climb back into the fun zone, but what the Hyperstrada has going for it is handling. Like the Hypermotard the ‘strada is very flickable, the dirt bike stance and high handlebars converting the slightest rider input into action on the road. This makes it very easy to make corrections if your line is too wide or tight in a turn. The Hyperstrada also comes with a pair of soft saddlebags with decent storage. The 830 mm (32.7 in) seat height makes the ‘strada one of the taller offerings we tested, but not nearly as extreme as the Hypermotard. It’s actually a really nice all-round bike and thanks to Ducati Riding Modes, it’s ready to accommodate a variety of conditions and riders.