Dan Kruger has had an early start to the road racing season compared to most his counterparts racing in Canada. Competing as a regular in Zhuhai, China, Kruger started the 2012 season on the right track with 2 second place finishes during the double header of the Pan Delta Series Superbike Premier Class aboard his Speed Up Asia prepped Kawasaki ZX-10R. With 27 riders on the grid and riders in from the FIM Asia GP Series and Japan Superbike Series, the competition was fierce and a new lap record was set in the process.

“I qualified on Friday with a flying lap of 1:386. I only did 1 qualifying lap and it turned out to be the fasted lap I have ever done at this circuit,” said Kruger. “Unfortunately for us, an up and coming Superbike star, Takuya Fujita, only 17 years old, entered the event as a pre-season warm-up for the JSS and set a Superbike Lap Record of 1:37816.”

“The bike was hooked up and the Pirelli’s were amazing. The bike seems to have more top end power with the Hindle Exhaust.  We still need to work on the Electronics and create a map that gives us more mid-range power. “We actually raced without the quickshifter which was tough on me since I am so used to using one” commented Kruger.

This was a big weekend for Speed Up Asia, being their inaugural race weekend with so many people watching how they would fare.  “We surpassed everyone’s expectations including our own” said Corrado Savazzi (One of the Team principals) “We will be testing for an entire week in April and will be 100% ready on all fronts for the June Pan Delta.”

As far as the racing went, there was very little passing as the top 4 pulled away from the rest.  In Race 1, Kruger could never challenge the leader and ended the race almost 7 seconds back.  In Race 2, the gap between Yakuya and Kruger was never more than 3 seconds.  It was much closer but the Japanese rider rode smooth and never gave Kruger a chance to make a move.

The weather was cold and damp for the entire week leading up to the Pan Delta.  When the racing started, the rain clouds lifted and both events were run in the dry and warming conditions.  There was a big turnout in the grandstands as motorsports continues to grow at an exponential rate in China.

The team is working on a Macau GP entry for November as well as preparing a 2012 Kawasaki ZX-10R.  The 2011 ZX-10R will remain as the back-up bike since Macau has a reputation of being hard on bikes and riders.

Speed Up Asia would like to thank all of our Sponsors including Titanic Kawasaki, Pirelli, Motul, Hindle, Epic, Monster, and of course the mechanics for all the hard work the team has invested in getting the race bike set up and competitive. 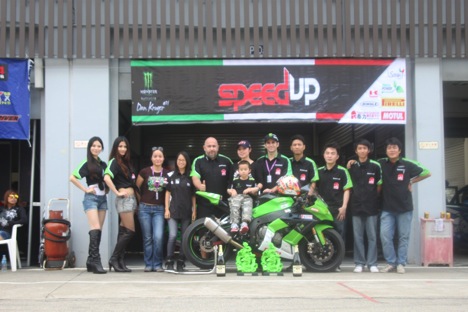