In Part 1 of my ‘Testing at Suzuka’ story, I told you about the process of getting to the world famous Japanese track and getting prepped by a top notch team to test a top notch machine. Have a quick read of Part 1 if you haven’t already, and then dig into Part 2 – the on-track experience…

Time to fire up the bike…. I was putting on my helmet and wasn’t facing the bike when they fired it up.  I had an instant feeling of panic when it came to life.  It was then I realized that I was about to get on a factory-prepared Yamaha!  If I closed my eyes, it could have been a MotoGP bike being warmed up for me.  Actually, it could have even been a muscle car from the 70s or even a Ferrari – the deep engine roar was intimidating to say the least as I could feel the power vibrate through my body.

It was also at that moment that I realized I had never ridden a fully race-prepped big banger, nor had I ever ridden or even walked the Suzuka Circuit before – heck, I never even played a video game that had Suzuka on it.  I took a deep breath and as much as I was a little freaked out at this very moment, I also quickly smiled, soaked in everything, and remembered that it was this very feeling that helps keep me driven and the very reason I enjoy this sport so much.  I remind myself regularly how lucky I have been, and continue to be, in terms of this sport and all the cool experiences.

On the track, I was having trouble getting any grip front or rear.  The first few laps were very tense as the back end kept violently stepping out since I was getting used to the bike’s powerband as well.  I was really confused why I was sliding around so much.  I am a diehard Pirelli fan, so much so that I had to convince the Dunlop-sponsored team I was testing for to allow me to bring over my own tires! (Thanks Kevin… and Fed Ex.)  New bike, new team, new track, but at least I’d be on tires I know and trust. I never did sort out the grip issue during the test.

I also had trouble figuring out one of the chicanes, which was troublesome as I kept going into it too fast and that threw off everything.    I had a big crash at the end of Day 1 that could have been much worse than it was.  I was pretty sure I had broken my leg, but in the end it was a groin injury.  I also had some heavy bruising on my right arm.  No broken bones, but a badly damaged race bike.  The good news was that I was already up to speed and had turned some laps that confirmed I would carry my own weight for the Suzuka 8 Hour.  We all were relieved when the lap times dropped to a respectable time.

The following day, I could barely walk and I just rested. 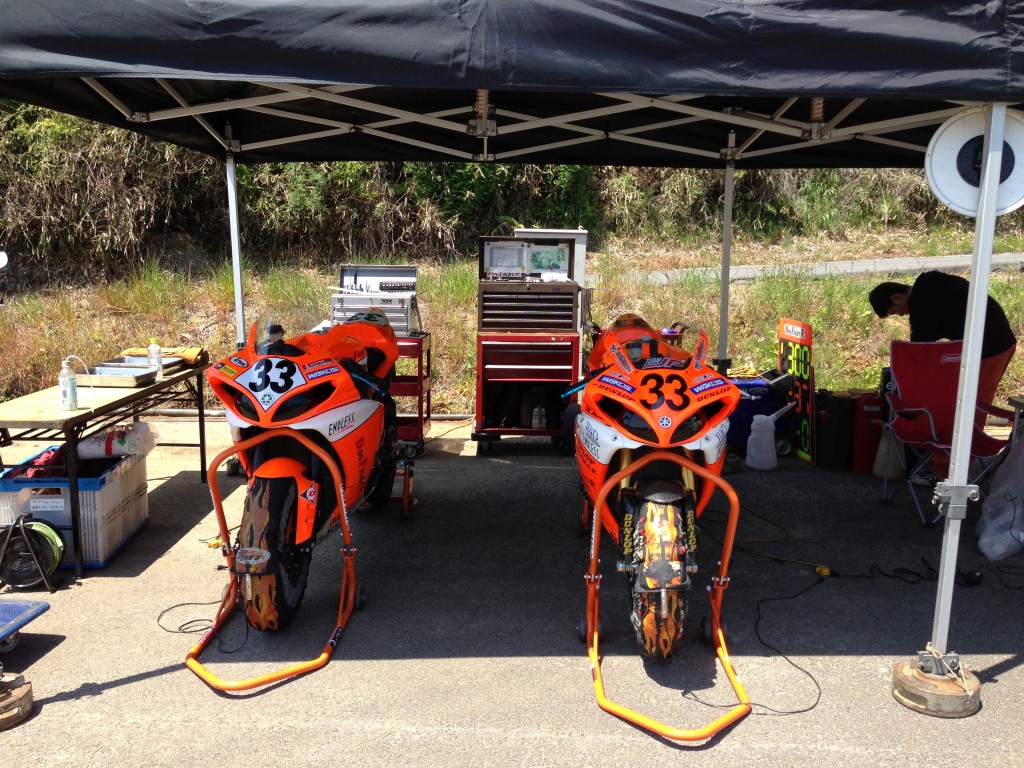 We finished the test the next day (Day 3) and the team had spent the previous day moving all the latest ‘kit’ parts to the ‘B’ bike.  I was feeling tremendous pressure since I was in a lot of pain, I had already put some quick lap times in, and now I was onto the team’s back-up bike.  Crashing was not an option, yet they expected me to go quicker.  They had a race coming up 10 days later as part of the Japan Superbike Championship as well, which added more pressure to me.

Unfortunately, my injuries were still in the ‘getting worse’ stage and I needed several people just to lift me onto the bike.  If you’ve ever had a groin injury, you can relate…  They are strange injuries since they take forever to heal, yet you can still train on an elliptical with no problem.  After a few laps, I was again having a really tough time getting traction.  I am also extremely used to Kawasaki’s kit traction control.  The Yamaha had factory electronics/TC but we never did get it set the way I felt most comfortable. I started getting some pretty wild slides and even front and rear drifts.  At one point, I was about to low side and picked the bike back up with my knee slider/leg.  I knew that I would have to pack it in for the day as my leg muscles were not strong enough to help control the bike.  I felt another crash was imminent if I stayed out.

I put my head down and was ready to give it my all for my lap and as luck would play out, I had a fairly open track, lots of sliding around but I managed to stay on the throttle.  I still slightly messed up the same problematic chicane, but ended up putting down my best lap of the test by almost a full second.  I kept pushing as I would see each interval on my lap timer and the lap kept getting faster and faster. I immediately pulled in, was lifted off the bike and that was the end of that.  The team was quite happy that I put the fast lap in and that the bike was in 1 piece.  My lap time was actually right in line with their expectations/predictions.  It beat my expectations by a mile!

That night at dinner (more uncooked wildlife, see Part 1), they figured that I would be able to consistently manage 2:12 lap times but could possibly do a sub 2:10 if need be and with fresh tires.  Takuya Fujita, one my teammates is fast – I am talking  World Superbike fast – and he is only 16!  He is amazing to watch an a great kid on top of everything.  He stands out among everyone no matter what track we are at or who is sharing the track with him at any given time. I would be a good balance to the team as I am generally a very consistent rider and love endurance racing.

To be perfectly honest, Suzuka is not one of my favorite tracks.  I picked it up relatively quickly due to my love for fast race tracks, but I have been very spoiled lately as Phillip Island, Motegi and Zhuhai all have amazing grip – even in the wet.  I don’t mind sliding my bike around, but I never really found my comfort level at Suzuka. And the crash hurt… a lot!

Update: I ended up having to back out of this July’s 8 Hours at Suzuka since my baby girl (already named Kaitlyn) will be born most likely on the very same day of the race.  I let down the team, and it was a decision that I did have to think about for a while.  The funny thing is that my wife gave me the green light to go and was very supportive if I decided to go.  In the end, it was my own decision 100% to cancel.

I will do everything I can to get the chance to race the 8 Hours a year from now;  I hope I am given that opportunity.  However, missing the birth of my baby would be something that I could not get another chance to do ever, so that put everything in perspective and made the decision easy for me (OK, maybe not that easy). Actually, I still shed a tear thinking about the missed opportunity, but I am betting that every time I pick up my baby, I will be glad I made the choice that I did!

Rossi returns to the top at Assen

Rossi returns to the top at Assen