I will never forget the first time I crashed while testing alone on the Zhuhai circuit in China. It had rained earlier in the day, but there was a dry line. I was on a fast lap but ran out onto the rumble strip coming out of a corner, and immediately high-sided (so much for traction control!!!). I wasn’t going fast, but I went straight up in the air and came straight back down.

The moment I landed, I knew there would be some injuries.  There was an immediate silence, which was the weirdest thing of all.  I remember the grass was still wet from the morning rain; I did the standard wiggling of my toes and fingers to self-diagnose any serious injuries.  I remember just lying there and then realizing, I am all alone and hurt.  It was an eerie feeling.  In the end, I broke my ribs, bruised a lung and had a broken wrist.  It was a pretty bad one.  It was a good 3-4 minutes before a vehicle came, and I bet 10 minutes before an ambulance arrived and took me to a hospital.  It was that first 3-4 minutes that will always stick with me.  Total silence.

Once again, I now look back and realize how much I appreciate track volunteers in Canada.  We really don’t thank them enough.

The ambulance ride had more action than a World Superbike race.  I could (and might) write an entire blog about driving in China, but being in an emergency vehicle in China where absolutely no one gives you the right of way… now that is interesting.  The hospital itself was something out of the 1980s.  The equipment at this particular hospital was old and didn’t look like it even worked.

Before hospital staff would even see me, the team had to pay up.  Once paid, we got immediate attention.  I think being a foreigner helped.  I remember being pretty groggy as I had smacked my head during the crash but I was still smiling (at least on the inside) as there were people smoking inside the hallways and young children running around with crotchless diapers (still not totally clear on the concept of those…).

There was no English spoken or understood, so I was really out of the loop.  Funny how little you actually care when you are in pain.  They put me on a drip and I just assumed it was for hydration, but wasn’t sure and waited to see how I felt.  When it came to giving me pain meds, they refused to inject my arm and made me roll over so they could stick the needle in my butt.  I think I was 10 years old the last time I had a needle there!

X-ray time… they were ready to literally start a photo shoot with me using a radiation-happy camera.  In the corner I noticed a pile of lead blankets with dust on them.  It looked like they had never been used.  I explained to my team manager that I wanted them to use one with me as I didn’t feel like leaving with cancer. They said something in Mandarin and eventually brought one over and covered my family jewels.

By now, the pain meds were kicking in big time and I was feeling pretty good.  I started thinking really crazy thoughts, which wasn’t hard to do since everyone seemed to be yelling or at least talking extremely loud, and I couldn’t understand a thing.  I know they were talking about me and it was a pretty surreal feeling as I remembered that I been warned many times, “If you get hurt, get to Hong Kong. Do not get treated in China if at all possible.”  Keep in mind I was at a regional type hospital; larger cities like Beijing, Shanghai, and Shenzhen have state-of-the-art facilities that are up there with the best of them worldwide.

A day later when I was ready to leave, they gave me a bag full of medication.  It was all with Chinese writing and I had no clue what anything was. I was supposed to catch a flight that day and asked the doctor for one more needle in the butt, he pointed to the meds he gave me but I pleaded with him and he complied.  Once again, I was feeling no pain.

I have raced in Asia for four years and am happy to say that I don’t crash that much. It is so challenging to get replacement parts into mainland China that you really think twice about pushing the envelope too far.

I will say with a hint of guilt that at least when you crash during a race weekend or an official test, there are at least 20 photographers snapping shots and video, so it is well-documented.  In the end, we racers still like talking about our crashes!

p.s.I can’t help but share a few old crash stories… I remember racing years ago in the Canadian national series when I had a crash at Shubie.  I was right in front of John Sharrard and it was the final lap.  I was racing with a cast on my hand and tried to hold the throttle wide open and simply hang on down the back straight.  I really wanted to beat John, as he was pretty much the opposite kind of rider to me: smooth, technical, and calculated. I wasn’t!  However, that didn’t work out for me as I high-sided at speed and ended up in the trees, battered and bruised but basically fine.

I also remember having a crash at Shannonville where I got t-boned in a slow corner by another rider and we both went down.  We couldn’t have been going more than 30 km/h.  I broke my ribs, had a concussion, and broke my finger so bad that it has not been useable since that day.

My point of this is that spectators see the spectacular crashes and think the worst when, at least in my case, the fast ones seem to work out OK but the slow ones are where the solid impact is, the pain is, and the injuries happen… I have had two crashes in China at top speed, the first one in oil going into Turn 1 which looked horrific but wasn’t that bad, the other when my front brakes failed and I ran off into a deep gravel trap which luckily scrubbed a lot of speed. Again, it looked terrifying, but I was fine.

I will say it one more time: with the safety initiative in Canadian road racing including air fences and fantastic corner workers, there is no safer place to ride. 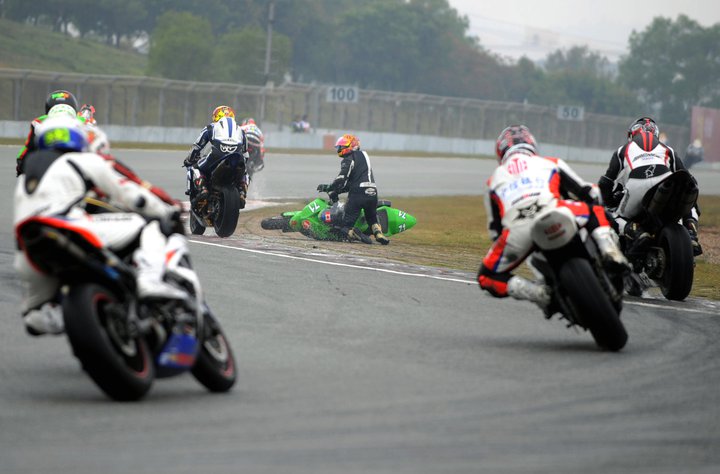 Last Minute Gift – a subscription to Inside Motorcycles!