by IM Admin
in Dan Kruger
0

Crashing hurts, it can be embarrassing... and it's expensive.

Just about anyone who has thrown a leg over a race bike has most probably also experienced a crash or two.  Crashing sucks!  It is expensive, dangerous, and sometimes even embarrassing.  Nobody that I know enjoys crashing… period!

Unfortunately, crashing is a reality in Superbike racing.  It is a highly competitive sport and races are run in pretty much all weather conditions (well, not snow!). There are also mechanical failures, tire failures and sometimes, it happens in that split second when you lose your focus.  That’s all it takes to find yourself sliding down the track.

Racers spend a lot of time talking about their crashes, other peoples’ crashes and all the close calls that were “almost crashes”.  Some might even say there is a hint of bragging.  I also have contributed my fair share to pharmacies, bodywork suppliers, and riding gear suppliers over the years.  Most of my crashes early on were the result of being caught up “in the moment” during a race.  I rarely crashed in practice sessions or on track days because I would slow down and ride more cautiously… too cautiously in fact.  Funny thing now is, I rarely crash in races and tend to crash more during practice or testing as we push the limits and look for the perfect setup.  It hurts just the same, but the biggest difference is I am riding quicker now yet crashing much less.  When I do crash, I can usually understand what happened and why.

Enough of the philosophical stuff… many of you reading this have experienced a track day or a race event in Canada, the USA , or even in Europe, Australia, or Japan.  There is a rider’s briefing, review of the flags, how the sessions will work, and then away you go.  Do a warm up lap, have a look at all the corner workers and have some fun.  Usually one of the last things you see before entering the track is a marshal controlling the riders entering the track and an ambulance or two. I now realize how reassuring that is to see.

Now imagine having a track like Mosport all to yourself for the day.  A world class facility, no other bikes, just you, your bike, and your onboard lap timer.  Sounds too good to be true right?  Four years ago when I first was lucky enough to ride in China, I was in just that scenario.  I was at the Zhuhai Circuit, a world class facility, with a beautifully race-prepped bike and the track to myself.  The moment I left the pit lane and made it maybe a quarter of the way around the track, I had a strange feeling.  It literally took me a full lap to realize there weren’t any people around.  No corner workers, no marshals, no spectators… nothing!  I was all alone.  The moment I came to terms with that, different thoughts started racing through my head.. but mainly, what happens if I crash and get injured?  That first session was a slow one as I was learning the bike and the track.  When I came in, I immediately asked my team what would happen if I crashed?  They advised me that the entire circuit was monitored with closed circuit cameras in a control room. I couldn’t help but be reminded of the security guard in a movie that is sound asleep in front of all the TV monitors as the crime takes place! 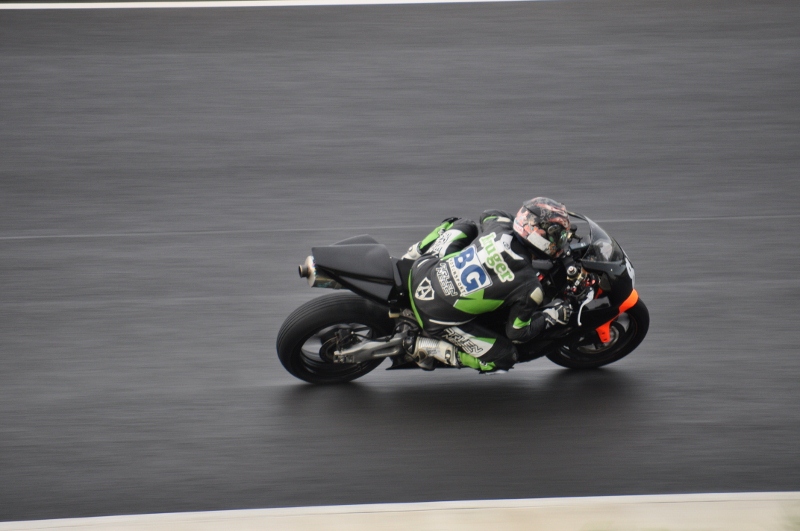 Now I felt a bit better.  However, there was still no ambulance around.  My team told me there was a helipad within the circuit.  Again, that was terrific but there was no helicopter parked there.  I quickly realized that I was basically on my own.  I only really gave it some thought several years later and appreciated seeing actual corner workers when I used to ride in Canada.  I sure do love Canada!

I must state the irony to all of this.  Here I am in the middle of China where there are a billion people hanging out, the country where just about every global company comes to enjoy the benefits of cheap labour, and I am at a race track where they utilize state of the art CCTV to monitor the track.  If there was ever a place where I thought you might find hundreds of corner workers, it would indeed be China.  For the record, race weekends have track marshals, corner workers and ambulances.  Also, the Zhuhai Circuit is run very professionally in all aspects.  I don’t want to give the wrong impression here but want to explain how different it is.

Over time, you actually become ignorant to the fact that you are on your own.  I don’t even think about it four years later.  That is, until I crash.  I have had my share of crashes in China.  The first few years I think I only crashed a couple of times.  The past couple haven’t been so lucky.  I am riding much quicker and the racing in China has become very competitive, as it is now somewhat of a feeder series to Moto2 and World Supersport.

In Part 2 of my ‘Crashing in China’ blog, I’ll get into specific detail about one crash and relay a few more crash stories that will remind you how lucky we are to have the safety amenities we have in Canada!