Injuries have kept Dan off a bike for most of 2016, but he remains in good spirits.

It is hard to believe another race season is almost behind us. 2016 is definitely a year for me to forget in terms of racing. It started off strong back in January where I won an endurance race over in China. I was in good form and had a big year planned with both my BMW team on the roads in Europe and my Kawasaki Superbike team in Asia.

In March I was testing in China and had an electrical issue on the bike in the wet. I high-sided and broke my back pretty bad – T2, T3 and T4 vertebrae, along with my foot, and suffered yet another concussion. It was a crash that would eventually end my season and have me contemplating retirement. My summer was rough as I was not very mobile and my wife basically had the two babies and me to take care of. My sister was supposed to move out of the country and delayed her trip six months so she could move in with us and take care of me as well. Thank goodness for family!

I finally recovered enough to start training in early September but, as bad luck would have it, I ended up breaking my wrist in four places and woke up with a titanium plate and 10 screws in my wrist. It has since mostly healed but unfortunately, there is a further break on the other side of the wrist and it will need a single screw, which will further delay my full recovery. That surgery will take place in December. 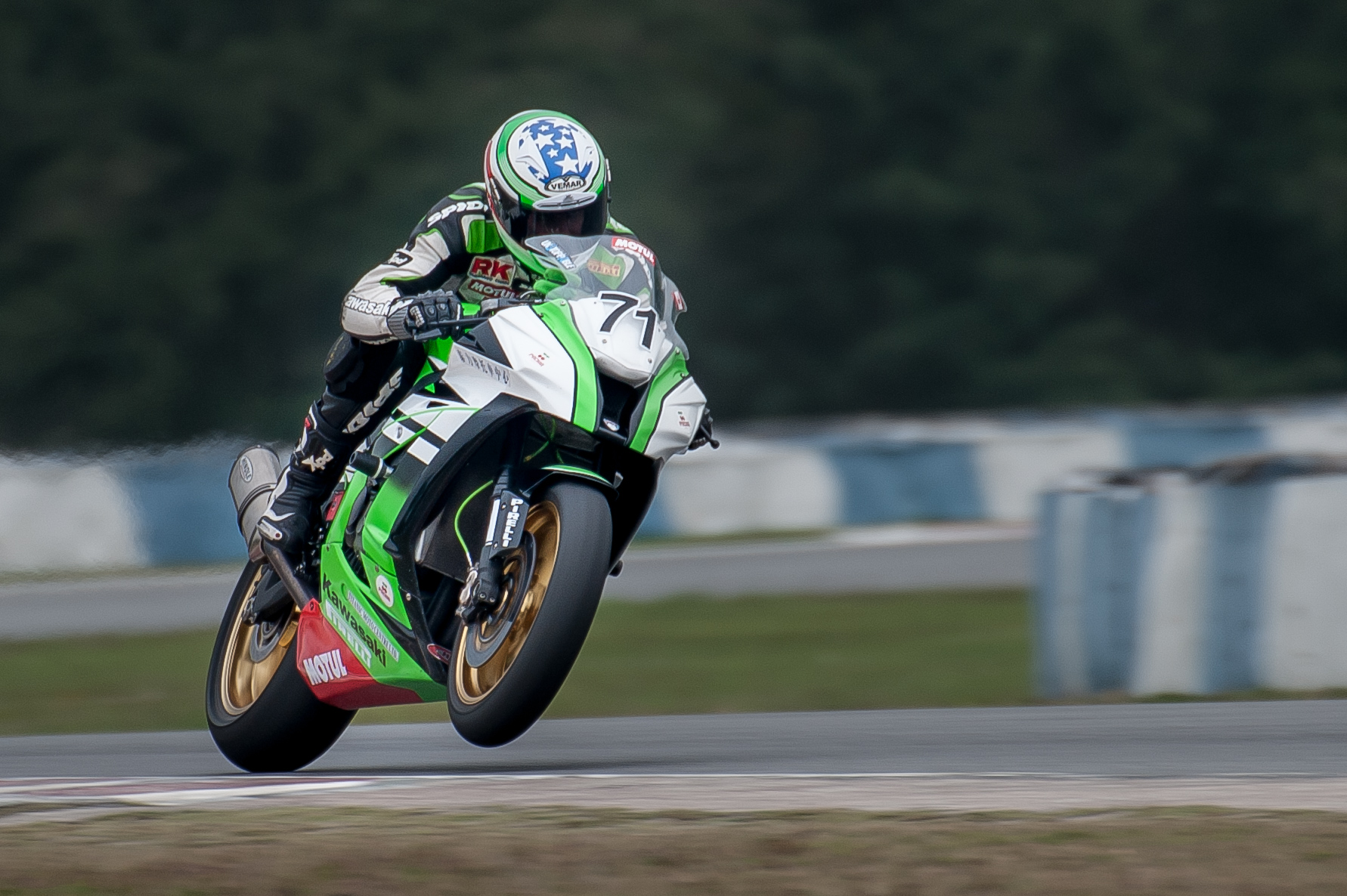 Kruger’s year started off strong with an endurance race win in China.

In September I invited top Japanese racer Masahiro Shinjo to China to race my Kawasaki Superbike in the final two rounds of the Pan Delta China Superbike Championship. We ended up have a great time together and he managed a 4th place in race 2 after overcoming a massive high-side in race 1, crashing out in his own oil due to a mechanical issue. It was tough watching someone else ride my bikes, especially on my home track, but it was pretty cool seeing my team working alongside the Japanese RS-Itoh team as they rebuilt my bike from scratch through the night.

Also in September I was asked to run an advanced race school in China for BG Performance, the largest and longest-running race shop in Hong Kong/mainland China. BG was the company that initially gave me a ride in China six years ago. We have always remained friendly and they help me from time to time with parts and support when needed. I like teaching schools and it fit into my schedule, so I jumped at the chance. Unfortunately, I had just had surgery on my wrist and had a cast on, so I asked a Japanese rider named Shinjo to stay behind after the races and do the riding for the school while I focused on the classroom lessons, track walk and analyzed each rider as they were on track. We had some nice dinners and good times. I agreed to be the lead rider at his January school, also in China, which should have a big turnout.

In November I flew over to Hong Kong for a day to represent Kawasaki at the annual Hong Kong Motorcycle Show. In total, I flew 42 hours to be in Hong Kong for 24 hours. I spent about four hours at the show signing posters and meeting fans. I was cranked up on Starbucks to stay awake, but fought exhaustion the entire day. It was a great day as I really enjoy meeting everyone; they are great fans and big motorcycle enthusiasts.

I am on a flight to Macau as I write this for the Macau Grand Prix. I have put Dan Hegarty from the UK on my Superbike for this race. He is having an amazing year and was top privateer this year at the Isle of Man TT. I have a feeling he will get on quite well with the challenging Macau circuit. Moto3 World Championship racer Danny Webb is also testing my bike, as we might form a team together for 2017 to take on the China Superbike Championship. I will also test a bike next week, and that will be a telling sign on how well my recovery is going and might shed some light as to my future.

I am ready to hit the gym and have my trainer ready to put me through boot camp. Kawasaki has two new 2017 ZX-10RRs coming in for my team, and we will keep a 2016 bike as a spare. Hindle has already signed on for yet another year. In fact, all the team’s sponsors have agreed to re-sign for 2017, which is proof that there is loyalty in racing (much to contrary belief). The big question now is if I will race or put someone else on the bikes. Only time will tell… I also need to finalize my plans, if any, with BMW for the roads in 2017.

I’ve got lots to think about in the coming months, but the main focus is on getting fit again and spending as much time with my family as possible over the winter.

Merry Christmas to everyone, thanks for reading my blogs, and I hope I am keeping the stories interesting for everyone. See you all in 2017.