The 2021 FIM North American Road Racing Championship – known as MotoAmerica – opened its season with two races for the featured Honos Superbike class at Michelin Raceway Road Atlanta, May 1 and 2. Yamaha continued to impress in the Pro Superbike category, with a win each for their satellite program and the current works-supported squad.

However, popular 28-year-old Californian Beaubier headed to the World stage for 2021 and is now learning the ropes with a Triumph triple-powered Moto2 machine. Meanwhile, his formerly out-raced American competitors are looking forward to a National tour without the reigning champ.

The obvious favorite for the crown should be Jake Gagne, Beaubier’s team-mate from last year, now leading the Attack effort. Gagne, 27, has career experience similar to Beaubier, but so far without even one win in the top class of MotoAmerica.

Joining Gagne at Attack is Josh Herrin, the AMA Superbike Champ for Yamaha in 2013. Herrin then made an abortive attempt at Moto2, and since has been trying to get his career back on track, with varying degrees of success.

Herrin rode for Attack and impressed in 2018, and most recently had a disappointing run on the Steve Scheibe BMW S1000RR. Now back at Attack, much is expected of the hard-charging Herrin.

Off-season developments suggested that the real favourite for the 2021 ‘Number 1’ MotoAmerica plate could be a rookie Frenchman on an exotic Ducati V4 R. Loris Baz was once a rival of Canada’s own Brett McCormick when both were climbing the World Superbike ladder, in 2012.

Baz soon joined the factory Kawasaki effort, winning races and then heading to MotoGP with Yamaha, Ducati and KTM.

This will be a challenge, since Baz doesn’t know the circuits and is new the current spec Dunlops (MotoA), having raced on Michelins (MotoGP) and Pirellis (WSBK) in recent seasons.

Another team with a solid reputation is the M4 Ecstar Suzuki program of Team Hammer, the racing name for the Ulrich family. Last year, M4 took over the works Yoshimura program for Suzuki, and after a rough start, showed well with former MotoAmerica Champ Toni Elias (2017) and rising star Bobby Fong.

The second Suzuki seat was the focus of several American riders’ hopes, but most insiders think Petersen deserved the ride on merit. So, it will be up to the 25-year-old from South African to make the most of this potentially break-through ride.

At Road Atlanta, one rider not mentioned in the paragraphs above climbed back to prominence, returning to action after a severe injury cut short his 2020 campaign. 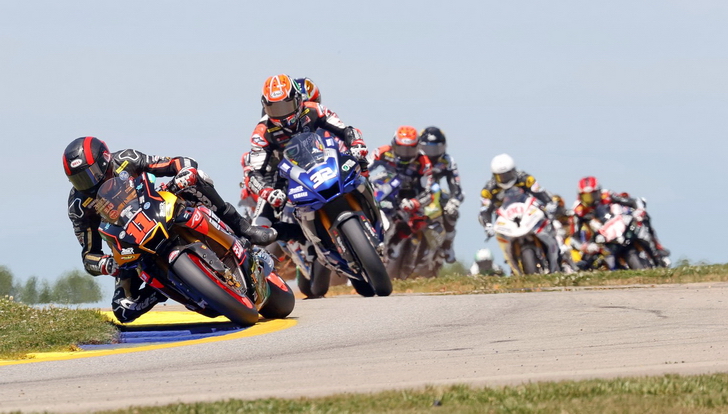 Matthew Scholtz, also South African, rides a satellite Yamaha for the Westby squad, and has won twice – COTA 2017 and Barber 2018 – both times in the rain. In Race 1 one at Atlanta, Scholtz led all but one of the 19 laps, winding up three seconds clear of runner-up Fong. Herrin was a long way back for third.

Gagne qualified first but suffered an engine issue early while leading. Baz worked his way into the lead, only to get into trouble battling Scholtz for first, sliding off after running way wide in the last Chicane, late in the race.

“He kind of knew I was coming,” explained Scholtz of the incident fighting Baz. “He let go of the brakes, and so did I. Unfortunately, the track turns up there, and I think we both might have tried to use the space, running pretty wide, and it gets slippery. I got off the start line good for once, and that gave me some confidence.”

On Sunday, Race 2 opened with a good dice up front between Gagne, Scholtz and Fong. Unfortunately, Fong had to serve a pit lane ‘ride through’ for anticipating the start, although amazingly he managed to make it all the way up to fifth at the finish. Fong’s race pace suggested he could contend for victory. 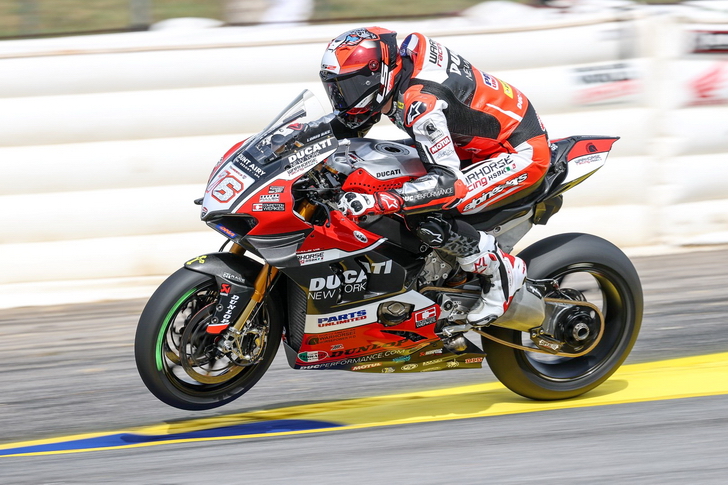 CUTLINE: The pre-season favourite in MotoAmerica was veteran Loris Baz of France on the Warhorse HSBK Ducati New York Panigale, but the series opener at Road Atlanta did not go well for the series rookie and former World Superbike winner. Image by Brian J Nelson / Courtesy MotoAmerica.

Baz was up to third by mid-race, but then suffered a lengthy pit stop when his shift linkage fell apart. The exotic Ducati’s pace is real, but now Baz will have to play catch up in the points standings for much of 2021.

“I knew I had to get off to a good start,” explained an elated Gagne. “Scholtz and Fong were good to go. I tried so hard to get a good start, I slipped and slipped the clutch. Luckily, from my experience last year, I knew how to adjust the clutch! Once I got the clutch dialed in, I knew this bike would just keep rolling.”

Next race on the MotoAmerica schedule is Virginia International, May 21-23, followed by Elkhart Lake on June 11-13.

BMW Motorrad Motorsport enters the crucial phase of preparations ahead of the 2021 WorldSBK.