Colin Fraser: MotoGP Back in Europe with Yamaha Still On Top

Round three of the 2021 MotoGP World Championship took place in Portimao April 18, with the Grande Premio 888 de Portugal. Monster Energy Yamaha’s Fabio Quartararo worked his way to the front early after a poor start to score his second win of the new season.

Polesitter Quartararo now leads the Championship chase with 61, followed by Bagnaia at 46 points and first round victor Maverick Vinales (a discouraged 11th) on the second works Yamaha in third with a total of 41.

Points leader after Round 2, Johann Zarco, is now fourth, at 40, due to a tumble in Portugal.

Now the Petronas squad is regrouping, Vinales once again has issues, and Quartararo has confirmed the strong pace he has frequently shown in the past two years.

The race featured a fair amount of attrition among the front runners, starting with troubled pre-season favourite Jack Miller falling in Turn 1 on the sixth of 25 laps. After that, early leader Zarco (Pramac Ducati) fell with six laps to go and the second works Suzuki of Alex Rins also exited the front-line dispute.

“We know now what we have to do to be competitive,” explained Quartararo, referring to Yamaha’s troubled, up-and-down season in 2020. “As long as I have a good feeling with the front, I’m going fast. In today’s race, I just focused on my riding – but what a pace!

“I was just half a second from my qualifying lap (time), so that was amazing,” continued the victor after his third race for the ‘A’ works squad. “I felt pressure from Rins coming up behind me, but then he made a mistake. I was riding well and easy, and I was still able to keep a gap to Bagnaia, so I was so happy.”

For Bagnaia, starting 11th, his goal was to “finish in the top five – but instead, I managed to get on the podium! This was a track where I struggled a lot of last season, but this year, my feeling with the bike was incredible. In the end, I was suffering a lot (with tire wear), but I was able to defend second place from all of Mir’s attacks.” 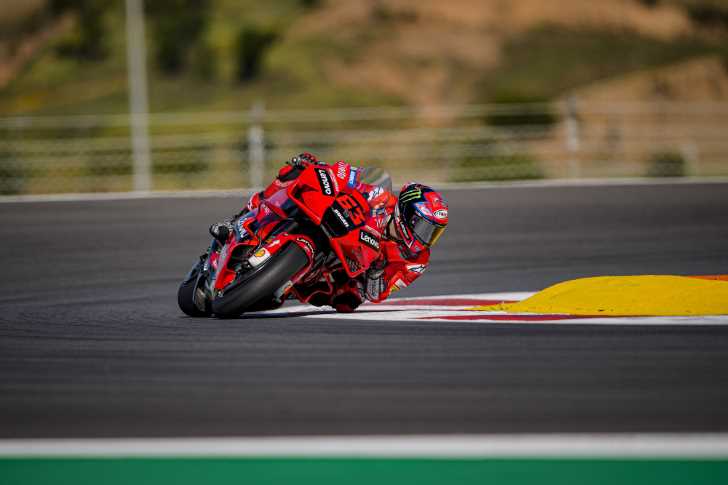 Both Suzukis were up front from the start in Portugal, suggesting the chance to stage a dominant performance. Rins was certainly charging, trading fastest laps with Quartararo, but once again Rins seemed to suffer a loss of focus when a top result seemed likely.

Mir “didn’t expect to have trouble in the middle of the race, after qualifying and the start showed we were so strong. We started to struggle with the front of the bike, and that is something we have to check and learn from. But overall, I’m happy to manage a Podium at a track that isn’t the best for me.”

Miller was racing just 12 days after arm-pump surgery and admitted, “I only have myself to blame, the crash was completely my fault. Quartararo had just gone by me and we all know the kind of pace he had all weekend, and I had to knuckle down and go with him if I wanted a big haul of points.”

Miller’s recently repaired arm will require further medical attention this week, but the Australian hopes to be able to ride his bicycle, if not motocross bike, before the next round at Jerez, in Spain.

Focal point of the weekend was Honda’s Marc Marquez, back from last year’s injury dramas and looking almost as fast as usual. The eight-time World Champ made a lightning start from sixth and got as high as third, but a series of small errors dropped him to the back of the top ten. Attrition allowed him to earn seventh – top Honda – just in front of brother Alex on the LCR Castrol Honda entry.

“I didn’t enjoy the race today, I suffered a lot,” admitted Marc M. “But this is the most important step in my recovery so far. My position didn’t matter so much but to finish just 13 seconds behind first place seemed like an impossible dream. The start of the race was a bit of a shock after so long! The last few laps were just about finishing.”

Valentino Rossi thought a top ten result might be possible on the second Petronas Yamaha but crashed mid-race. His team-mate and protégé Franco Morbidelli was a good fourth, explaining, “the race was really food after our troubles in Qatar, and I was able to fight my way up from the beginning and battle for a podium place.”

Last year, KTM won in Portugal with local hero Miguel Oliveira, but he fell and remounted for 16th, just out of the points.

However, the second Red Bull KTM of Brad Binder worked up to a solid fifth, pressing late, saying, “I really thought, with five laps to go, we had a shot at a podium today. I’m happy to get our first top five of the season.”

Also confirming improved recent form was Aleix Espargaro, sixth on the Gresini Aprilia. “I am having more fun than ever in the saddle,” laughed Espargaro post-race. “We have been part of the lead group for three races in a row, with speed and without mistakes. I’m stoked to get back on track and see what we can do next.” 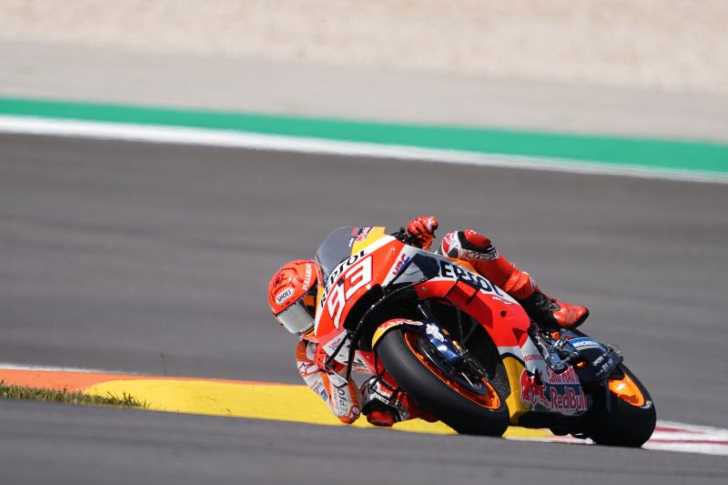 PHOTO: Marc Marquez made his first MotoGP start of 2021 for Repsol-Honda and was happy to net seventh as he recovers from multiple arm surgeries. CREDIT: Honda Racing Corporation