Colin Fraser: Marquez back on top … and it only took 581 days!

After a lengthy lay off and recovery, Repsol-Honda’s Marc Marquez was finally back on form at his favorite MotoGP venue in Germany.

Honestly, I figured I would be writing a blog about the victorious return of MotoGP legend Marc Marquez earlier than yesterday’s 8th 2021 round, the Liqui Moly Grand Prix Deutschland. The 28-year-old, eight-time World Champ Marquez has been mostly out of action since the completion of his dominant 2019 season for the factory Repsol-Honda squad.

The last victory for Marquez came at Valencia at the end of the 2019 campaign, just 581 days ago. Almost two years later, the crowds are finally back and so is Marc.

First, Marquez had to get his “other shoulder” surgically repaired, ruling him out of the typical off-season 2019/2020 testing. Then he got hurt at the pandemic-delayed Jerez 2020 opener, seriously damaging his forearm.

It took three surgeries before he could rejoin the tour for 2021 race three, where his sore arm and still wonky shoulder were major issues – let alone the state of development of the top tier Honda RC 213V, seldom successful without Marquez.

At the Sachsenring on Sunday, at a venue where Marquez is the established king, he made a strong start from the second row, was bold in the first corners, and soon grabbed the lead.

Although his early season has been plagued by uncharacteristic gaffs and falls, this time it was vintage Marquez – get in front early, build a lead, and hold off the best of his challengers as tire degradation with the spec Micheline slicks becomes the crucial factor.

The success was an incredible 11th in a row for Marquez at the Sachsenring, with the last eight coming in the premier MotoGP category. Rain seemed likely to affect the race, and caused Marquez to push the pace early, possibly risking his tires if the threatening skies didn’t deliver.

However, it didn’t rain much, and no one opted to switch to their rain tire equipped second bike warming in pit lane. Instead, Miguel Oliveira on the Red Bull KTM got clear of a great battling pack and set off after the leading orange Honda.

For a while, it looked like Oliveira might get on terms with the leader, but with three laps left to go it became clear Marquez had the late race pace to claim the long-awaited comeback victory.

“This is one of the most important, and hardest, moments of my career,” confirmed an emotional Marquez post-race. “Today, I knew I had a great opportunity to do something. “When I saw some drops of rain on lap four or five, I knew it’s my race. I started pushing and when it started to rain harder, I pushed even more and then the second race with Oliveira began. He pushed hard and was very fast.”

“It was hard to keep concentrating because all these memories, everything I have lived over the last year, came into my mind. But we did it and we will do it again.”

“When I crossed the line, I just relaxed and enjoyed it,” continued the victor. “When I arrived at the Podium, with the whole team there, emotional, it helps a lot after such a difficult situation. It is impossible to come back alone, your need many people, a good team, a good team of doctors, physios, Honda – Honda respect me a lot. This is extra motivation for me, for Honda, for our engineers, for the team and now let’s see what our future brings.” 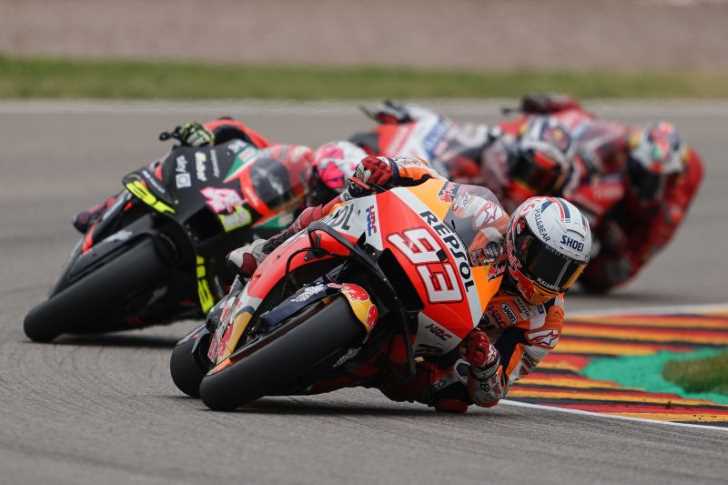 CUTLINE: After a lengthy lay off and recovery, Repsol-Honda’s Marc Marquez was finally back on form at his favorite MotoGP venue in Germany. Credit: Honda Racing Corporation

KTM’s Oliveira wound up 1.6 seconds back for an impressive second, his third podium in a row. Early in the race, he pushed decisively past Aleix Espargaro impressive Gresini Aprilia RS-GP and Ducati’s Jack Miller, just as the light rain began.

“I was not in the ideal situation because I was not at that moment right behind him,” explained Oliveira of leader Marquez. “I had been stuck in this little group as he built his gap. The I tried hard, I put the pressure on him, I did the best I could, but I didn’t have the best situation to manage the tire because I used it a lot to try and get to Marc.”

“I felt like Marquez was in control for the whole race,” reflected Oliveira. “He pushed a little bit more when I was completely empty. This made my race decisions easier as he pulled the gap back to 1.5 seconds. From there I decided to save second place.” 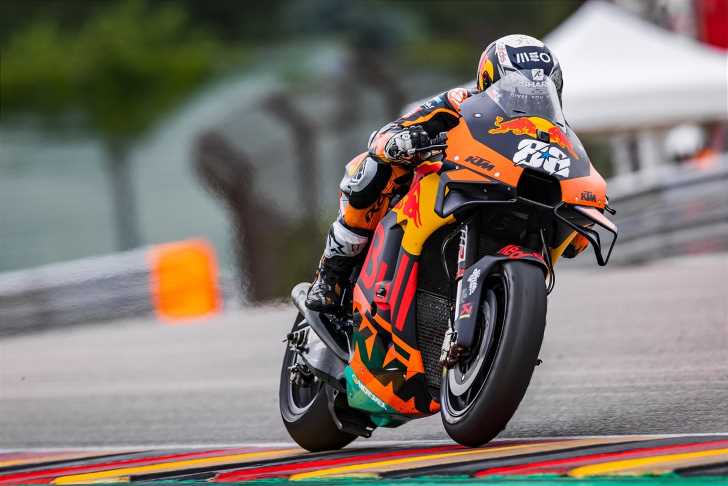 Commenting on the KTM’s building race pace, Oliveira explained that “in this tight category on this tight grid, if you are able to understand where you can extract the maximum of each detail, then you can make steps forward.”

“I think in the beginning of the Championship season, we couldn’t really understand how we could turn our situation around,” admitted Oliveira. “We relied a lot on parts that were coming from the test team, and I think we did very good group work.”

“We work with all four KTM riders, as well as Dani Pedrosa on the test team; he has been like an outsider but helping a lot and giving very valuable input into the project which is finding a little bit here and there.”

Monster Yamaha’s Fabio Quartararo extending his lead atop the 2021 points standings with a climb up to net third, having faded back as far as sixth place after starting from the front row.

“It was a really good day,” admitted Quartararo. “We knew we were going to struggle, and this is what happened in the race, in turn six/seven we were very slow. Our goal was to try to finish in front of the Ducatis and try to finish on the Podium, and we achieved this.”

Brad Binder made it a great day for KTM with fourth, while the top Ducati belonged to fifth Francesco Bagnaia after another come-from-behind ride. Miller netted sixth from Espargaro.

In the points standings, Quartararo leads with 131, Johann Zarco (a disappointing eighth in Germany on the Pramac Ducati) second at 109 and Miller third at 100 points. Next round up is Assen in the Netherlands, June 27.