On September 8th and 9th the Canadian Motorcycle Drag Racing Association wrapped up an incredibly successful 2012 season, brought to you by Parts Canada and Drag Specialties, which featured multiple new records and highly contested championships.

Excellent weather conditions at Edmonton’s Castrol Raceway brought out the largest spectator gallery of the year for the Season Finals presented by the Harley Davidson Dealers of Northern Alberta.

Consistent with tradition, the final round of the season was expanded to include the annual East vs. West showdown to determine the Canadian Champion in the Screamin’ Eagle V Rod Destroyer Series.  Deja Vu was the order of the day with Eastern Champion Peter Thomson lining up against Western Champion Nick Allen in repeat of the previous year’s final matchup. Despite an outstanding effort from Thomson, Nick Allen won the race and his sixth consecutive Canadian Championship.

2012 marked the return of fan favorite “Hyper” Al Miles and his Edmonton based FFR racing team to the top of the Screamin’ Eagle Pro Dragster class. Despite losing the second elimination round to event winner, Doug Casson of Fort Saskatchewan Alberta, by an unbelievably narrow margin of 0.007 seconds, Miles’ accumulated points gave the FFR team the 2012 championship. In addition to series trophy, at the annual awards banquet following round 7, Al was presented with the Trev Deeley Memorial Award in recognition of his many years of outstanding contribution to motorcycle drag racing in Canada. 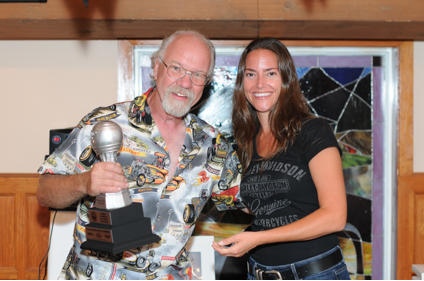 The season’s breakout Blackjacks Roadhouse Pro Mod series continued to provide thrills right to the end, as 2012 champion and current ET and MPH record holder Len Darnell raced 2011 champion Gary Christopher in the final elimination round for their last Nitrous vs. Turbo battle of the season. Despite Darnell running an ET 6.614 seconds, an RT of .081 handed the victory to Christopher who ran an ET of 6.643 seconds and an RT of 0.010. Seeing his chief mechanic and father Len Darnell Sr. presented with the Dave White “Wrench of the Year” Award later that evening topped off an amazing 2012 CMDRA season for Len and his entire team.

The Super Street championship came down to a final elimination round between Prince George BC’s Laurence Spranger and Rob Aston of Calgary Alberta. Spranger arrived in Edmonton trailing Aston and points leader Clayton Potter in the season standings, 46 points out of first. When equipment issues kept Potter from moving beyond the first elimination round, Laurence seized the opportunity and took the class championship by not only finishing first in Edmonton but also re-setting new ET and MPH records, which he set earlier in the season during round 5.

After wrapping up the Pro Street class championship during round 6, Ethan Barkley kept his winning streak alive and finished the season with a perfect record as the top qualifier and 1st place finisher in each of the 2012 rounds. Ethan was also honored at the banquet with the Dennis Mark Memorial Award for Outstanding Achievement.

2012 Screamin’ Eagle Top Fuel Champion Damian Cownden achieved the weekends quickest ET and fastest speed with a run of 6.541 seconds @ 219.72 mph in the final elimination round of his class.

Complete results for the Season Finals and all CMDRA events are available at: www.cmdra.com/2012-live-race-results/

Dorna Issues Statement on Circuit of the Americas

Dorna Issues Statement on Circuit of the Americas