Honda Canada’s Jodi Christie was in California’s high desert on Tuesday, April 2 attending the launch of the latest CBR600RR at the Chuckwalla Valley Raceway facility.  The 21-year-old from Peterborough, ON, the reigning two-time CSBK Pro Sport Bike national champion, was excited to be on track for the first time since the final 2012 CSBK national round at Canadian Tire Motorsport Park last August.

The 16 turn, 2.65 mile long Chuckwalla Valley venue is considered ideal for testing, and with few straightaways, is considered an ideal 600 class track.  Honda opted to stage their launch at Chuckwalla for that reason, and Christie was happy to join in for warm weather (90 degrees F), track time and a chance to visit with the assembled Canadian and American media.

The California-based American motorcycle industry uses this venue regularly for testing and development, and the fast pace at Chuckwalla is well-established.  Christie turned a best unofficial lap at 1:54.9, almost exactly the same time as the best ever lap turned by a Pro racer on a DOT-shod, full production street machine.  Christie used one set of DOT class rubber for the entire day.

Organizers prefer not to reveal the exact pace of testing with various manufacturers at this venue.  The best ever outright race lap however, set in full competition, is in the 1:47 range. 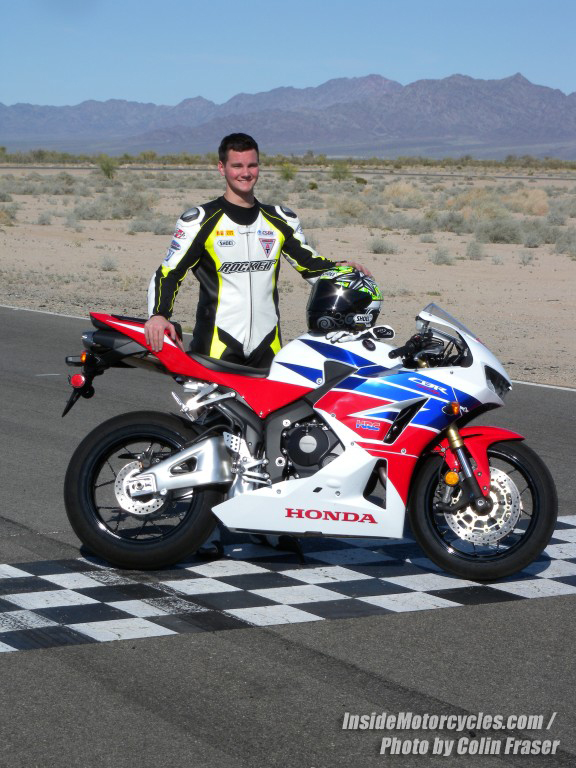 “Overall, it was one of the most fun tracks that I’ve ever ridden,” explained Christie post-test.  “I really enjoy the challenge of learning a new track, (with) such a technical layout.  I really loved the downhill switchback sections – the second one leads into a banked bowl – lots of fun, flowing corners.

“I was focused on putting together good, fast laps, but I wasn’t really aiming for a time,” continued Christie.  “My focus was on experiencing the new bike, getting a feel for the stock power delivery, and that performance should transfer well to the Canadian bikes built for our CSBK rules and tracks.”  Christie aims to earn his third straight Pro Sport Bike national crown aboard a CBR600RR in 2013.

Currently, Crew Chief John Sharrard is building Christie’s stable of new CBR600RR and CBR1000RR machinery at Accelerated Technologies outside of Peterborough.  The 600 is a new model for 2013, while the 1000 cc Superbike is familiar to Christie, who ran the “big bike” in the final national rounds of 2012 at Le Circuit Mont Tremblant in Quebec and CTMP in Ontario.

“My first impression of the new CBR600RR is that it’s a complete package,” the Honda ace reflected.  “Overall the bike gave great feedback, particularly given it was in completely stock form. “(The bike) had good feel from both ends, and I was impressed with the new ‘Big Piston’ fork.  We’ll make our usual upgrades, fit an Elka Shock and KTech pressurized drop-in cartridge, and start to sort out the race bikes when I get back to Canada – once it warms up!”

The upcoming Mopar CSBK season marks the first year that Christie will stage a focused assault on the premier Superbike crown.  “Honda has stepped up their support, so we’re heading into the season with two well-prepared Superbikes,” explained Christie.  “I’m aiming to finish on the podium. I want to contend for the win every weekend.  I think this is a realistic goal with the team and sponsors that we’re putting together.”

–By Colin Fraser, exclusive to Inside Motorcycles

Amateur Champ Daley Moves up to Pro for 2013