Sunny and hot 30+ degree weather greeted the riders at the Mecaglisse Circuit located an hour north of Montreal in the small town of Notre-Dame-de-la-Merci, Quebec. The event known as Supermoto X Fest marks round 3 of the Canadian National Supermoto Championship. X Fest is the highlight of Canadian Supermoto and draws the largest number of riders and spectators alike. Practice and heat races took place on the Saturday and the finals went down Sunday June 15.

The racing got off to a dramatic start with the SM1 Semi Pro class. When the first moto of two left the starting line Francois Asselin took an early lead. Coming into the 2nd corner, a tight right-hander Asselin pushed deep into the corner under braking. This allowed heat race winner Jerrett Bellamy to dart underneath Asselin to take the lead heading right into the large dirt table top. Asselin, attempting to regain the lead, grabbed a handful of throttle off the tabletop and came down colliding with Bellamy sending both riders to the ground. Since the 2 riders were at the front of the pack, this set off a chain reaction crash that claimed every rider in the crash. Needless to say the race was stopped and set to restart after a break to allow riders to fix their equipment.

Asselin wouldn’t rejoin the race due to injuries, Bellamy was also kept from competing with a broken bike and Steve Scharfe was forced to rejoin with his 250cc bike as his 450 was also badly damaged.

When the SM1 moto 1 was restarted it was Stephane Dupont who grabbed the holeshot with Sam Harris and Tommy Fortin in tow. After a couple laps Harris made his way around Dupont for the lead and took the win ahead of Dupont and Fortin.

The start in moto 2 was a repeat of moto 1 with Dupont out front followed by Harris and Fortin. When they exited the dirt section and came back into spectator view it was Harris who was leading. Dupont went down in the dirt section and fell to the back of the pack. Fortin stayed glued to the rear wheel of Harris and attempted a couple passes but wasn’t able to make one stick until the 3rd last corner on the final lap where he pulled beside Harris on the straight and made the pass on the brakes into the right hander. Dupont was able to make his way back to 4th. Fortin took the win over Harris and Marc Andre Veins. 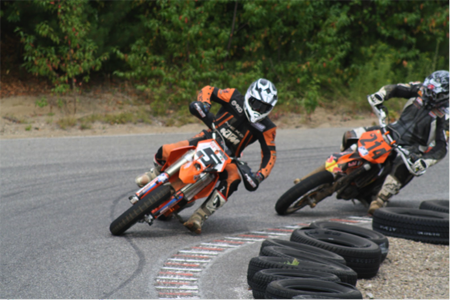 When the Novice class’ final began it was Jordan Lefebvre on his Kawasaki 250cc 2 stroke who jumped out to the early lead ahead of Eric Patterson and Robert Masse. In the dirt section Masse and Sylvain Simard would both make it around Patterson into 2nd and 3rd respectively. Simard came too hot into a pavement corner and ran deep allowing Patterson and Serge Benoit to slip by. By this point Lefebvre had opened up a huge lead over Masse. Simard raced his way back into 3rd ahead of Benoit. Late in the race Karim Guillemette tried to make a pass on Patterson for 5th place on the brakes heading into a left pavement corner but grabbed a bit too much and low sided. Lefebvre took an easy win over Masse and Simard.

Steve Scharfe took the holeshot in the SM2 250cc class ahead of Mathieu Gagne and Samuel Benoit. Heading in to the 2nd corner Gagne looked to the inside of Scharfe but didn’t have any room to pass, locked up his brakes and nearly high sided. This set him back a couple spots and Philippe Landry moved into 3rd. Coming out of the dirt section Gagne had moved back to 2nd but got a little aggressive on the dirty pavement and low sided dropping to the back of the pack. Out front Scharfe had a healthy lead and over Samuel Benoit and Landry who were battling it out for position. Gagne made his way around Jean-Philippe Benoit for 4th and set his sights on the battle for 2nd. Gagne would make it a 3 way battle for 2nd but wasn’t able to get past Landry or Benoit. Scharfe finished the race out in 1st ahead of Samuel Benoit and Landry.

When the Open Amateur class left the line it was Frederic Belanger who led into the dirt section ahead of Jordan Lefebvre and Stephane Dupont. In the dirt section Dupont made his way around both riders to take the lead.  Belanger would get back past Dupont when he made a pass by going around the outside of Dupont in a left hand pavement corner. Belanger would go on to take the win over Dupont and Lefebvre. 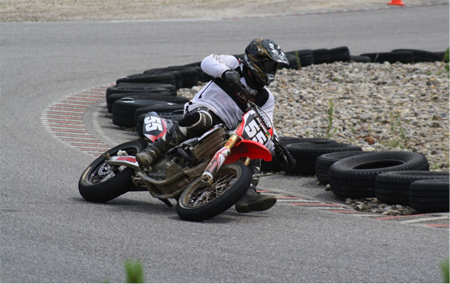 Tommy Fortin took the early lead in the Veteran 35+ race ahead of Frederic Belanger and Albert Cule. Belanger would then go down in the dirt section falling back to 6th place. Belanger would remount a charge and make a pass on Fowler in the left hand paved corner by the spectators to regain 2nd place. More action in the dirt for Belanger as he would go down again, this time ripping off his front brake master cylinder reservoir. Without a front brake Belanger was forced to slow down finishing 4th. Alex Csepe made a pass on Cule to take 3rd place. Fortin took an easy win over Fowler and Csepe.

The Mecaglisse team brought in 4x World Supermoto Champion Boris Chambon to teach a school the Friday before the races and to stick around and race the best Supermoto riders in Canada. It was a treat for all those in attendance to watch Chambon ride. He was extremely fast and smooth as glass on the paved sections. After the lunch break on Sunday the event promoter organized a Supermoto Drift competition for the riders to strut their stuff. Most of the riders were backing in nice slides into the corner but not Chambon. He came into the corner, pitched it sideways, then at the apex of the corner got on the gas, power slid out of the corner and then popped up into a wheelie while looking at the crowd on the exit. Needless to say he won the drift competition.

In the first Pro moto, Chambon took the win ahead of Michael Martel and Paul J. Rouillard. 2011 Canadian Champion Maxime Sylvestre had some issues with his shifter and had to ride the moto out stuck in high gear.

In the second moto, Sylvestre, with a repaired bike, grabbed the holeshot over Chambon and Martel. Sylvestre would gap Chambon slightly in the dirt but Chambon would reel him right back in on the pavement. In the left hand drift corner, Sylvestre pushed a little deep into the corner, just enough for Chambon to slide through into the lead. The next lap Sylvestre would pass Chambon coming back onto the pavement from the dirt but Chambon would retaliate maintaining his lead on the exit of the next corner. As the front 2 rider diced it out Martel stayed close in 3rd. The next lap in the dirt section, out of spectator view, Sylvestre would exit with Chambon nowhere in sight as he went down in the dirt falling to the back of the pack. Martel pressed Sylvestre for a couple laps before settling for 2nd knowing that would be good enough to take the overall victory. Chambon would race back getting past Chris Barendregt for 5th. Rouillard maintained his 3rd place position ahead of Andy Cule. 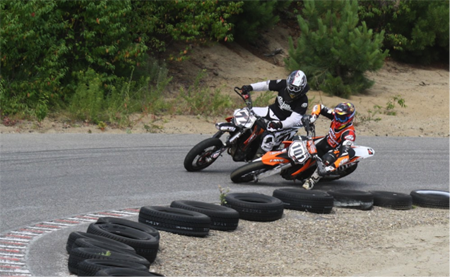 Martel’s consistent 2-2 finishes gave him the overall victory on the day. This marked Martel’s first pro victory and he celebrated atop the podium with the champagne spray and a huge smile. Sylvestre’s 1st moto mechanical problems cost him the overall victory finishing 2nd overall. Rouillard also rode 2 solid motos placing him 3rd in each and 3rd overall. Chambon scored 4th overall and Cule 5th. 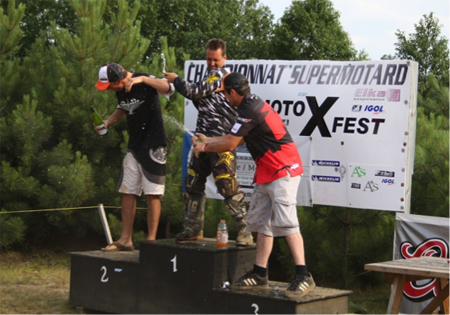 Dany Fiset took the win in the Pro Superquads ahead of Mathieu Robitaille and Mikael Lanthier in 2nd and 3rd respectively.

The next round of the Canadian National Championship will be the H Games event which will take place Saturday August 25 in Carignan, Quebec. This is another event that always draws a large number of spectators and will definitely be an event not to miss.

The National series will end at the Shannonville Motorsports Park in Shannonville, Ontario September 15-16. Championship awards will follow the racing on the Sunday.