by Graeme Jones
in News
0

Two of Canada’s most recognized drag racers will be competing in what is being touted as the biggest motorcycle drag race in the world, the Haltech World Finals at South Georgia Motorsports Park (SGMP) on November 9-11. Ethan Barkley, Canada’s most successful Pro Street racer and Terry Schweigert, Canada’s fastest 1/8 mile Pro Extreme Motorcycle competitor, are both headed to Valdosta, GA for the final round of the 2012 Manufacturers Cup drag racing series.

Clayton Potter, a CMDRA Street ET and Super Street competitor, is heading down with Barkley as well. Len Darnell, a longtime CMDRA racer out of Washington and an honourary Canadian, will also do battle. CMDRA Pro Street competitor Rob Aston is also entertaining the idea of attending, and more Canadians may be expected to join the party. 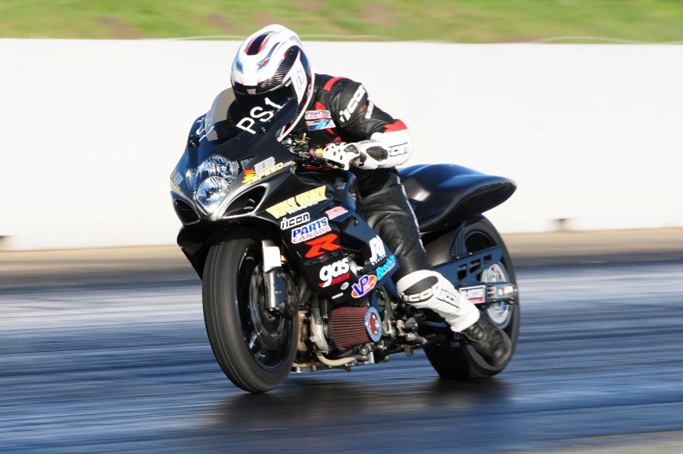 “I’m truly proud to represent Canada on the world stage at the largest motorcycle drag racing event ever,” said Barkley, who hails from Calgary, AB. “I’m so pumped to see what my EB Speed / Walt Healy Motorsports GSX-R1000 can do on a pristine track surface. I’m hopeful I can set new personal bests and go rounds against the best racers in the world.” Barkley pilots a turbocharged GSX-R1000 dubbed ‘Eleanor’ that has been as quick as 7.50 seconds at over 194 mph in the quarter-mile. Follow his Twitter feed @ethanbarkley for updates of the 9,000 km road trip and racing action as it happens, from the racer’s perspective.

Meanwhile, Schweigert will be converting his nitrous-injected DTM Performance Suzuki Hayabusa to a quarter mile setup for the World Finals to compete in the new Pro Nitrous class.The Abbotsford, BC eighth mile ace finished second in the world in the American Drag Racing League PXM class in 2011 before running a limited schedule in 2012. He reached the finals at the ADRL Ohio Summit Drags in October.

“We have a fresh motor in the bike and two on the floor, and with the ADRL weight limit and Dan the Man tuning, we will be flying,” said an excited Schweigert in reference to his crew chief Dan Wagner, who was also the key organizer of the Pro Nitrous class being included in the World Finals. “I love quarter mile racing and its been so long – Atlanta in 2010 – since I last ran the quarter mile. To say the least, I’m excited!”

Schweigert is no stranger to the quarter mile, having competed in the CMDRA’s Pro Modified class for many years before heading south for the ADRL and its eighth mile series.