Canada Post celebrates freedom, adventure and speed, with the release of the first two Permanent™ domestic rate stamps in a set dedicated to Canadian motorcycle manufacturing and design. The two stamps travel back to the turn of the century, when out of the desire to merge the flexibility of bicycles with the speed of cars the first motorcycles were created. The stamps showcase two early models, the CCM 1908 Lightweight Motor Cycle and the 1914 Indian.

“When motorcycles first captured the imagination of adventurers, Canada’s entrepreneurs, designers and manufacturers were there,” says Jim Phillips, director of Stamp Services at Canada Post. “These stamps pay tribute to the excitement of those early days.”

In the early 1900s, while developing its bicycle and hockey skate businesses (which now operate as distinct entities), the Canada Cycle and Motor Company became the first company to step into the emerging motorcycle market in Canada. The company created only a few models, and the 1908 was among its first. CCM used a Swiss-designed engine that could be attached to any conventional bike frame.

Famed for its ability to engineer speed on two wheels, Indian Motorcycle Company – then called Hendee Manufacturing Co. – was an early commercially successful motorcycle maker. Based in Springfield, Massachusetts, it opened a plant on Toronto’s Mercer Street in 1912. The Indian became the bike of choice for Canadian racer “Wild Joe” Baribeau, who rode it to provincial and national racing championships. The bike’s racing success triggered a boom in demand from North American police departments, as well as military units. 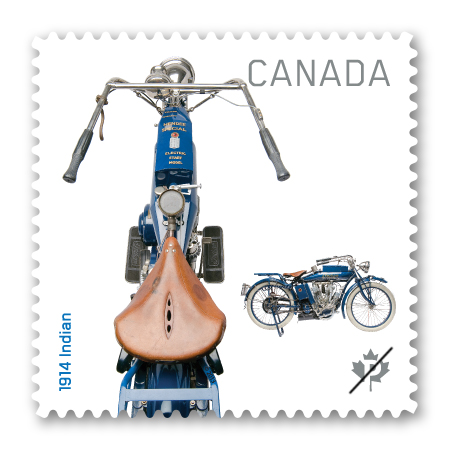 The stamps each showcase two views of their motorcycle: the top view from the perspective of the rider and a profile. The designer also honours the Indian’s military legacy by featuring a postmark based on a famous World War II poster.

The stamps are available at Canada Post counters across Canada, and at canadapost.ca/shop.

The stamps measure 32 mm x 32 mm (square) with simulated perforations, while the souvenir sheet measures 115 mm x 83 mm and has 13 + perforations. They are printed by Canadian Bank Note Company on Tullis Russell paper using lithography in five colours. The stamps are pressure sensitive. The Official First Day Cover will be cancelled in Port Dover, Ontario. The stamps are available in booklets of 10. Souvenir sheets and framed enlargements are also available.