I first met Tony at Shannonville Motorsports Park in 2005 when I started getting involved with racing. Tony’s son Simon was one of the quicker amateur racers on his Kawasaki ZX-6R and both father and son always seemed extremely friendly and approachable. When they weren’t working on Simon’s motorcycle, the duo were off helping other riders around the paddock, whether it was fixing broken parts or offering up tips on how to go faster. At the time, they seemed like a typical father-son pair who enjoyed spending time together at the racetrack. Little did I know that a few short years later, Tony would become one of the best suppliers of motorcycle and racing parts and accessories in Canada. As it turns out, Tony (nor his wife) were expecting as much either. After an early career in motorcycling, Tony Blue immigrated to Canada during the 1970’s, promising his wife to leave motorcycle racing behind forever.  As it turns out, with a long history of motorcycling under his belt, you can’t take the man away from the sport. 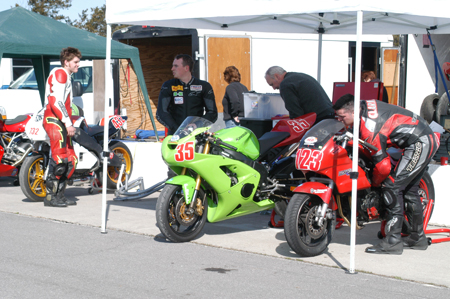 Tony Blue got his first motorcycle when he was fifteen years old and living in England, by the time he was sixteen he was racing.  Before long, he became a test rider and development engineer for Norton. Riding and racing was in his blood.  He eventually went on to start a Dunlop tire service in the U.K., and eventually opened his own dealership. Somewhere along the way he met his wife, Pamela, and the pair eventually decided to move to Canada, where Tony promised he would leave motorcycles behind forever. 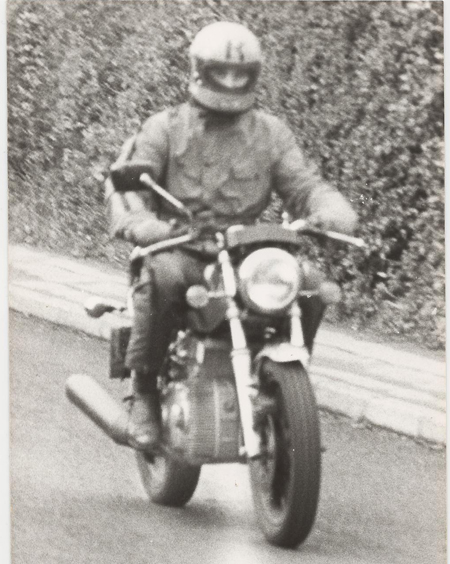 Tony found a job with a local manufacturing company and set out to build a solid foundation for his wife and family. While he missed motorcycles, his life was running along more or less smoothly, until one-day son Simon arrived home from a trip to England, with a new found interest in motorcycle racing fresh on his mind. Simon had spent much of his visit to England watching motorcycle racing, so when he arrived home he announced to his father, “Dad, I gotta race!” The younger Blue was about 21 years old at the time and Tony’s initial reaction was to discourage his son from racing. “For the reasons we all know,” explained Tony, who was referencing the costs and risks associated with racing, “I didn’t really want him to race.” However Simon insisted, “Are you going to help me or not?” According to Tony, he thought it was better to help his son than let him go it alone.

The two quickly set out to purchase a Kawasaki EX250 so that Simon could learn to ride. Simon mastered the EX250 and quickly became comfortable enough to transition to the racetrack. It wasn’t long before he outgrew the EX250 and graduated to larger motorcycles, such as a Kawasaki Ninja ZX-6R. By 2005 Simon was racing his first National Canadian Superbike series, and was one of the front-runners in the competitive Amateur 600 class, with help from dad every weekend along the way.

To assist Simon’s racing efforts, Tony began to contact some old friends back home in England for product support and sponsorship to help offset the cost of racing. One such supporter was Micron exhaust, based out of England. Simon was one of the few riders in the paddock running the Micron system, and yet his performance on the racetrack did not go un-noticed. Pretty soon others were beginning to inquire about this relatively unknown exhaust company from England. 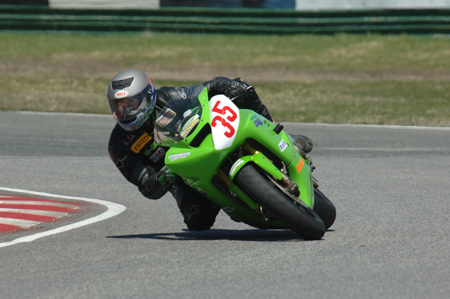 After a successful Amateur national racing season, Simon would eventually achieve graduate to the Pro ranks and began to focus more on local, regional races as opposed to the National series, which required a great deal of time and travel. With Simon no longer travelling across the country to compete, Tony found himself with more time on his hands to grow Blue Streak Racing.

“We’ve added onto the garage quite a few times now,” mused Tony, who eventually quit his day job to pursue Blue Streak Racing on a full-time basis.  When asked what his wife Pamela thought of Tony breaking his promise to leave motorcycles behind, he explained that she is actually very supportive of the move. “She knew that I wasn’t happy in my day job,” Tony elaborated, “We knew I had to do something and this made the most sense. Things have been really great every since and the business is growing to the point where I need to hire someone.” 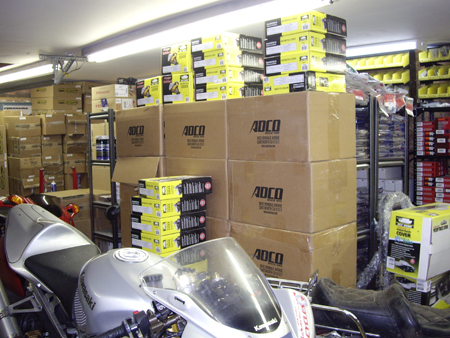 Both Simon and his sister, Leah, continue to be involved in the family business, and while Simon now lives and works in Montreal, he continues to help his father at local trade shows in the wintertime.

In a few short years, Blue Streak Racing has expanded from a small distribution business catering to racers, to a full-fledged supplier of motorcycle parts and accessories for both racers and street riding enthusiasts alike.  According to Tony, “while racers were initially the core of our business, street riders have easily become a large portion of his business today.” Blue Streak Racing continues to remain in touch with their racing roots, and sponsors a number of local racers including 2011 Canadian Pro Sportbike Champion Jodi Christie, up and comer Aubrey Bailey, and Inside Motorcycles’ own contributor Steve Hoffarth. 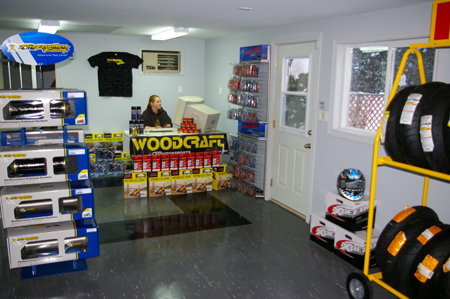 While the day-to-day operations of Blue Streak Racing keep him quite busy, Tony still manages to get out for 2-3 track days a year on his Ducati 999 sportbike.  It seems that once a motorcyclist, always a motorcyclist. Lucky for us Canadians that Tony Blue chose Canada as him home and brought his passion and experience with motorcycles along with him.

For more information about Blue Streak Racing and the products they carry visit www.bluestreakracing.ca