Aprilia Sweeps ‘ring round one as McCormick Earns First Point

Aprilia Sweeps the podium in round twelve

Aprilia team leader Max Biaggi, normally known as the “Roman Emperor”, was “Maximum Max” at the opening race of round twelve of the eni Superbike World Championship at the Nürburgringin Germany.  In hot and slippery conditions, Aprilia made history with their first podium sweep in World SBK class action.

Fast Canuck Brett McCormick had a strong return to action from injury in his rookie Superbike season, earning his first Championship point with a 15th place finish on the Team Effenbert Liberty Racing Ducati 1098R.  McCormick ran hard early but encountered set-up issues, and planned to make changes in time for the second series race this afternoon.

Pole sitter Biaggi, piloting the lead Aprilia RSV4 Factory, battled with Tom Sykes for the lead in the early going, then took control mid-way through the 20 lap opening race when Kawasaki ZX-10R mounted Sykes began to experience rear tire issues.  From there Biaggi swept to a clear, 3 second win, taking the points lead in the fight for the 2012 Superbike World crown. 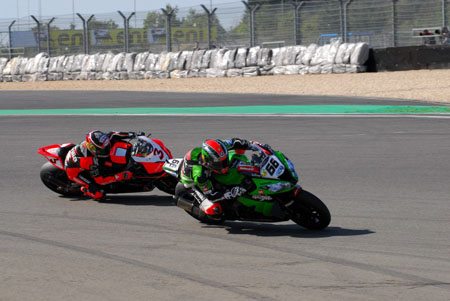 The fight for second was a solid tussle, with Biaggi’s Team-mate Eugene Laverty going at it for most of the race with the privateer ParkinGO Aprilia of class rookie Chaz Davies.  At the chequered flag, Laverty edged Davies by exactly one tenth of a second in the drafting war to the line.

Sykes soldiered on to earn fourth, almost ten seconds back from the second spot dispute, having set the pace in the early going.  In the points chase, Biaggi is now first with a total of 315, followed by Marco Melandri at 308.5 and Sykes with 280.5 points.  % races remain in the 27 race series.

BMW Motorrad S1000RR mounted Melandri was running near the front when he fell in the early going, the Italian former series leader uninjured but his machine badly damaged.  His crew were busy rebuilding his bike in preparation for the second 20 lap counter.

Other notable fallers included reigning World Champ Carlos Checa, who tumbled from his Althea Ducati while battling with the factory Ten Kate Honda of Jonathan Rea.  Checa remounted to charge through the pack, winding up just inside the points with 12th spot, but seriously damaging his chances in for his already long shot at retaining the title. Fellow favorite Rea also fell early in the race.  The second works Kawasaki of teenager Loris Baz had moved through the pack and was running fifth when he lost the front end with three laps to go.

McCormick stayed out of trouble in the opening laps, moving into the points paying positions by the end of the first lap, battling with the likes of Suzuki mounted ace John Hopkins.  By mid-race, his pace had slowed somewhat, as was common in the difficult conditions, and he ended up battling new Effenbert Beer-backed team-mate Lorenzo Lanzi.  Veteran Lanzi wound up 14th, less than two seconds clear of McCormick at the finish. 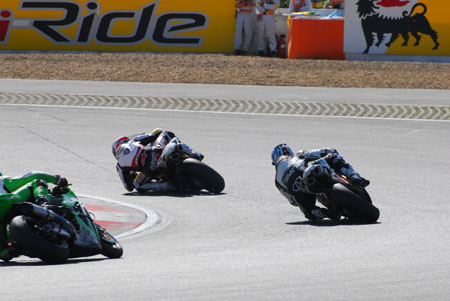 “The rear tire was what we expected it to be, not too bad, lasted maybe seven decent laps,” confirmed McCormick.  “Then it started to go off.  Honestly, I was pushing too hard at the start, but later I got into an easier rhythm, I got it going a little better at the end.”

“For the race this afternoon, we’ll go softer on the rear and harder on the front.  I’m still not that happy with the front end feel.  I was holding off Lanzi for a long time, but then Checa went by at the same time as Lanzi, and that screwed up my pace for a bit.  It took two laps to get things back the way they should be.”

Overall, everyone involved in the McCormick program was pleased that the 21 year-old earned his first World Championship point in his third weekend as part of the World SBK series.  “Honestly, the race could go better, I think I’m maybe one second per lap off the pace I should be at,” explained McCormick.  “I’m not happy about that, I know I am capable of more, but finally I’m back with my team, on the bike – these three days in a row riding have been a great start.”

Asked about the warm conditions, McCormick laughed that “I’m really sweaty, I’m the sweatiest!  It was dripping into my eyes the last few laps; I guess I need a haircut!”

McCormick planned to check his on-board race data with the team and head to the medical unit for a massage prior to the second German SBK round slated for 3:30 PM Local time.