McCormick fared quite well in his first weekend of WSBK competition

20-year-old Brett McCormick of Saskatoon, SK earned his second straight 16thplace finish in race two of his debut outing in the 2012 Eni Superbike World Championship at Imola, Italy, April 1.  Aboard the Effenbert Liberty Racing Ducati 1098R, McCormick backed up his result from the opening race of the day in round two of the SBK Series at the famed Italian venue.

Starting from 22nd spot on the 25-strong grid, McCormick jumped up to 18th on the first lap, and then began a battle for position near the back of the busy mid-field group.  Early on McCormick diced with the BMW S100 RR of Ayrton Badovini, before running with the Crescent Fixi Suzuki GSX-R1000 of American ace John Hopkins.  Then McCormick renewed his race one dispute with the works Honda CBR1000RR of Hiroshi Aoyama, before completing the 22-lap race in a tussle with the Kawasaki ZX-10R of David Salon.

“I was in a battle there, my pit board said ‘zero’ each lap, so that kept me going the whole way,” started McCormick, referring to his race for 15th position and the final World Championship points.  “My fastest lap was a 1:50.1, and I did a 1:50.3 on the last lap, and all my laps were all in the 1:50 range, so I was pretty consistent, more so than that crazy first race, and I was pleased for sure with that.”
“The bike is getter better every session, we’re working on the front end, making it stiffer, and that helps me with my front braking,” continued the 2011 Canadian Superbike Championship winner.

“It was the same kind of thing with Hopper (John Hopkins) as in the first race,” he went on. “I was with him, but then I got involved in the battle with Aoyama, he passed me, and that messed us both up, and we lost track of Hopkins.”

In the final few laps of the race, McCormick traded position back and forth with Spain’s Salom, the dispute perhaps offering the chance at the final points paying position.  The duo were catching 15th pace runner Badovini during those final laps.

“Yeah, we got at it near the end there, number 44 and me,” explained McCormick.  “He really put up a fight, with about three laps to go he tried his best to make a break, but I managed to get back past with a lap to go.”

McCormick was riding with the aid of some special medical bandages place on his left shoulder at the track’s clinic prior to race two.  “They fixed me up with these icy-hot type things, and that made a difference, in terms of comfort over forty minutes on the Ducati,” confirmed McCormick.  “I hadn’t done too much riding this year, let alone at Mach 300 here at Imola!  The problem is that all the braking areas lead into left handers, so it’s really hard on that shoulder.”

Overall, the series rookie was pleased with his riding, commenting that “our performance was really good, I was hangin’ in with those fast guys, maybe we were down on top end speed just a bit, but that’s always a bit of a trade off.”

“It’s still a little weird riding the Ducati, for sure I’m still on the learning curve; for instance, I’m really worried about stalling at the start,” laughed McCormick, who nonetheless made up spots on the first lap of each race.

“Now I’m looking forward to the next round at Assen (in the Netherlands), and I’m excited to know that the training I’ve been doing is paying off with the fitness to handle two long races in an afternoon in this series,” finished McCormick.

Today’s final Superbike race was won by Carlos Checa on the Althea Ducati 1098R, marking the first doubleheader triumph of the season for the reigning SBK World Champ.  Checa again chased and caught the Kawasaki ZX-10R Ninja of second place finisher and pole sitter Tom Sykes, who came under considerable pressure from the fight for third. 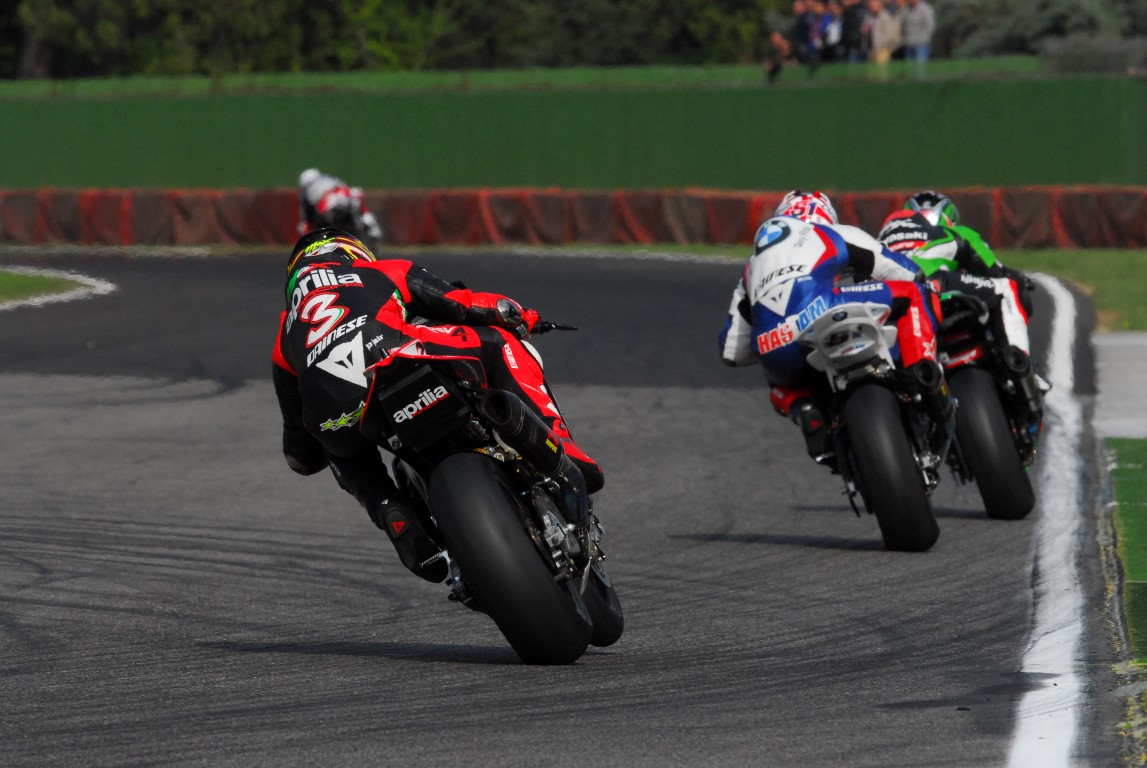