The 2012 Triumph Scrambler riding into the sunset.

The Scrambler is the gruff and in-your-face member of Triumph’s classic lineup, the no-frills, badass brother to the Bonneville and Thruxton. If the trusty Bonnie is the Triumph family’s pride and joy, the Scrambler is the one who stays out way too late and shows up for breakfast with a hangover, wearing the same clothes he left the house in the night before. The Thruxton, on the other hand, is the clean cut athlete of the Triumph classic family — a sleek, sporty café racer inspired by the hallowed English racing circuit from which it got its name. All three models share the same 865 cc, fuel-injected parallel twin engine, so you really need to ask yourself: Which one am I? 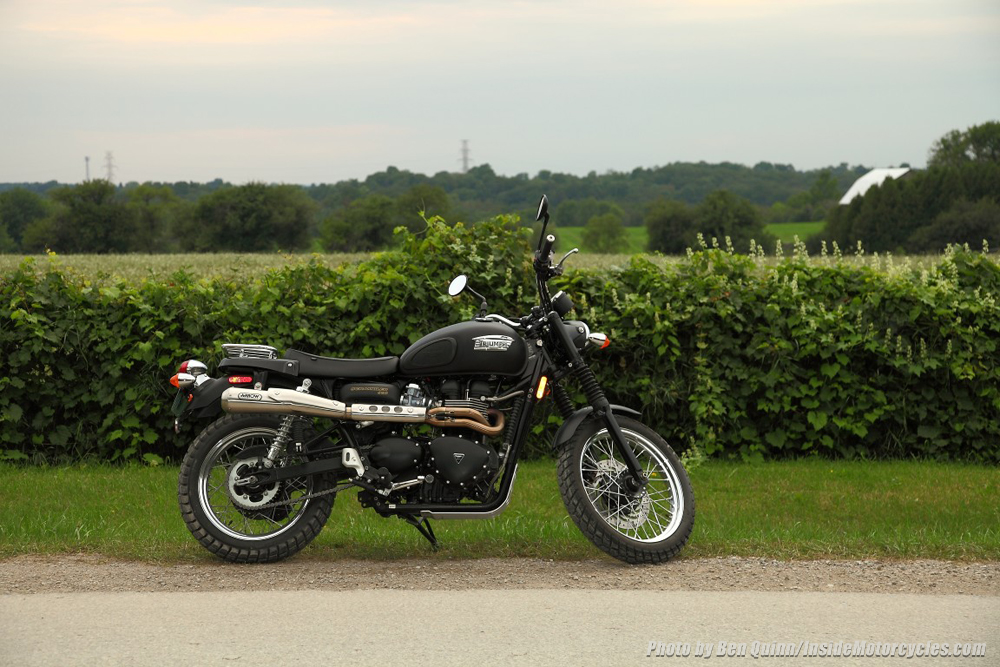 Despite an engine that only pumps out 58 horsepower, the Scrambler is a real bruiser. It’s a little Mad Max, a little Steve McQueen, and it looks like it was custom built for the next Hollywood zombie apocalypse movie; all it needs is a set of machine guns mounted out front.  It’s got loads of attitude, from the chunky Bridgestone Trail Wing tires on spoked rims to the unique exhaust note thumping out of the radical high-swept exhaust. The flat paint job (pick black or green) and blacked-out engine cases emphasize the bike’s aggressive stance. 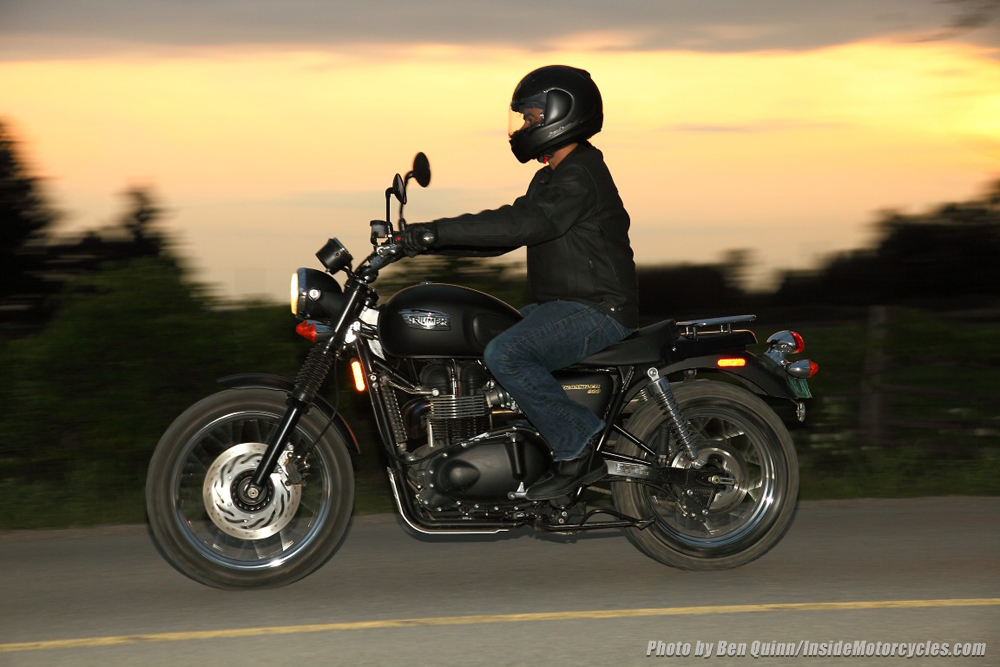 The Scrambler faithfully honours its predecessors, those ‘scrambler’ bikes of the sixties that were ridden in the ISDT (International Six Days Trial), most famously by McQueen himself. It’s tall like an off-road bike, with an 825 mm (32.5 in) seat height, while those unique high-swept chrome pipes not only look rad and set the Scrambler apart from any other motorcycle on the road, but they also provide a lot more ground clearance than a conventional system. A skid plate, wide motocross-style handlebars and fork gaiters enhance the off-road attitude. And while the tires aren’t designed for serious off-roading, they didn’t let us down when we ventured onto some dry rugged terrain on a few occasions. Gravel roads will beg you to twist the throttle and break the tire loose, the closest you’ll get to being McQueen without driving through fields and jumping fences. 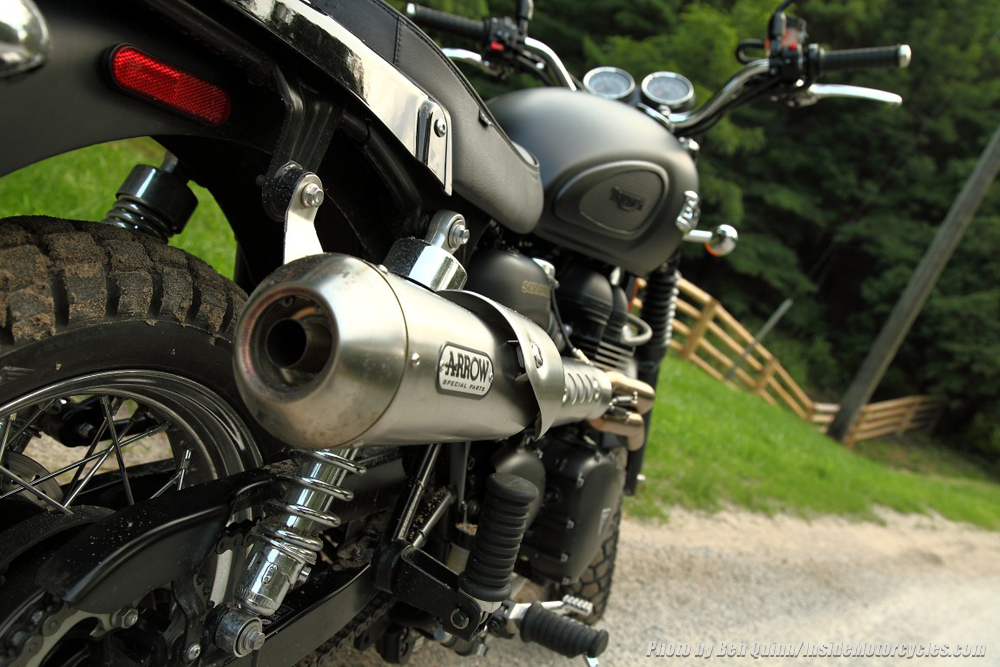 But contrary to what its off-road attitude may suggest, the Scrambler is really intended for the pavement, and on the road it’s just downright fun to ride. We also tested the Bonneville T100 at around the same time (see the current issue of Inside Motorcycles, Vol. 15 Issue 6, for a full review), and we think the Scrambler just might have the edge when it comes to pure riding enjoyment. Wide handlebars make it more flickable in turns, the throttle is smoother, and despite it being 50 mm taller than the T100, once underway it handles better. Suspension consists of Kayaba components front and back, while single disc brakes with 2-piston Nissin calipers do the stopping. The riding position is relaxed, albeit a little tight in the legs, and the high exhaust does emit some serious heat in the upper calf area, which rests on the small heat shield. Wear tall boots and proper pants and you won’t notice it too much. A simple analogue-style speedo and tach includes a small digital display that includes an odometer, tripmeter and clock. 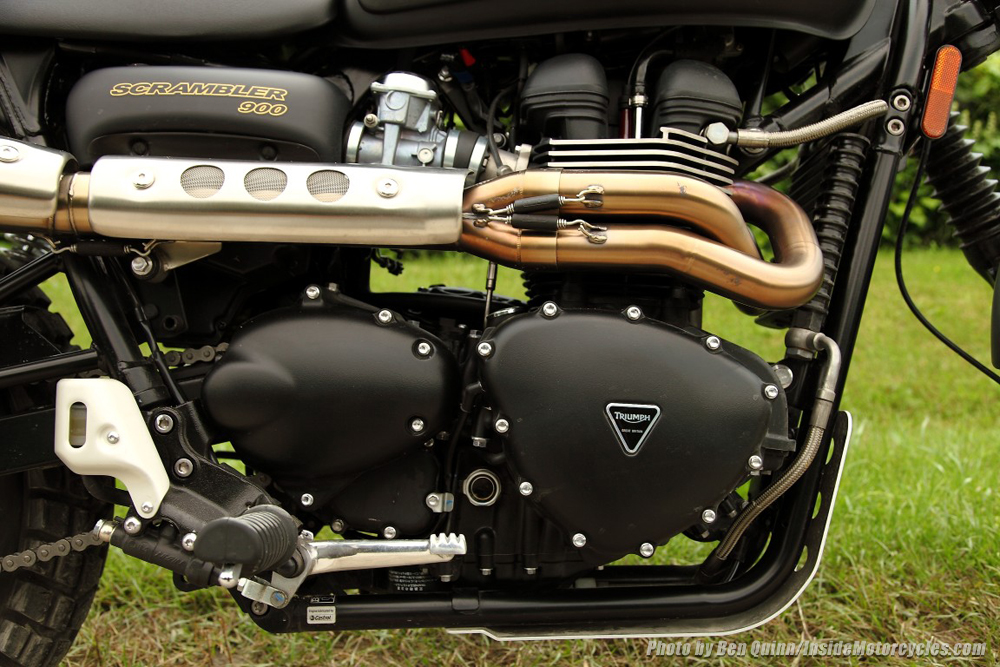 The Scrambler trots along at about 4,250 rpm on the highway, with lots of revs left if you feel like twisting it wide open. The firing interval on the Scrambler’s 865 cc engine has been modified to 270 degrees (from 360 on the Bonneville and Thruxton), giving it a throaty, almost V-twin-esque growl that sounds even more raw coming out of the optional Arrow exhaust that our tester was equipped with. You’ll want to crack the throttle down low just to hear it roar.

The claimed 16-litre fuel tank was the one serious sore spot with us, though. You see, after routinely filling up the tank after the gas light came on and only getting 12 litres into it, we figured that the fuel light was set to come on waaaaay too early. Based on the claimed capacity and our fill-up numbers, we figured that there must be four litres of gas in the bike after the light comes on. Imagine our surprise when the Scrambler unexpectedly ran out of gas one day (fortunately just across the road from a gas station) much earlier than expected. Filling it up from completely empty, the tank wouldn’t take any more than 14.25 litres to the brim — a far cry from the claimed 16 litres.

At an MSRP of $9,999, the Scrambler is a ton of fun for the money. With a set of serious off-road tires, you could turn this thing into a really adventurous dual sport machine, if that’s your fancy. If not, just sneak it off the pavement once in a while and let out your inner McQueen. 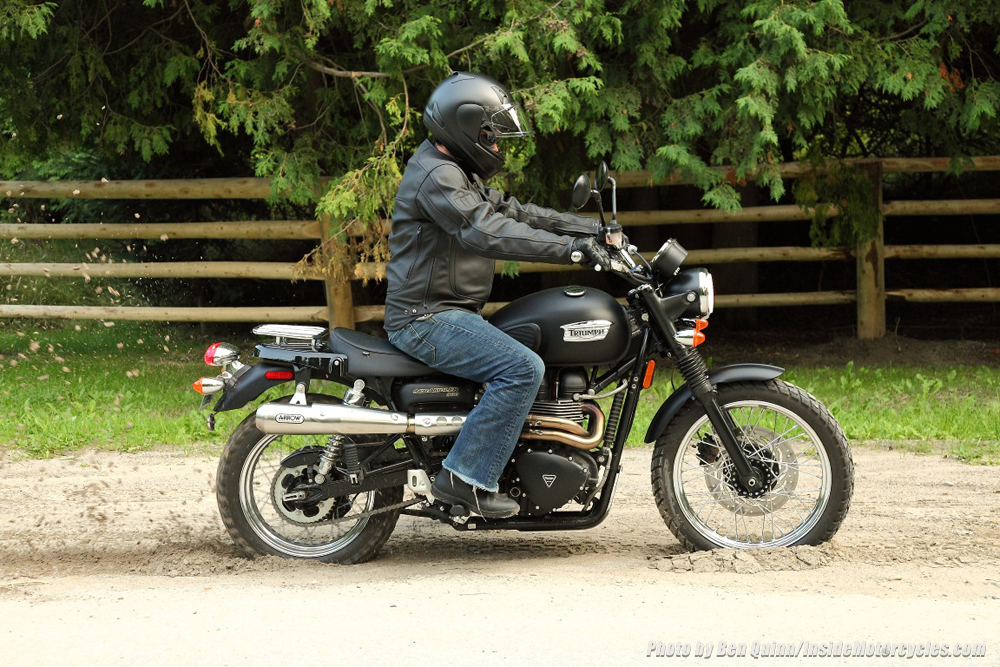 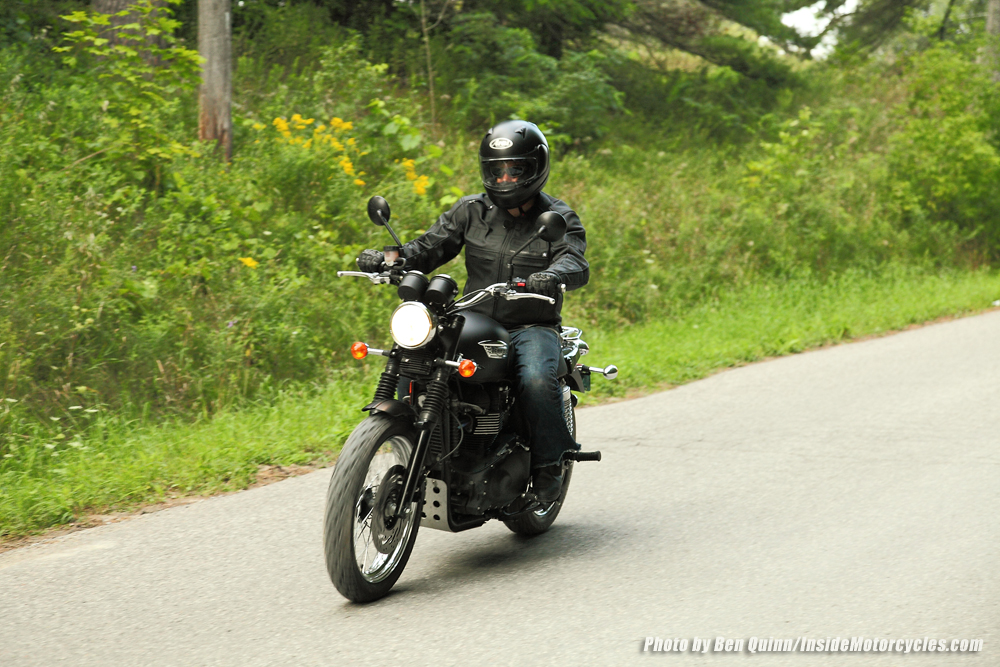 Pedrosa off to fast start in Japan