The Canadian Supermoto season came to a close last weekend with the season finale at Shannonville Motorsports Park in Shannonville, Ontario presented by the Supermoto Ontario Club. Sunny skies welcomed racers from Ontario and Quebec and a great day of racing was enjoyed by all.

The racing got started with the SM1 Semi Pro class. Stephane Dupont lead the pack into turn one ahead of Marc Andre Viens and Tommy Fortin. Sam Harris, who started 4th, made his way around Fortin in turn 2 of the paved section. Half a lap later Harris also passed Viens through the esses pavement section and set his sights on the leader.  Once Harris reeled in Dupont he cut to the inside of him onto the front straight and took the lead into turn 1. As the riders entered the dirt section Dupont took the lead back as he jumped past Harris on the table top. Harris stayed close and passed Dupont back for the lead on the inside of the sweeping left hand paved corner. Harris was able to open up enough of a gap where he wouldn’t get passed back in the dirt section and held on for the moto win.

Dupont grabbed another holeshot in moto 2 ahead of Harris Viens and Fortin. Steve Scharfe was able to get around Fortin to secure 4th place. Harris stayed close to Dupont as the two opened up a gap on 3rd place Viens but was unable to pass for the lead. Dupont took the moto win and earned the overall victory over Harris and Viens. 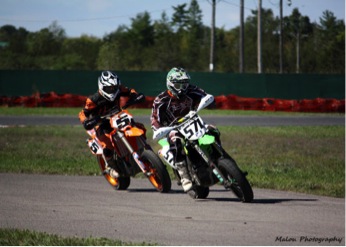 Consistency paid off for Marc Andre Viens as he won the SM1 National Championship. Dupont’s race win gave him 2nd in the points and veteran racer placed 3rd overall.

As the Veteran class left the line Andy Cule won the drag race to the first corner with Frederic Belanger and Chris Barendregt close behind. Barendregt cut to the inside of Belanger in the dirt left hander and took 2nd place. On the next lap Cule came into the dirt a little too hot and blew over the first berm. This allowed Barendregt to take the lead. Cule was able to regain his lead through the left hand paved sweeping corner. Belanger got a good run on Barendregt down the front straight and passed Barendregt into turn one for 2nd place. Belanger mounted a charge, caught the leader and moved into 1st place as him and Cule entered the dirt section.  Belanger would hold the lead to the end for the win over Cule and Barendregt.

In the SM2 250cc class it was Steve Scharfe who led the pack off the start ahead of Mathieu Gagne and Jean Philippe Benoit. Scharfe opened up a lead and took the wire to wire victory over Gagne 2nd and Benoit 3rd. 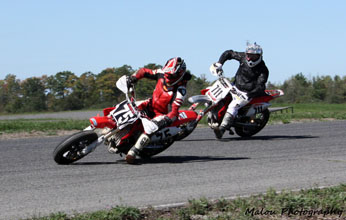 The SM2 Championship went to Steve Scharfe having lost only one race all season. Jean Phillipe Benoit placed 2nd and Gagne 3rd overall.

Serge Benoit took the Novice class lead into turn one ahead of Robert Masse and Patrick Corcoran. Coming into the chicane Masse pushed the brakes a little too hard and low sided giving Corcoran 2nd place. Corcoran and Benoit had a great battle for the lead exchanging it a hand full of times. Evan Okopny made his way into 3rd place by powering his 510 Husky past JeanPhilippe Benoit’s 250 allong the front straightaway. Serge Benoit made a final pass for the lead as he jumped past Corcoran over the dirt table top and held the lead to the finish. 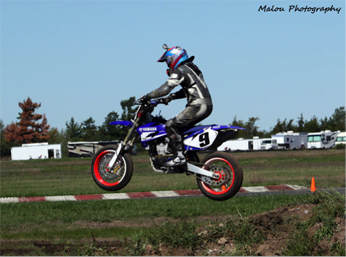 Consistent top finishes like this one landed Serge Benoit the Novice National Championship win ahead of Robert Masse 2nd and his son Jean Philippe Benoit 3rd.

When the flag flew signalling the start of the Amateur ATV race Michael Marcil jumped out to the early lead ahead of Jonathan Jans and Jordan Molenaar. Sebastian Careau started to work his way through the pack by passing Molenaar down the front straightaway. Careau would then cut inside of Jans for 2nd around the left hand sweeper but Jans would keep 2nd heading into the chicane. A lap later Careau made the pass on Jans stick as they exited the chicane. Careau then caught Marcil and passed for the lead in turn 2 of the paved section. Jans also made it past Marcil to maintain 2nd place.  Careau took the win with Jans 2nd and Marcil 3rd.

Jean Charles Desjardan’s 6th place finish on the day was enough to maintain his points lead and claim the Amateur ATV National Championship. Michael Marcil placed 2nd and Pierre Tanguay rounded out the podium in 3rd.

The Open Amateur holeshot went to Stephane Dupont ahead of Albert Cule, Mike Maloney and Keith Fowler. Dupont quickly opened up a lead which he would hold uncontested the entire race. Behind him Mathieu Gagne passed Fowler for 4th over the dirt double jump. Evan Okopny passed Serge Benoit for 6th by knifing inside of Benoit in the first dirt corner. Dupont took the win over Cule and Maloney.