I can’t believe it’s almost February and here in southern Ontario we haven’t really felt the effects of old man winter at all. Some days, the positive temperatures have me thinking of spring and the upcoming supermoto season.  2012’s arrival has a lot of new developments going on in the world of supermoto.

The asphalt surfing will continue, albeit on a different scale this year. The new Supermoto Ontario club will offer affordable practices bi-monthly at the new track being developed in Drumbo, ON, just between Woodstock and Kitchener off the 401.  The guys from Supermoto Ontario had an awesome display at the International Motorcycle Supershow in January and I was able to get a glimpse of the proposed dirt section, and it looks amazing.

The bike show generated a lot of interest in the new club, and I am looking forward to seeing all the new faces at the new track. The club will focus on building a rider base in 2012 by offering a friendly atmosphere for all, where the experienced riders will help with riding technique and bike setup – definitely a bonus for anyone who wants to try it out.

The Quebec races will return this season with the Supermoto X Fest at Mecaglisse, a world class facility featuring full grids that make this an excellent event.  The H Games event in Carignan offers fans an up close view of Supermoto racing, with a live DJ and freestyle motocross to entertain throughout the day. 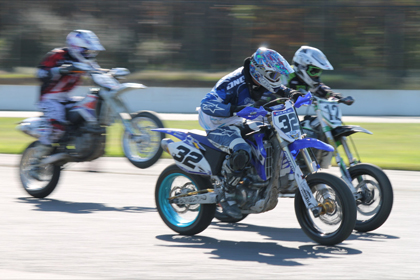 Our American friends have made some big strides too! Dave Duprey from MISuperMoto has released the series’ schedule, with two of the four events taking place on the city streets in West Branch and in Wayne, Michigan. Anyone who went to last year’s event in West Branch will tell you how amazing it was racing through the streets in front of thousands of spectators. Going over the 50-foot tabletop right on the main street was impressive, especially for racers!

Another very exciting development is the return of professional supermoto racing in the US after a two-year hiatus. The six-race schedule will have top talent from around the United States and some Europeans battling for the championship once again. USA Pro Supermoto has secured the Italian tire manufacturer Goldentyre as a major sponsor for the next three years. This development, coupled with a bike and parts manufacturer for rider sponsorship, will definitely help to get the grid positions filled.

Out west, the BC Supermoto Association has six races planned for 2012, all at the Tradex Exhibition Grounds at the Abbotsford Airport, located in the Fraser valley outside Vancouver.

Although 2012 looks to be a building year here in southern Ontario, there are a lot of new developments to be excited about in the world of Supermoto.  Please share your comments and links to all things supermoto here at the blog so we can all stay connected.

Thanks and take care!
Andy Cule